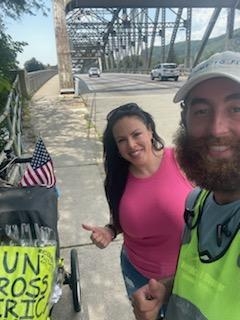 NEWBURYPORT – After running more than 3,000 miles from the west coast, Mike Wilson will arrive Sunday afternoon, August 22 on the Merrimack River waterfront.

If you want to join him on his last 38 miles from Boston Common on his Run Across America to raise money for two organizations that help alleviate the pain of cancer, he plans to leave at 5 a.m. so he can arrive here at 3 p.m.

He expects to attract a crowd of runners and bikers joining him for the last few miles of his cross-country run. If you are looking for a way to stretch your legs Sunday, join him at 5 a.m. in Boston or along the way. Pushing his running stroller, which carries his food, water and tent, Mike should not be hard to find.

At the waterfront, he will be greeted by friends and family at an event being organized by his employer, Planet Fitness in Portsmouth. If you can’t run with him, join the supporters who will welcome him home.

When the Town Common found him last weekend, as we have every week of his run, he had 155 miles left before he reached Boston. He camped out one night last week in the Berkshire Mountains with a group of “through hikers,” people who were hiking the Appalachian Trail from Maine to Georgia.

Mike has run the Appalachian Trail twice, so he had much to talk about with the “very cool” hikers, he said. On one run along the trail, he was attacked by a pit bull, which cut the run short.

This week, the Berkshire mountains, which include Mt. Greylock, at 3,491 feet is the highest point in Massachusetts, are “killing me,” he said. Although they are nothing like the Rocky Mountains, which he climbed early in the Run Across America, but at the end when his legs are tired and his shoes worn out the Berkshires were proving to be challenging.

He is running cross country alone with only a running stroller to carry his essential supplies. There is no car or van following behind. He is looking forward to seeing lots of friends, family and supporters welcoming him at the finish.

To support Mike on his historic journey, consider donating to Lucy’s Bus. His goal is raising $35,000. 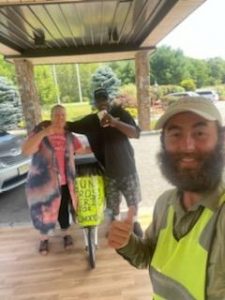