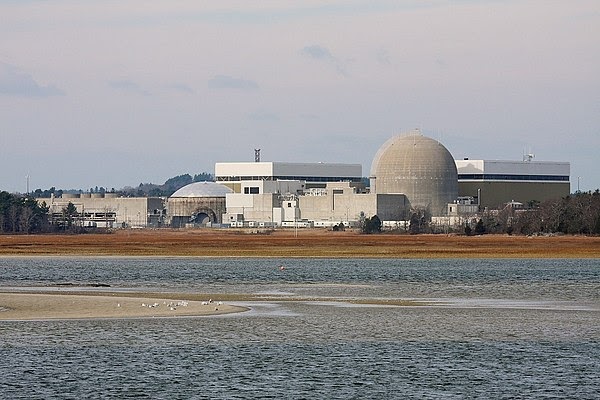 REGIONAL – The Nuclear Regulatory Commission (NRC) slapped the wrist of Seabrook Station Thursday for not projecting the likely deterioration of its structural concrete caused by alkali-silica reaction (ASR).

In a 20-page quarterly inspection report, the NRC issued a Green finding, its lowest level of citation, to NextEra. It found that the staff of the New Hampshire nuclear plant “did not adequately account for the future progression of ASR in their prompt operability determination for several Seabrook structures.

“Specifically, NextEra staff did not trend and project the periodic threshold monitoring data for the affected structural elements to ensure the structures would remain capable of performing their safety functions to the next scheduled inspection.”

During their walk-through of the plant, the inspectors also found that three structures – the emergency feedwater pumphouse, service water cooling tower and control and diesel generator building – had widening cracks that exceeded the design limits. The mechanical penetration area also has cracks that are approaching the limits.

Once a threshold limit is exceeded, more frequent inspections are required and may result in corrective action such as a structural modification to alleviate the condition, the report stated.

The 30-year-old atomic reactor has concrete infected by ASR, an irreversible type of concrete degradation, caused by water reacting with the concrete. It has been called “concrete cancer.”

The inspectors were also concerned with the degradation of the steel rebar in the concrete structures.

The NRC report from the inspection conducted in June was released two days after NRC Commissioner Jeff Baran visited the plant for the first time to learn about Seabrook’s degrading concrete.

C-10 Research and Education Foundation, a watchdog organization in Amesbury that monitors the safety of the plant, said it is pleased that “The NRC’s resident inspectors are doing their job and holding the licensee accountable to the safety provisions in its operating license.”

Natalie Hildt Treat, C-10 executive director, said, “While it is disappointing that NextEra has been cited for not properly analyzing the data to project whether the plant’s concrete structures will be able to perform the required safety functions, C-10 is heartened by the level of detail in this NRC report.

“The public should feel more confident knowing that Seabrook’s ASR problem is getting tough scrutiny by the NRC’s inspectors.”

Treat met with Baran and his staff by video on August 3 to ask that the NRC require more oversight and greater transparency into Seabrook’s concrete monitoring. She told the commissioner that the inspection reports were getting thin and had little useful information.

C-10 gave Baran a lengthy list of questions to ask NextEra during his visit. The NRC staff is expected to answer the questions in the next few months.

“These license conditions would not exist were it not for C-10’s tenacity in pursuing stronger oversight of Seabrook’s degrading concrete since it was first discovered in 2009,” Treat said.

In late 2020, the NRC’s Atomic Safety and Licensing Board issued a ruling in a legal challenge brought by C-10 relative to Seabrook’s ASR testing and monitoring program.  While the Board ultimately approved the plant’s concrete management program, it did so with four new license conditions that direct NextEra Seabrook to conduct much more frequent and stringent monitoring and engineering evaluations in a number of situations. They were:

“It’s frightening to think that were it not for C-10’s challenge, the inspection interval referenced in this report may have been as long as a decade,” Treat said. “Now NextEra has to perform them every six months. But collecting data without using it to model future trends in concrete degradation is of little use.”