Why Is There a Piano on the Boardwalk? 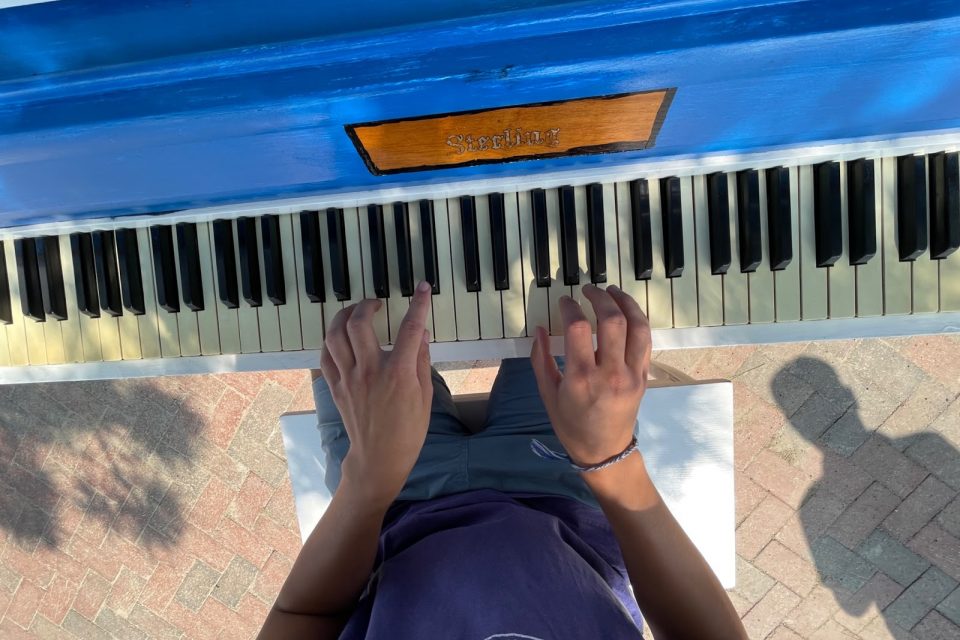 Mateo McDermott at the piano on the boardwalk. Photo by Stewart Lytle

MERRIMACK RIVER WATERFRONT – Want to channel your inner Billy Joel, Elton John or even Jerry Lee Lewis for the waterfront crowd this summer?

Virginia Technology University junior Mateo McDermott on Sunday afternoon rolled out into the waterfront sculpture garden a refurbished, brightly painted, upright piano so anyone can tickle the ivories. Until the last week in August when he returns to college, anyone can play on his piano and even belt out a favorite tune.

All for mental health.

On the first Sunday of Yankee Homecoming, McDermott, surrounded by his father, Frank McDermott, and friends Alex Kelleher and Aidan Mone, Mateo played songs to the delight of crowds walking along the boardwalk.

McDermott, who grew up on Plum Island, graduated from the River Valley Charter School and Newburyport High School, got the idea when he sat down to a piano in Blacksburg, VA, home of Virginia Tech, and indulged his passion for the piano by playing a few songs.

People stopped to listen then as they did Sunday on the Newburyport waterfront, and someone tipped him five dollars.

“I can make money doing this,” he realized. Also he thought he could raise money this summer in Newburyport for mental health and help fund projects by e-NABLE, a global on-line community that builds prosthetic limbs for those missing arms and fingers.

Piano players and those enjoying the music on the waterfront are encouraged to contribute to his efforts through a Venmo account. Look for signs on the piano explaining how to donate.

Working with a grant of $250 from the Massachusetts Assn. For Mental Health, McDermott took his idea to Mayor Donna Holaday, saying “The piano is for the community.” The mayor liked it and asked her chief of staff, Donna Musumeci, to introduce Mateo to the Newburyport Waterfront Trust, which has authority over what happens on the waterfront.

The trust also liked the idea and suggested that he place the piano in the sculpture garden on the west end of the waterfront boardwalk. The board members’ only worry was how McDermott was going to protect the piano from rain.

Trust Vice Chairman Matthew Pieniazek met McDermott and Musumeci at the sculpture garden late last week and learned that the bio-engineering students planned to use a humidity and temperature gauge to alert him that rain was coming. The nearby Greater Newburyport Chamber of Commerce offered to host the WiFi for the gauge. When rain is on the way, McDermott and his friends plan to put a cover on the piano.

The only problem: he didn’t have a cover. McDermott found a free piano in Berwick, ME, but it needed tuning, refurbishing and painting with a nautical theme. That used up the $250 grant.

Pieniazek readily agreed to pay for the cost of the cover.

In addition to mental health, McDermott, who is president of the e-NABLE chapter at Virginia Tech, is raising money to build prosthetic limbs for Charlie, a 10-year-old Haitian boy, who was born without arms or legs. The chapter used a 3D printer to build Charlie a prosthetic arm and a golf club he can hit balls with. “Donations dramatically help us pay for filament, tools, materials, and items that can help Charlie.

e-NABLE is an online global community of “Digital Humanitarian” volunteers from all over the world who are using their 3D printers to make free and low-cost prosthetic upper limb devices for children and adults in need. The open-source designs created by e-NABLE Volunteers help those who were born missing their fingers and hands or who have lost them due to war, natural disaster, illness or accidents.

There are approximately 20,000 e-NABLE volunteers in more than 100 countries who have delivered free hands and arms to an estimated 8,000 recipients through collaboration and open-source design to help those in underserved communities who have little to no access to medical care. Our volunteers are working hard to “Give the World a Helping Hand.”

McDermott turned to music to help his own mental health issues. “The piano and music, in general, have greatly benefitted my mental health especially during the darkness brought on by the Pandemic,” he wrote to the city.

Initially he tried to play the guitar, but the strings hurt his fingers.

So, he took up the piano. “I loved it so much, I couldn’t stop,” he said. Instead of practicing a few minutes a day, he practices for hours. Recently, he has been studying street musicians on YouTube and aspires to be as good as they are. 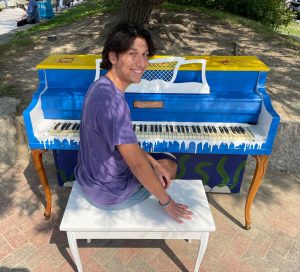 Asked how good he is now, McDermott defers to others, but says, “I’m pretty good.”

Now, it is your turn. Come down to the boardwalk and show off your talents on his blue piano painted with a variety of sea creatures, including a shark between your legs.