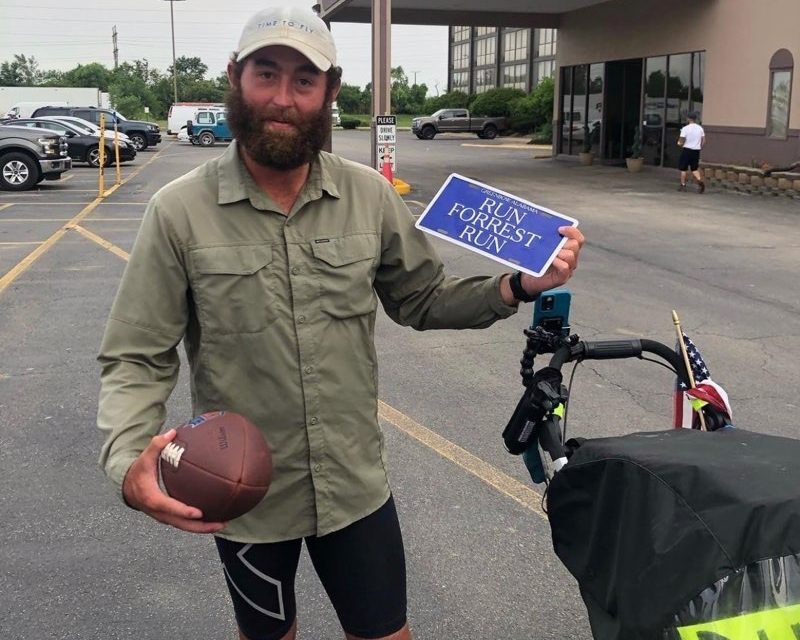 Forrest Gump is one of Mike's favorite movies. Photo by Mike Wilson.

The Illinois-Iowa Border – Mike Wilson dodged several tornadoes last week in Iowa as he excitedly crossed the Mississippi River at Clinton, IA, into Illinois, roughly halfway across the country on his Run Across America.

Mike is running across America from Oregon to the Merrimack River waterfront to raise money for two organizations, Lucy’s Love Bus in Amesbury and MaxLove Project in California, that help people cope with cancer. He hopes to be in Newburyport by mid-August.

He is making the run solo. He has no support team with a car or trailer following him from state to state.

In Clinton, he encountered a tour by the Chinese Association of Iowa, which was showing students from elementary and high school college campuses. Mike was asked to address the group, telling them about his experiences running cross country. After the speech, the leader of the group invited him to visit China.

Mike also met Larry, who has biked across America. Now 70, Larry started biking at 68. He is so fit, Mike, who is a professional trainer in Portsmouth, “thought he was 50.

“I’m so happy to have new shoes,” he said. The old ones felt like “I was running barefoot on the pavement.” It had a hole that collected rocks.

When you are running 40 miles per day, shoes wear out quickly. So does the running stroller. A new stroller is on its way.

Both the shoes and stroller, essential to his Run Across America, were mailed to him at a post office in Columbus, NE last week, but when he arrived in the eastern Nebraska city, the post office had relocated, and his package was sent back.

His other good news last week, when the Town Common caught up with him, was the temperatures across Iowa had dropped into the 70s. One day it rained, which pleased the farmers, he said. He also found several nice spots to pitch his tent at night.

Asked if he minded running in the rain, Mike said he was used to it having run for years in New England’s unpredictable weather.

Hoping to reach the Merrimack River waterfront by mid-August, Mike is halfway across Iowa, running and pushing his stroller on the historic Lincoln Highway, U.S. Highway 30, which was the nation’s first coast-to-coast highway. He is looking forward to reaching Illinois and Indiana, which are about 150 miles wide each. He expects to be able to cross each state in three or four days on his 3,000-mile cross-country run.

The shirts can be purchased for $20. Visit: lucyslovebus.org/mikesrun.

Pick up The Town Common or follow him on the website each week to track Mike’s progress across America. 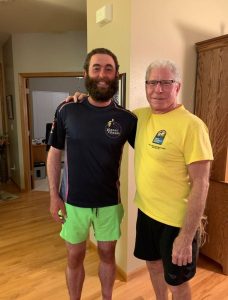 Mike Wilson and his new friend, Larry who biked across the U.S