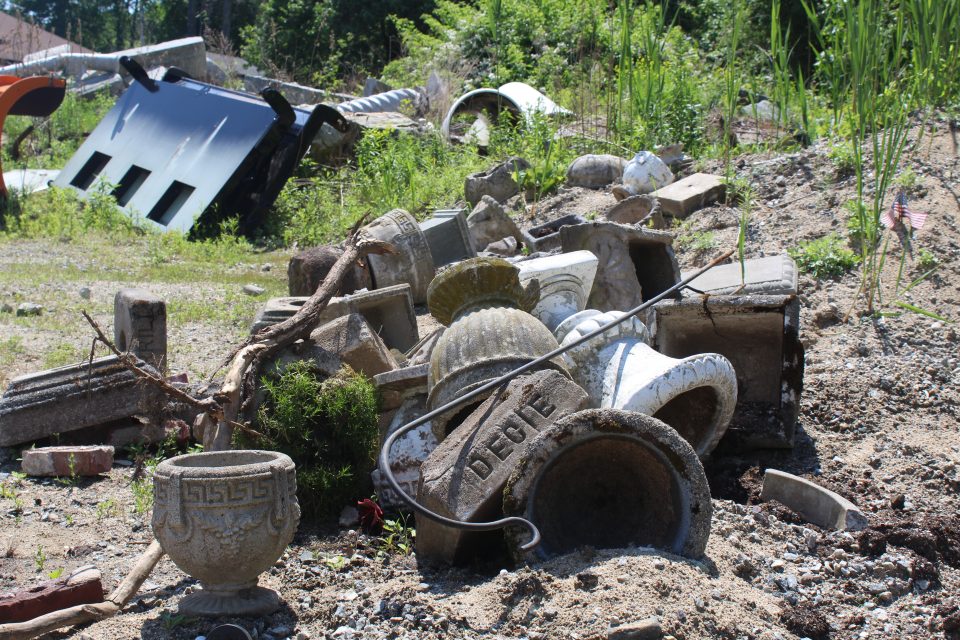 The urns removed from Long Hill Cemetery behind the DPW office. Photo by Stewart Lytle

SALISBURY — Only a few minutes remained last week in the otherwise peaceful monthly meeting of the Cemetery Commission when war broke out again over the maintenance of the town’s Long Hill Cemetery.

Chairman Gordon Frost was called “dictatorial” by Vice Chairman Ken Eaton during a shouting match over proposed changes in the maintenance. Frost accused Eaton of holding secret meetings at the cemetery with opponents of the commission’s policies.

A month ago, about 20 emotionally distraught residents came to the Town Hall auditorium to complain that the DPW had desecrated graves in the cemetery to clean up the cemetery by removing decades-old urns and other ornamental pieces on the graves. Some of the urns, whole and broken, ended up in a pile behind the DPW headquarters on Lafayette Road.

Without taking a vote at last week’s meeting, Frost and other members of commission told the Department of Public Works (DPW) director Lisa DeMeo to “finish the job” of cleaning the 15-acre cemetery on Beach Road. DeMeo had stopped the clean-up operation after the DPW was accused of stealing the urns and other items from the graves.

Frost said the DPW should notify relatives of those interned in the graves before they remove any items. “I don’t care if we have to put up an 8-foot sign at the cemetery,” Frost said.

DeMeo told Frost she had been waiting for the commission to decide if it wanted to change the rules removing urns, flowers, benches and shepherd’s hooks around the graves.

“The cemetery looks better than it has in years,” Frost said, as he urged DeMeo to continue the clean-up operation.

“People are going to be very upset,” said resident Connie Hellwig, the vice chair of the Historical Commission, who attended the meeting.

Sarty, who refused to stop talking during the meeting, was removed from the meeting by a police officer, but was not arrested.

Before Sarty was removed, she said she went looking for an urn honoring a World War II veteran in her family that had been at the gravesite since 1963. The urn was found in a pile behind the public works department, she said.

“It looked like it had been thrown out of a dump truck,” she said, “Like something out of Athens, Greece. How dare you desecrate these graves. You ought to be ashamed of yourself.”

Frost, who has been sharply criticized over the clean-up operation, conceded at this month’s meeting that DPW staff shortages had forced the town to adopt new policies removing items around graves that required crew members to use weed wackers, rather than grass mowers.

Town Administrator Neil Harrington announced that the DPW had hired an additional staff person this week.

The Frost-Eaton shouting match was over whether the commission had changed the rules at the last meeting to allow urns to be placed 14 inches in front or back of the headstones.

Fred Bishop, a resident and frequent critic of town policies and procedures, became outraged that the cemetery commission’s meetings were not being recorded and broadcast on Salisbury Community Television. “You hold these meetings at 11 in the morning, when most Salisbury residents are working,” Bishop said.

Harrington said the Board of Selectmen decide which town meetings are broadcast.

Rosemary Decie, whose father was a World War II veteran and Salisbury firefighter, petitioned the commission to allow her to place an urn at her father’s grave to the side of his headstone.

“If I place the urn in front or back of the headstone, it will be on someone else’s grave,” she said. “It’s weird to put something on another person’s grave.”

The commission made no ruling on her requested waiver.

April Koney, who has 64 relatives buried in the cemetery, asked the commission for permission to return the blue urn on her aunt’s grave to identify it. The urn served as a marker for the grave for decades before the DPW staff removed it.

“I found my urn behind the DPW,” she said.

“So, these graves are going to go unmarked,” Koney said.

The town acquired the cemetery from a private association in 2014. To manage the cemetery, the town created the cemetery commission but has had problems getting residents to volunteer for it. There is still one vacancy on the commission.