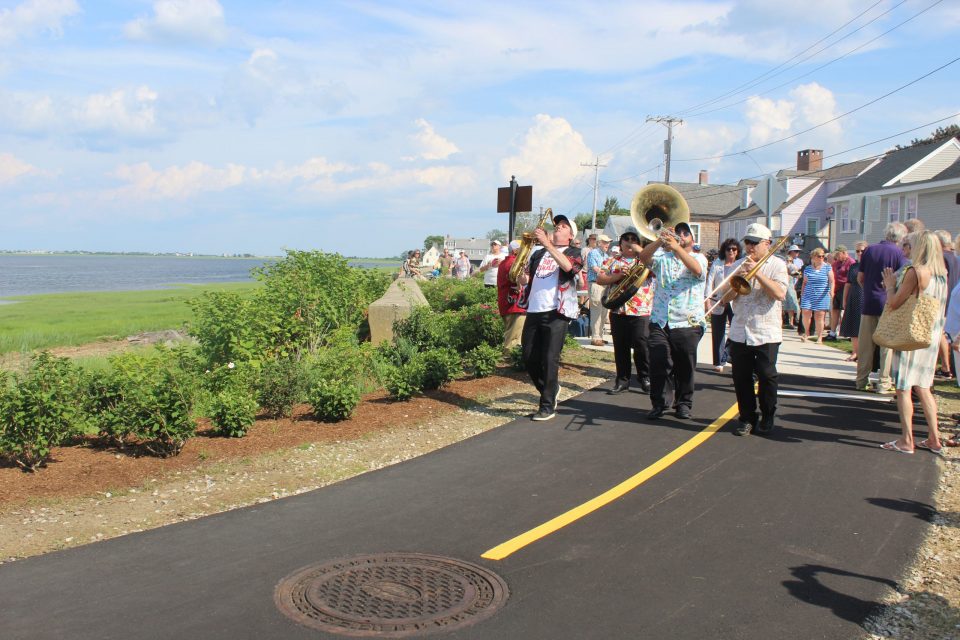 NEWBURYPORT – The temperature and the humidity along the Merrimack River felt more like the lower Mississippi River Wednesday as a Dixieland Jazz band led a crowd of rail trail enthusiasts in marching along the newly opened waterfront gap in the Clipper City Rail Trail.

“It has been so long,” Mayor Donna Holaday shouted to the crowd that gathered for the official ribbon cutting. The ceremony officially opened the 1,200-foot gap in the 1.5-mile trail that extends from the downtown waterfront through the South End to Newbury.

The mini-parade was led by the Hot Tamale Brass Band of Boston, minus its founder and leader, Mickey Bones, who had to be at Fenway Park since the Tamales are also the official band of the Boston Red Sox.

The gates and detour signs were taken down last week, allowing trail users for the first time to enjoy the views of the river at one of its widest and most scenic points.

For Geordie Vining, senior project manager for the City’s Planning Department, the opening of the rail trail was one of his most cherished achievements. He took a playful bow when the mayor recognized his work before the ribbon cutting.

Vining said recently that there has been “a lot of twists and turns to get to this day. But it is definitely worth it.”

Earlier he wrote, “The extension of the popular rail trail along the waterfront is an important piece of the city’s repurposing of the riverfront from a past industrial marine use to a current recreation and tourist attraction. This paved graded trail with multiple attractions will be within easy walking distance of the downtown for thousands of visitors and immediately accessible for thousands of residents from nearby thickly settled neighborhoods.”

In a statement to the Community Preservation Commission last year, Vining waxed poetic in describing what the waterfront section of the trail will mean. “The trail user’s views and experience of this extraordinary opening of the tidal river, bounded by the extensive natural beauty of the salt marsh on the other side and the barrier islands and the open ocean at its mouth, will be unique and special.

“This area of the river is part of the designated Great Marsh Important Bird Area, one of the most significant bird areas in Massachusetts and New England, and trail users will see large numbers of migrant waterfowl and raptors. The trail will also provide a platform to watch scenic seasonal boat traffic on the river.”

The city bought the land along the waterfront 15 years ago with plans to create a linear park. It had been railroad tracks used by the Boston & Maine Railroad and Guilford Transportation Industries.

As the trail was constructed, the cancer-causing chemical PCBs (polychlorinated biphenyls) were found on a 130-foot section of the old rail line. The PCBs, which were probably deposited in the soil by idling train engines, were removed last fall.

While the city dealt with the PCP problem, several winter storms in 2018 plowed up the river and eroded the riverbank. The erosion threatened not just the new trail, but also the city’s wastewater treatment plant behind it.

Rising seas is no longer a future threat to the city’s infrastructure, Vining told the CPC members last year. “The raised trail and its associated revetment will be a tangible example of climate change adaptation in an era of increasing storm surge and rising sea levels,”

In person at the CPC meeting he added, “The future is here and (the proposed protections for the trail were) not enough.”

As part of the shoreline resiliency project, which began in December, the city’s contractor constructed a sloped stone revetment wall to stabilize about 900 feet along the shoreline.

To be wheelchair compliant, the trail gradually rises between the American Yacht Club and Joppa Park.

The $1.3 million project received a $1 million grant from the state’s Municipal Vulnerability Preparedness Program, a $100,000 grant from the state MassTrails Grant Program and $150,000 from the Community Preservation Commission. The balance was funded from the Department of Public Works.

Like other sections, the city has installed signs, sculptures and seating along the path, including a swing at the highest point to allow runners to rest their legs while they enjoy the view.