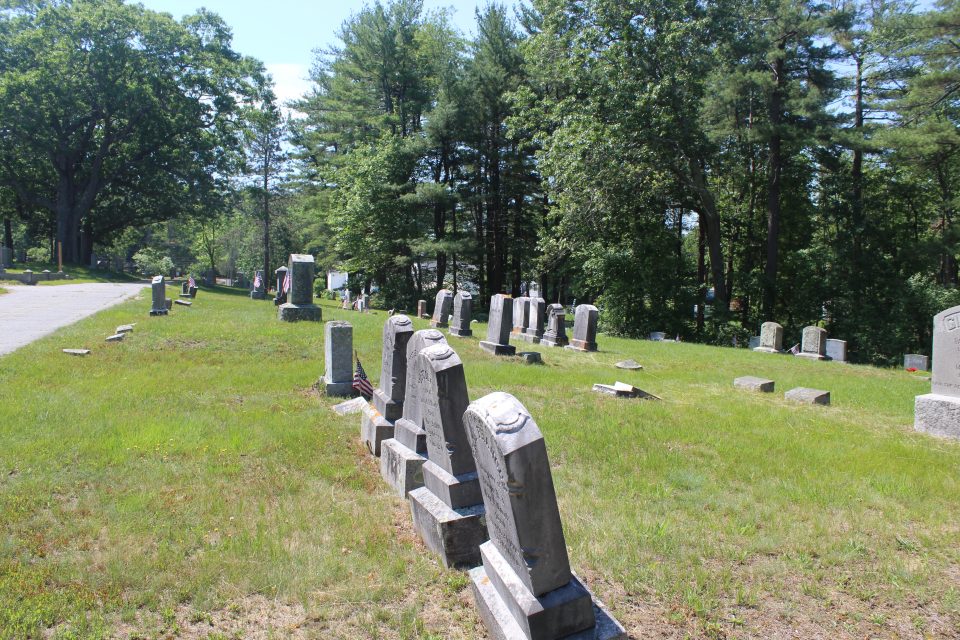 At the usually peaceful meeting of the town’s cemetery commission, about 20 emotionally distraught residents came to the Town Hall auditorium to complain that the Department of Public Works had desecrated graves in the town-owned Long Hill Cemetery by removing decades-old urns and other ornamental pieces on the graves.

“You’re all going to burn in Hell,” Susan Sarty told the town manager and cemetery commission.

When Sarty refused to stop talking, Town Manager Neil Harrington had her removed from the meeting. She was escorted out of the auditorium by a police officer, but was not arrested.

Before Sarty was removed, she said she went looking for an urn honoring a World War II veteran in her family that had been at the gravesite since 1963. The urn was found in a pile behind the public works department, she said.

“It looked like it had been thrown out of a dump truck,” she said, “Like something out of Athens, Greece. How dare you desecrate these graves. You ought to be ashamed of yourself.”

Harrington and Commission Chairman Gordon Frost, who took much of the criticism, told the crowd repeatedly that the town had made “a good faith effort,” to notify families of those buried in the cemetery about new regulations at the cemetery.

When asked why families were not called, Harrington said the previous cemetery owners “kept very poor records.” As a result, the town did not know who to contact about the removal of items.

Harrington said the urns were not broken by DPW employees or pitched out of the truck. They were already broken, he said.

In a letter to a complaining resident, Harrington wrote: “It is the families of the deceased who allowed their own memorials to deteriorate, crumble and fall apart to the touch.”

Harrington, who conceded that the cemetery cleanup operation could have “happened in a more caring way,” said the town would reimburse anyone who lost urns and other properties. “You should not have to suffer that loss,” he said.

But he rejected residents’ complaints that the town had “stolen” the urns and other items.

The town acquired the 15-acre cemetery on Beach Road, which was founded in 1849, from a private association in 2014. To manage the cemetery, the town created a five-member Cemetery Commission, but few volunteered to serve on it until 2019.

Because the town was receiving complaints that the cemetery was not well maintained, the commission spent a year, Harrington said, reviewing regulations by other towns with cemeteries and developing new rules. The town also installed a water line to the cemetery to help families water flowers.

“We are trying to be fair,” Frost said.

The DPW, which has four maintenance employees, was assigned to mow the grass. The urns, benches and shepherd’s poles around the graves made mowing difficult and time consuming. Some graves were poorly maintained by the families and were unsightly.

The urns removed from Long Hill Cemetery behind the DPW office. Photo by Stewart Lytle

So, the new rules, which were included in a newspaper legal notice in April and on large signs at the cemetery, limited the placement of urns to 12-inches in front of the headstone. They gave the DPW “the right to have anything removed from a lot that he/she considers to be objectionable or injurious to the use, purpose and uniform esthetics of any cemetery or in violation of any of the rules and regulations governing its operation.”

Darlene Joslin, who visits her family’s gravesite often, said the cemetery now “looks neat, but it feels cold as hell.”

She said her family members buried in Long Hill “are turning over in their graves. To have this happen is heart-breaking for my people.”

Joslin’s granddaughter left a small plastic statue, saying “Greatest Grandpa,” in front of the headstone. When she and the granddaughter returned few days ago, the statue was gone, she said.

Ken Eaton, a member of the commission, offered an amendment to the regulations that was approved two to one. It allowed urns and other items to be within 14 inches of the front or rear of the headstone. His change also required the DPW director to notify the commission of any future cleanup program.

Eaton was upset about the removal program, although he originally voted to allow it. He was most concerned about a bench near his wife’s grave. “Don’t take it,” he warned. “It has ‘Jesus Saves’ on it. That’s my religious right.” 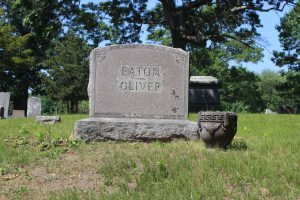 April Koney, who has 64 relatives buried in the cemetery, was upset about the removal of her aunt’s urn, which had her name on it to identify the grave. Now that the urn is gone, the grave is unmarked, she said. “Where did my blue urn go?”

Megan Murphy, whose daughter is buried there, asked “Who has the right to tell you how to mourn your loved ones? It’s not your responsibility. It’s my responsibility.” 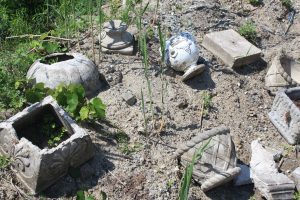 An urn in front of a grave at the Long Hill Cemetery. Photo by Stewart Lytle

Eaton said people grieve in different ways. He told the story of watching a man bring two beers to the gravesite. He drank one and poured the other over the grave.

Frost promised that the commission would take all the complaints into the consideration as it reviews the new regulations.