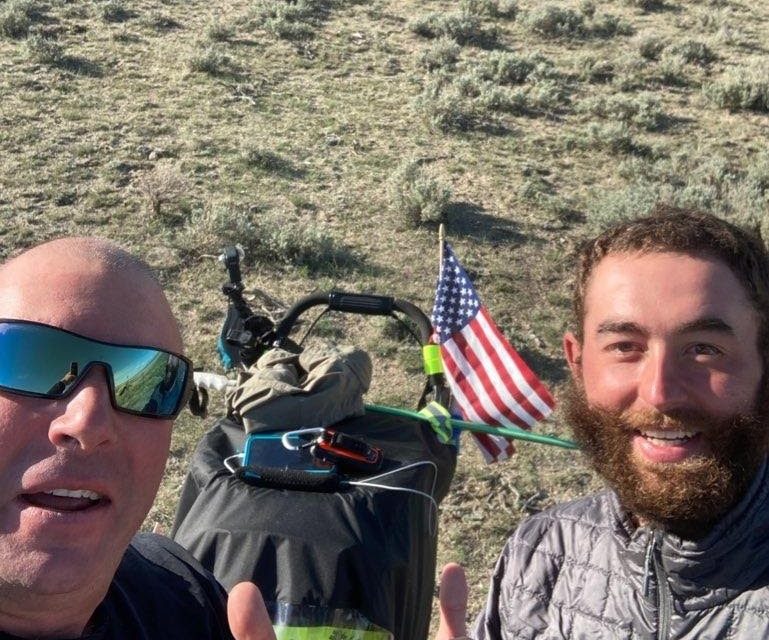 One Step At A Time

ROCK SPRINGS, WY — Mike Wilson started his Run Across America raising money for Lucy’s LoveBus in Amesbury and all the cancer victims and their families that it helps. But the personal trainer is also inspiring people he meets along the 3,000-mile route from the Pacific Ocean to the Merrimack River waterfront.

Last week, he made friends with several people as he descended from the Rocky Mountains into the high mountain desert of Wyoming. One carload of college students passed him on the road, circled back and brought him snacks and a drink. Hours later they were waiting for him in Rock Springs in central Wyoming to take him for a bite at an Applebee’s Restaurant.

A woman named Kitty gave him a ride from his motel on the outskirts of town to a grocery store where he replenished his food supply. He also exchanged stories and tips with another long-distance runner, who was preparing to run a 35-mile race.

Maybe the most memorable encounter was with a natural gas worker, Gabriel Beal, who was so impressed with Mike he posted about his encounter, writing on Facebook, “There may or may not be a reason my path was crossed with his, but one thing is for sure this was as Legit of an example of creating opportunities regardless of circumstances and the thrill of the great unknown all of us humans are capable of and making the most of our existence while on this Earth.”

Beal was on his way home from work when he passed Mike running about 25 miles from town. He did not think much about Mike until the next morning when he saw him again leaving his tent in a field.

“I have never seen another human in the last 10 years on foot at 6AM in the field with no vehicle on my work route,” Beal wrote.

Mike was packing up to begin his daily run, when Beale rolled down his window to say good morning. “A quick chat revealed he was running across America to help children with cancer with donations to both Lucy’s LoveBus and the MaxLove Project,” Beal wrote.

“I asked a few more questions as I was astounded where he spent the night as some of the coldest temps I have recorded on my dashboard were at this very spot, and the morning temp was brisk, but not below freezing like it was a month ago. When he told me where he was going, I told him I think you’re going the wrong way since Maine isn’t towards Rock Springs,” Beal wrote.

Mike explained he had started on a route through Arizona, but because of the extreme heat, he had rerouted to Oregon and ran across Idaho where he went over the Teton Mountain pass.

Beal said he found it amazing that Mike runs between 35 and 40 miles a day. “I have never met anyone that has or does run at this level, and it was remarkable to witness this with no chase vehicle or help of any kind, just a man on a mission,” Beal wrote.

The natural gas worker and long-distance runner talked about personal motivation, inspiration and how to go beyond one’s own self-imposed limits. “His (Mike’s) advice to me was take things little by little and don’t give up. One step at a time,” Beal wrote.

Beal wished Mike a safe journey and hoped their paths in life would cross again. “What a Savage!!!” he wrote.

The shirts can be purchased for $20 by visiting: lucyslovebus.org/mikesrun.