Mike Wilson Takes on the Rockies 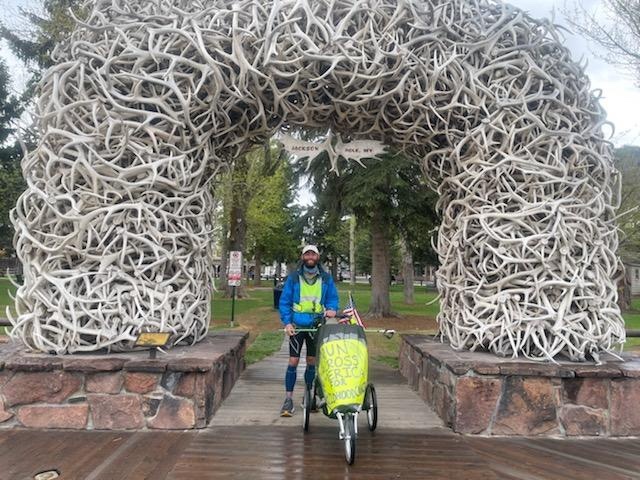 ROCKY MOUNTAINS – JackRabbit Newburyport, one of Mike Wilson’s supporters on his Run Across America, has a new game. It’s called Where’s Mike Wednesday.
When the Town Common caught up with Mike over the weekend, he was running through the Rocky Mountains, topping 8,000 feet above sea level as he navigated the Teton Pass at 8,432 feet.
That high, the air is very thin to breathe, particularly for a runner crossing the mountains. “For those of you new to the game, our pal Mike is running across America to raise money for Lucy’s Love Bus and MaxLove Project (link to donate!),” the Facebook post from JackRabbit Newburyport said.

Lucy’s Love Bus is a non-profit organization, which fights cancer by offering free integrative therapies such as acupuncture, reiki and massage to help balance the effects of traditional treatments. “Our most recent update has him arriving in Wyoming!! This would make Mike’s 4th state on his journey,“ the Facebook post stated. Mike has been hitting 40 to 50 miles per day, pushing a stroller with his essential gear. He sleeps out many nights, occasionally finds a motel and one night stayed with the owner of sold-out motel in her home. He has met many interesting people along the way. How to support Mike? FOLLOW Mike on his ig @mikerunsacrossamerica and Facebook Mike Runs Across America for updates (or drop him some encouraging DMs!) DONATE to his fundraiser! Mike’s run is already raising money, link to donate.

Planet Fitness donated 600 “awesome” t-shirts to help raise $12,000 for childhood cancer, Lucy’s Love Bug announced. “Buy yours today and wear it proudly knowing that every penny of your purchase will go to Lucy’s Love Bus and MaxLove Project!” The shirts can be purchased for $20, link here. Mike plans to finish his run on the waterfront of Newburyport in a couple of months. Pick up The Town Common or follow him on the web site each week to track Mike’s progress across America. In addition to New Balance and the Portsmouth Planet Fitness, sponsors include True North Ale Co. in Ipswich, Wire By Ryan in Byfield, Marge Bar and The Juicery in Newburyport and Vincent Bianco Custom Catering in Peabody.