Katy Ives Takes the Reins at the Chamber of Commerce 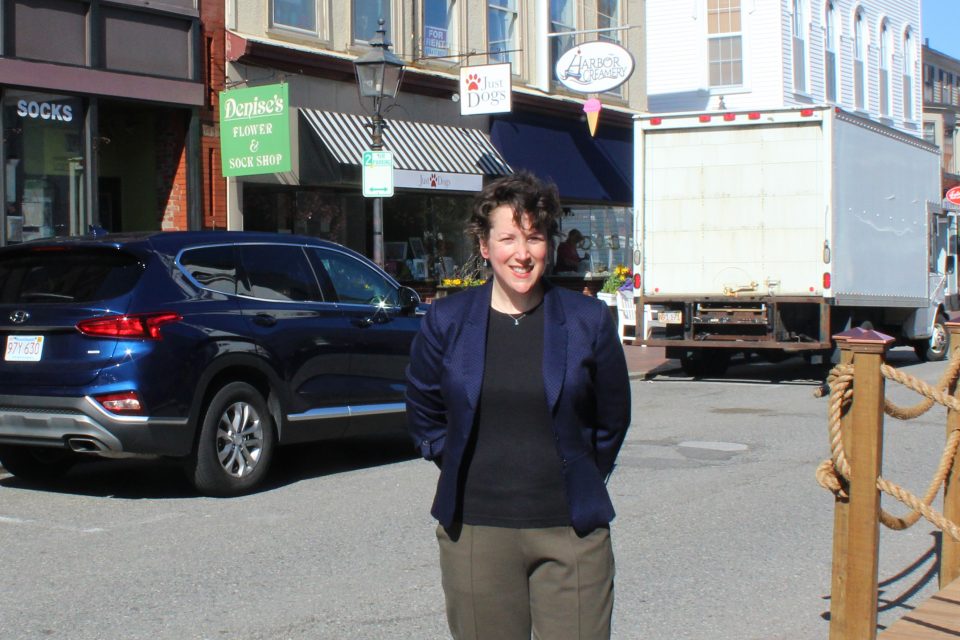 REGIONAL — Kathleen O’Connor Ives graduated from law school not because she wanted to practice law. Her interests were in government and specifically environmental issues. She won a seat on the Newburyport City Council in 2007 before she took the bar exam.

So, it was hardly a surprise to her friend Mark Griffin that she did not practice law very long at the firm of Finneran and Nicholson, where he is a senior attorney. She had joined the firm as an associate in 2019 after choosing not to seek re-election to the state Senate. She left the Senate after serving three terms to spend more time with her son.

Instead of practicing law, Ives threw herself into another passion, her e-commerce business, The Owl in the Towel, that developed and markets environmentally friendly hand sanitizers, deodorants and hand creams.

But as excited as she is about her natural products company, a bigger calling loomed on the horizon for the 44-year-old Ives.

“I didn’t know that Frank (Cousins) was thinking about retiring,” she said.

Cousins, whom Ives had worked with when he was Essex County Sheriff, was leaving his position as president of the Greater Newburyport Chamber of Commerce. In typical Katy Ives mode, she started jotting down things the chamber could do to help the greater Newburyport area.

“It is a strategic time in the life of this city,” she said. “We have to organize quickly.”

After filling two notepads with ideas, the lightbulb went on. She said she felt like the situation was “shouting out to her that I can help.” She asked herself, why shouldn’t she apply for the job?

Griffin, the outgoing chairman of the chamber board of directors, was way ahead of her. “Katy was the first person I thought of when Frank told us he was leaving,” he said.

About 20 people applied for the top chamber position, said Griffin, who formed a committee to review resumes and conduct interviews. But Ives was the obvious choice, he said.

She was elected unanimously by the board and began serving as president of the chamber this week.

“I am excited about Katy coming,” Cousins said. “She has lots of energy.” Having been a city councilor and state senator for a district that includes Amesbury, Newburyport and Salisbury, “she knows a lot of people.”

Taunya Wolfe Finn, owner of Wolf Tours and the new chair of the chamber, said Ives “listens well.”  The community and the chamber board are looking forward to her being president. “She’s ready to go.”

Wolfe Finn and Ives were already at work Friday, touring downtown to see the outdoor dining spaces and flower boxes on State and Pleasant streets.

“It will be good,” said Cousins, who is taking his decades of public service to the classroom. He said Ives’ experience in the Senate as co-chair of the Travel and Tourism Committee will serve the businesses in the region well.

Ives, who also co-chaired the Senate Community Development Committee, is bringing with her the notepads of goals she wants the chamber to accomplish. They range from helping existing businesses emerge from the Pandemic stronger than they were to attracting new businesses.

They also include immediate, practical things like building public restrooms that visitors can “write home about,” she said. And she is exploring the possibility of installing lockers for day trippers to store their purchases for a few hours while they take a break for lunch or dinner before they continue shopping.

Coming out of Covid is “uncharted territory,” Ives said. “What are the conditions on the ground going to look like?” Having been a small business owner herself, she feels a sense of urgency to help struggling businesses.

“If a business is in crisis, they should let the chamber know,” she said.

The chamber works with the city to help businesses apply for stimulus funds. She also wants to work with businesses to eliminate obstacles to their growth, including using stimulus money to build needed infrastructure and rewriting some zoning regulations.

She is prepared to take a deep dive into the issues the community faces, she said. “I feel like I am drinking from a firehose.”

The first year will be hard, a different challenge for her. But, she said, “It’s going to be good. “Everybody is working together to raise all boats.”

During her first year, Newburyport will elect new city leaders as Mayor Donna Holaday and council president Jared Eigerman do not seek re-election.

One thing she will not be doing is filling orders for Owl in the Towel hand creams, sanitizers and deodorants. “I am going to put that whole project on ice,” she said. But customers need not fret. She has contracted with a product fulfillment house to make sure orders are filled.