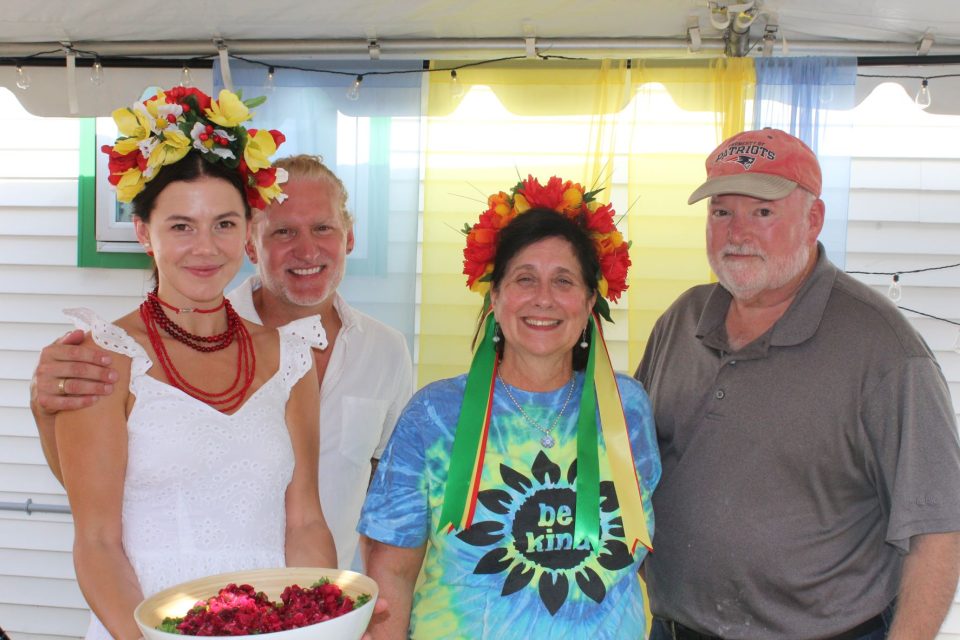 REGIONAL – For those who fly the Ukrainian flag, the liberation of the city of Kherson has brought joy during this holiday season. But for Jarred & Nadiia Sadowski, who live and work on Plum Island, it has brought new challenges as they try to send food and money to the residents of her hometown, Nova Kakhovka, including her parents.

“Since November 11th, as the entire north side of the Kherson Oblast Region was liberated, Nova Kakhovka became a front-line city,” Jarrod wrote last week to North Shore friends and supporters.

Nova Kakhovka, once a thriving city up the Dnieper River about an hour from Kherson, has been occupied by Russian troops since early in the war. “But now, Nova Kakhovka is in a critical situation” Jarrod wrote. “As Ukraine army moves forward (south toward the city) attacking Russians logistics and ammunition depots from a distance, Russians become more aggressive, which puts more risks for the people in the city and the entire Kherson region.”

Many of the volunteers, who were buying and delivering food with donations collected by the Sadowski, have left the city. The city, once with 45,000 residents, has only 15,000 residents left, many of whom live in bomb shelters or like her parents sleep on mattresses in their building’s hallway.

The Russians, feeling threatened by the Ukrainian army, control the hospitals, but have become more aggressive, questioning anyone who is caught on the streets. “We try to imagine how this must feel being a prisoner in your own home, living in an atmosphere of anxiety day and night. It is no less than terrifying,” Jarrod wrote.

The couple found new volunteers in October to distribute the food that is now twice or three times the price. They also send money to help those who are desperate.

Once the volunteers buy food or supply, they send a receipt to the Sadowski so they have a record of when and what was purchased. “So far this is working out, and we hope we can continue to help in purchasing more food and essentials for people in need,” Jarrod wrote.

“With your support our hope is to continue helping those remaining in Nova Kakhovka, by providing the much-needed funds to purchase food and essentials each and every day,” he wrote.

The Sadowskis have held three fundraising dinners where they and their families prepared and served traditional Ukrainian dishes. The dinners have been held at the Custom House in Newburyport and at Pub 97 in Groveland. 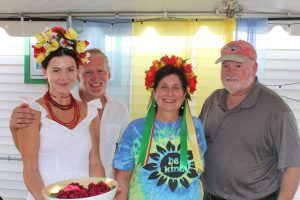 From left, Nadiia and Jarrod Sadowski, Bernadine and Terry Clifford at the 97 Pub fundraiser last summer for Ukraine.

Editor’s Note: Spelling of the city’s name can be either Nova Kakhovka or Nova Kahovka.