by The Town Common 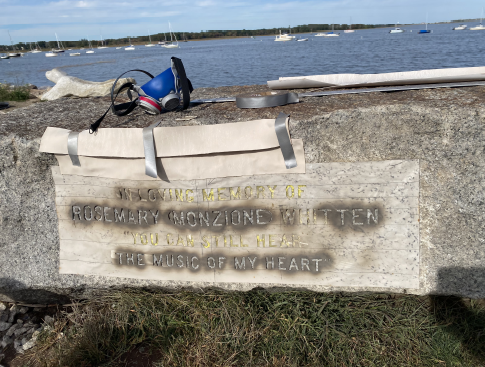 Parks Conservancy/ Foundation Ties ‘Confusing, Not Illegal’
By Stewart Lytle
NEWBURYPORT – Former Parks Director Lise Reid has disagreed with City Councilors that
the Morrill Foundation and Parks Conservancy have committed fraud in the handling of a
donation by Ann Marie Monzione who paid for a rail trail bench to honor her deceased sister.
Councilor Mark Wright last week criticized how the checks written to the conservancy were
deposited in the bank account of
The Mayor Gayden W. Morrill Charitable Foundation.
Wright, a banker, said unless there is a certificate on record that identifies the foundation as
Doing Business As (DBA), the conservancy’s practice of depositing checks written to it in the
private foundation’s bank account is “fraud.”
“We the city, previous councils, previous administrations have failed us,” Wright said.
“Collectively we have done a poor job.” He called the practice of depositing conservancy checks
in the Morrill Foundation accounts “a black eye” for the city.
In a memorandum at-large councilor Bruce Vogel sent to all councilors, Reid wrote: “There is
clearly a lack of information as well as mis-information being provided to City Councilors as
they publicly consider what they have suggested is fraudulent activity by the Newburyport Parks
Conservancy,”
Reid was fired as Parks Director last fall as part of Mayor Sean Reardon’s reorganization of the
parks management. The reorganization plan to move the parks maintenance to the Department of
Public Works has since been withdrawn.
Sharif Zeid, chair of the council’s budget and finance committee, told the council last week there
appears in the foundation’s tax returns to be about $1.3 million over nine years of “unaccepted
gift money” that has been funneled through the Morrill Foundation, acting as the conservancy.
Reid wrote: “A 2012 resolution drawn up by Healey, Deshaies, Gagliardi & Woelfel, PC states,
‘the Foundation resolves to create an account at a local banking institution, to wit: The Provident
Bank, in the name of the Foundation d/b/a The Newburyport Parks Conservancy with a Trustee,
James Agrippa Morrill and John Grady as signatories’.”
The long-time parks employee admitted, “It is confusing, but not illegal that the checks used by
the Conservancy list the umbrella foundation as the account holder rather than the Newburyport
Parks Conservancy. This is why the refund check issued by the Newburyport Parks Conservancy
to Ann Marie Monzione appears to be from an entity that is separate from the Conservancy,
when in actuality was issued from the Conservancy bank account.”
Jack Grady, the financial advisor to the Morrill Foundation, sent a copy of the 2012 certificate to
the council.
The problem, as pointed out by councilor Jim McCauley, is that the DBA certificate was never
accepted by the city clerk, as required, and it expired in 2016.
​“So, it’s been invalid since then,” McCauley wrote in an email.
In a four-paragraph email to all city councilors, foundation president Robert Morrill wrote: “
The pConservancy was designed to be a separate entity from The Mayor Gayden W. Morrill
Charitable Foundation. The foundation paid for it to be established with the only connection
being to ensure that all independent donations would be tax free. In addition, the Foundation
would pay any administrative costs so 100 percent of the specified donation would be spent as
directed.”
Morrill has hired Lisa Mead, a leading attorney and former mayor who established the Parks
Commission in 1996, to represent the foundation.
He closed the email to the council, writing, “The City benefits, the residents’ wishes are met, and
the Conservancy is the conduit. The City Council receives no money and with no passing
through the City no City councilor involvement takes place.”
The foundation has also asserted that it is a private organization and should not be subject to a
city audit. But council members disagreed, saying once the foundation took public money, it
could no longer hide behind its claims of being a private foundation.
The foundation, named for the city’s 47th mayor, has been a leading supporter of improvements
to the city’s 26 parks.
Zeid and McCauley have asked Reardon to conduct a forensic audit into the donated funds to the
conservancy and deposited in the foundation accounts.
Reardon has agreed to conduct a standard audit of the financial records for the conservancy and
foundation, instead of a forensic audit, which is usually done when laws may have been violated.
Regarding the bench donation that prompted the probe, Reid wrote that Monzione initially sent a
check for $1,000 in early 2022 to adopt an existing bench along the waterfront at Joppa Park.
But the city did not have a bench available. Monzione was told in March that the Conservancy
could either refund her money or she could pay for one of the granite block seats along Clipper
City Rail Trail at Coombs Wharf for $3,000, Reid wrote.
She agreed to the larger donation and sent another $2,000 check. In late 2021, the Parks
Commission had approved the granite blocks as seating along the waterfront side of Clipper City
Rail Trail in the Coombs Wharf area.
Reid said it was a long process to acquire the granite blocks and took months to find a granite
engraver. Monzione grew frustrated and set Oct. 1 as the deadline, or she wanted her money
back. In September, Parks Commissioner Paul Swindlehurst stopped the engraver who was
working on the bench because the work had not been approved by the commission.
Since the bench was not completed by the deadline, Reid wrote that she asked Grady to issue a
refund.