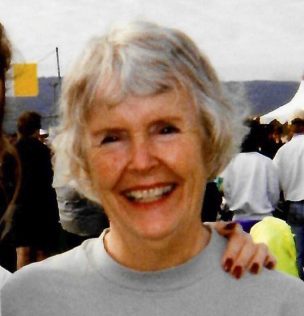 Known to many as “Fitzie”, Helen was born January 16, 1938, to Mary and Christopher Fitzpatrick. “Fitzie” passed away peacefully at Avita of Newburyport, Massachusetts on September 18, 2022.

It was an honor for her four grateful daughters to be with her as she began her new journey.“Fitzie” was one of five siblings. She grew up in Franklin, Massachusetts where she attended Dean Jr. College. She then ventured into Boston where she was an accountant and lived on Tremont Street. She was always up for an adventure whether it be out to the Berkshires, down to The Cape or heading up to the White Mountains. It was on one of these adventures north, on the Boston & Maine Train, to enjoy some skiing that she met her best friend and soulmate, Hap Winslow. They met “Après~Ski” at Tuckerman’s Inn in North Conway, New Hampshire. The two would enjoy skiing and the “Après” tradition for over fifty years, eventually passing it onto their family. Together “Fitzie” and Hap, Mum and Dad, accrued many beloved traditions and memories raising their family. They enjoyed countless fun moments with their children, son-in-laws, daughter-in-law, grandchildren, nephews, nieces, and friends. “Fitzie” felt most comfortable observing from the back and sharing her quick wit, one-liners and puns that prompted many laughs. She held a special passion for running, tennis and reading. Her humble joy for these hobbies was passed onto a wealth of people. Whether it be “The Wednesday Girls” with whom she played tennis, “The Running Buddies” she ran countless road races with, or the friends and family who enjoyed Coffee/ Tea Time with her at “58”; we all cherished our time with her. She had a magical smile and kindness that made those around her feel connected. Later in life, “Fitzie” worked as a Certified Nursing Assistant at Seaview Retreat in Rowley. Here, she exemplified her gifts for service and compassion to others. Her down to earth personality created a sense of family for residents, staff, and loved ones. Her appreciation for each individual, created an abundance of friendships that spanned generations. Helen/”Fitzie” is survived by her four daughters and spouses: Kathleen Winslow and Erik Prussman of Rowley MA; AnnMarie and Nate Keliher of South Hampton, NH; Marty and John Blanchard of Rowley MA; Elizabeth and Mark Smith of Skagway AK; Daughter-in-law Kate Collins-Winslow of Merrimac, MA; and grandchildren: Kyla Prussman, Jaden, Camden, and Griffin Keliher, Athena and Addison Smith, Joseph and Julia Winslow, sister-in-law June Fitzpatrick, and brother-in-law Ted Hoegler. She will be remembered and missed by many nieces and nephews. She was predeceased by her husband, Hap/Ralph Winslow, son David Winslow; sisters, Arlene Hoegler, Anne Balog; brothers; Bernard and Jimmy Fitzpatrick. The family wishes to express extreme gratitude to Avita Staff of Newburyport for treating our Mum like family. Words cannot express the comfort and peace their daily care and love brought. Thank you also to Compassus Hospice and Palliative Care in her final days. Their guidance during this time was a gift. We are blessed by the out-pouring of support and love for our mother and family during this time. It has served as a reminder for the constant love and support she provided to others throughout her life.

A Mass of Christian Burial was held on September 22, 2022, at St. Mary Parish. Interment was at Rowley Burial Ground. Arrangements were entrusted to F. S. Roberts & Son Funeral Home of Rowley.