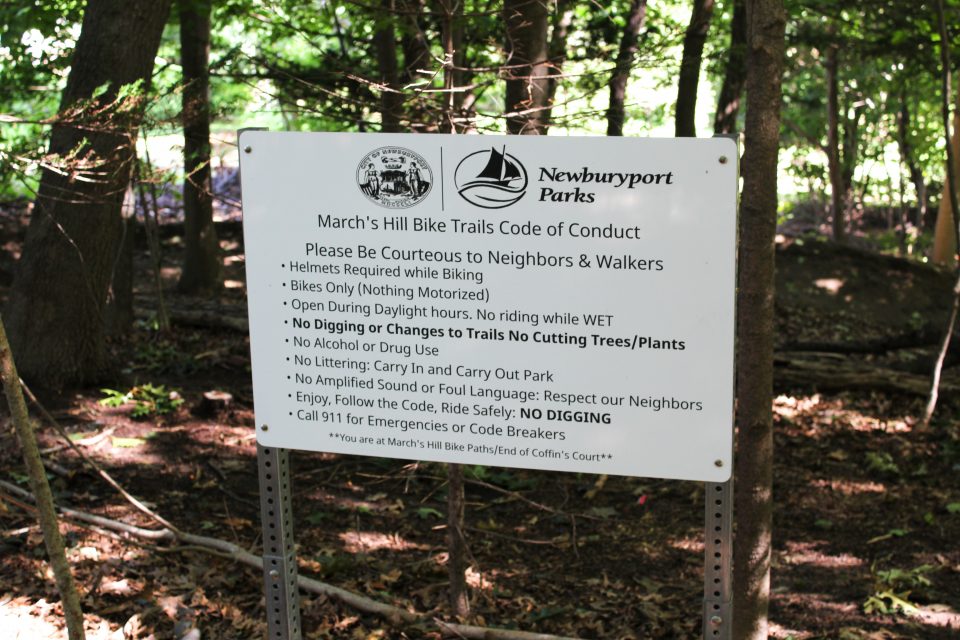 NEWBURYPORT — The “Be Courteous” signs the parks department installed at March’s Hill are back up.

When first put up, one sign, advising the young bicyclists that they were not to dig holes and cut trails through the woods at this city-owned park, was pulled out of the ground and tossed several feet away.

Park Manager Mike Hennessey said the signs were put back up, but this time the metal signs on metal posts were anchored in cement.

In the popular 17-acre park in the south end of Newburyport, young bikers have built make-shift wooden and dirt ramps for jumps. They expanded existing trails for bike riding and cut down trees to make the trails better for bike riding.

The result was that hikers through the hilly, wooded area near a water tower could not use the paths. The bikers, riding fast and jumping ramps, made it too dangerous.

The Parks Commission voted at its August meeting to create a series of rules for the dozens of young bikers and post them on large metal signs.

“It’s very important that there is a public list of expected behaviors there so I think some type of signage has been a long time coming, actually,” Parks Commission Chair Ted Boretti said at the meeting.

Those signs were ripped down. There is no proof who tore down those signs or the new metal one.

The Parks Commission has no power to enforce the rules. The police have that responsibility, so the sign advises: “Call 911 for Emergencies or Code Breakers.”

The commission also voted to put up ropes to limit the area where the bikers may ride. As of last week, the ropes had not been put up.

Placed near the makeshift jumps and at the main entrance to the wooded area, the signs twice listed the rule that prohibits digging holes. In bold lettering, it reads: “No Digging or Changes to Trails. No Cutting Trees/Plants.” It also implores the riders to “Enjoy, Follow the Code, Ride Safely, No Digging.”

The sign addresses other concerns of Coffin Court neighbors and walkers. It bans littering, specifying that this park is a “Carry In & Carry Out Park.” Empty drink cans and bottles that were left near the jumps have been removed.

The rules also ban amplified sound. The neighbors complained to the Parks Commission that the bikers, particularly teenage bikers, played loud music while they rode and worked.

Parks officials and neighbors have been concerned that the bikers, navigating the trails and making the jumps, would be injured. So, the first rule on the sign is that the bikers must wear helmets.

Bike riding after dark and on muddy trails is also prohibited, as is motor bikes. The neighbors said older teenagers and young adults played music in the woods after dark.

The rules ban any alcohol or drug use, although the litter seen earlier did not include beer cans or alcohol bottles.

Boretti earlier this summer proposed that the city create an accurate, current map of the bike trails in the west section of the park. And he wanted the city to hire a safety expert to determine if the jumps, some of which are high, are safe for the bikers to ride.