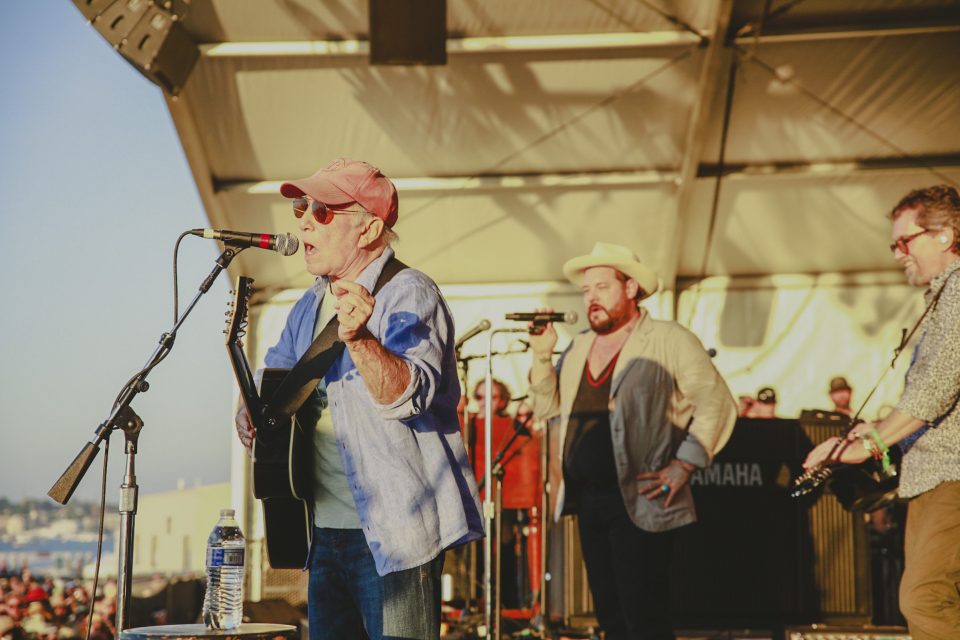 NEWPORT, RI – The unexpected and unbelievable always seem to occur at the iconic Newport Folk Festival, which was founded by Lynn native George Wein and singer/activist Pete Seeger in 1959.

But none of those surprises surpass the miracles that occurred at this year’s fest, held Friday through Sunday at Fort Adams State Park: unforeseen appearances by Joni Mitchell and Paul Simon. Mr. Wein was likely digging it from his front-row seat in heaven. He passed away in September at age 95.

Mitchell’s participation was the most shocking. She suffered a brain aneurysm in 2015 and this was her first full-length concert in nearly 22 years. Judy Collins brought then-unknown Mitchell to Newport in 1969 but she had not been back. That changed thanks to superstar Brandi Carlile and Jay Sweet, the Essex resident who is executive producer/director of Newport Folk & Jazz Festivals Foundation.

“Jay dreamed really, really big for this,” said Carlile. “We’re here to keep the power of the collective alive.”

Mitchell was an active participant throughout the festival-closing set, dubbed “The Joni Jam.” She and Carlile sat side-by-side center stage in regal gold chairs, and the 78-year-old clearly enjoyed herself throughout. She even stood and played, solo, an electric guitar, proving nothing can keep her down.

Wynonna Judd, Marcus Mumford, the ladies of Lucius, the twins from Carlile’s band, and others were seated in a re-creation of Mitchell’s living room, joining the Woman of Honor in the celebration. A playful “Carey” and “Big Yellow Taxi”, a gorgeous “Both Sides Now” and a poignant “The Circle Game” all drew ear-splitting ovations. Mitchell sat and smiled widely as Celisse Henderson delivered a jazzy “Help Me” and Carlile and Taylor Goldsmith (Dawes) sang “Come in From the Cold.” 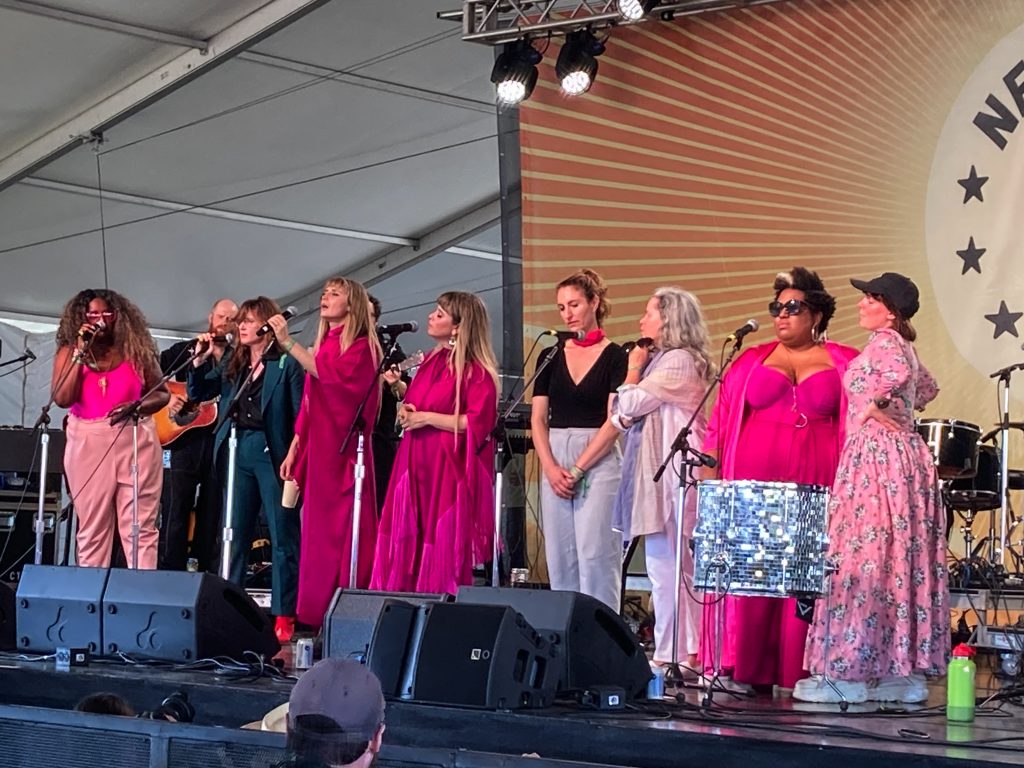 But it was “A Case of You,” the “Blue” classic about her broken romance with Graham Nash, that really connected.

Mitchell, unaccompanied, her voice huskier now, sang “Oh, but you are in my blood/You’re my holy wine/You’re so bitter, bitter and so sweet

Everyone on stage was crying. Everyone in the audience was crying. I’m tearing up just thinking about it. An emotional, unforgettable moment to be sure.

Nathaniel Rateliff, his band the Night Sweats, and guests (including Natalie Merchant, who joined many performers on stage throughout the weekend) had the crowd up and dancing to “Mother and Child Reunion,” “Kodachrome” and “Me and Julio Down By the Schoolyard.” 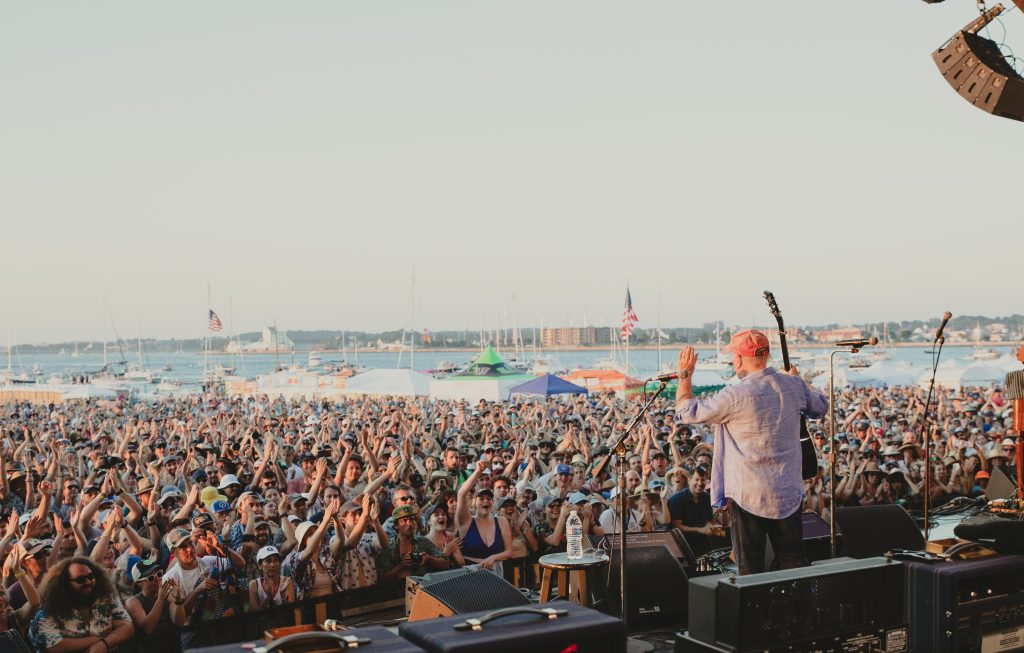 There were also many challenges, mostly due to uninvited guest COVID-19 which for the third consecutive year forced Jay Sweet and his team to scramble for replacements and rearrange daily schedules.

One such substitute was cleverly named “Clusterfolk,” a seemingly on-the-fly collection of performers singing a bit of this and a bit of that.

“The harsh reality is it (COVID-19) didn’t go away, and we’re trying to do the best to get through it,” said Sweet. “I’ve been running around, talking to artists. Every single performer who walks up here (during Clusterfolk) is not being paid. So, if they mess up a song, please clap louder.”

Truth is, this was one of the fest’s most-fun sets. Anais Mitchell performed Don Henley’s “End of the Innocence.” Merchant arrived on stage to a thunderous ovation, and joked “She lives, she breathes, but can she still sing.” Yes, she can still sing, which she proved during “Carnival” and “Kind & Generous.” Lucus Nelson and Robert Ellis combined on Neil Young’s “Tell Me Why.” Sarah Lee Guthrie and Johanna Samuels both performed an original song. Craig Finn (The Hold Steady), aided by members of Goose, Merchant, Anais Mitchell and many others had a blast with Nick Lowe’s “(What’s So Funny ‘Bout) Peace, Love and Understanding.” 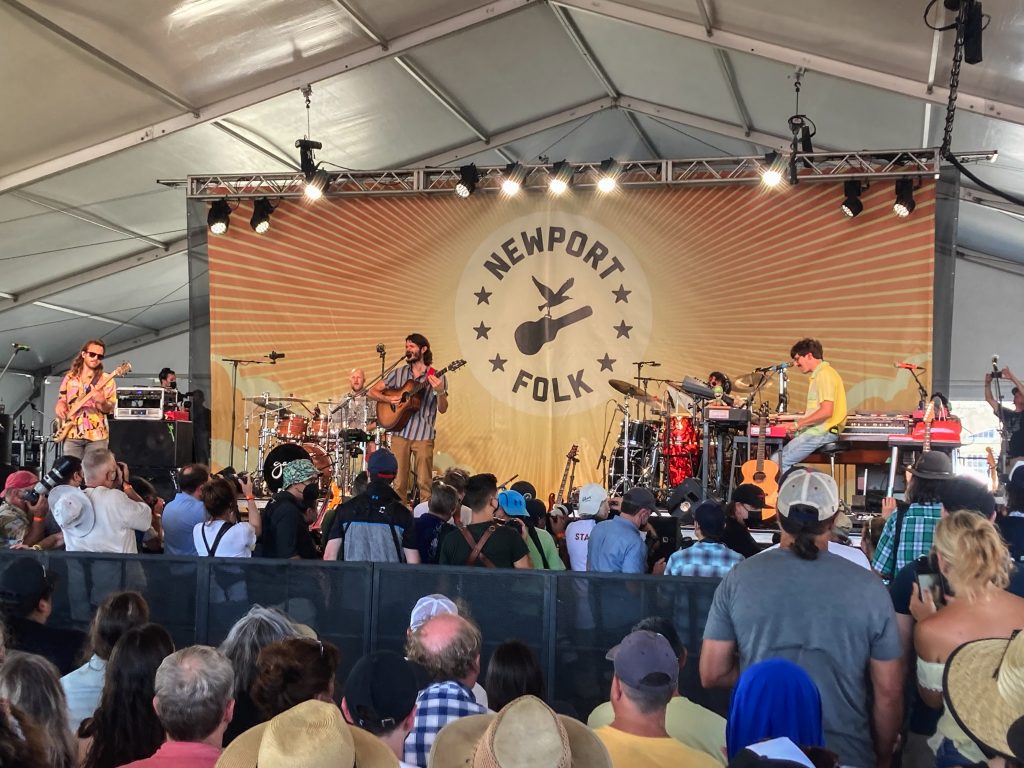 Sweet said he was chatting by phone with Hurray For the Riff Raff’s Alynda Segarra. “She asked me how I was doing. I said ‘It’s the hardest year yet. I’m losing my mind and artists are canceling (every day).’ She said ‘Do you want me to come up and play.’” She came up and played. Such is the mutual respect Sweet has for performers and them for him and the Newport community feel that was created by Wein and continued during Sweet’s leadership.

It was brutally hot (90+ degrees) every day. The lines were longer for the water refill stations than the porta-potties.

Here are a few more of my favorite moments from Newport 2022:

The day appropriately started with “Love Will Find a Way,” a gospel revue that got the early arrivals dancing and clapping to “If I Had a Hammer” and Odetta’s “This Little Light of Mine.“ Lena Mae Perry, 83 years young, a red-hot band and guests Merchant and Lucius created a joyful noise.

Valerie June who displayed personality plus, smiled through numerous sound issues (non-working mics, crackles and pops) and delivered a fun uptempo set that won her many fans. Her band included three horn players and the four-piece Berklee strings; sadly the audience couldn’t hear them.

Taylor Goldsmith (Dawes singer-guitarist) subbed for his pregnant wife (Mandy Moore, resting on doctor’s orders) was fabulously clever and fun. “Most band members in my situation play with friends. Not me. I play with total strangers.” He recruited drummers, bass players and guitarists from the audience for three separate songs, gave them a quick tutorial … and all worked out well. Oh yeah, he did invite three members of Goose to join in. And 10 kids from a Newtown children’s chorus assisted in a cover of Moore’s “Save a Little For Yourself.”

Boston’s Ballroom Thieves opened the fest on the main waterfront stage and they absolutely killed it. Calin Peters and Martin Earley have great chemistry, and their bandmates were always smiling and having a blast, even when they’re playing a peppy song about depression. They’ve nailed the big-rock-star choreography too! Destined for greatness.

Arny Magret of Iceland performed her first gig in the United States, and received enthusiastic support from the audience. She seemed genuinely surprised by the welcoming reception to her acoustic rootsy folk songs. “Actually, this is my first time in the United States,” she laughed.

Madi Diaz blended strong songs, an engaging personality and strong chops. She was joined by Courtney Marie Andrews and S.G. Goodman on Patty Griffin’s “Be Careful,” a gem of a song. One of my favorite sets at Newport 2022.

Lucy Dacas, in her fourth visit to Newport in the last six years, just keeps getting better. She’s a heck of a songwriter, singer and performer. It was wonderful to see her on the big stage.

Neal Francis plays piano like Elton and brings a fresh sound to his ‘70s-flavored rock songs. An overflow crowd gathered at the smallish Harbor Stage and seemed to approve.

Lee Childs – “The soul of soul singers” – and his big band wowed with a James Brown-like set of songs of faith.

The Felice Brothers were sublime, pairing well-written songs filled with cultural references and rocking beats. The accordion-driven “Whiskey in my Whiskey” was a hoot and a glorious rowdy singalong. 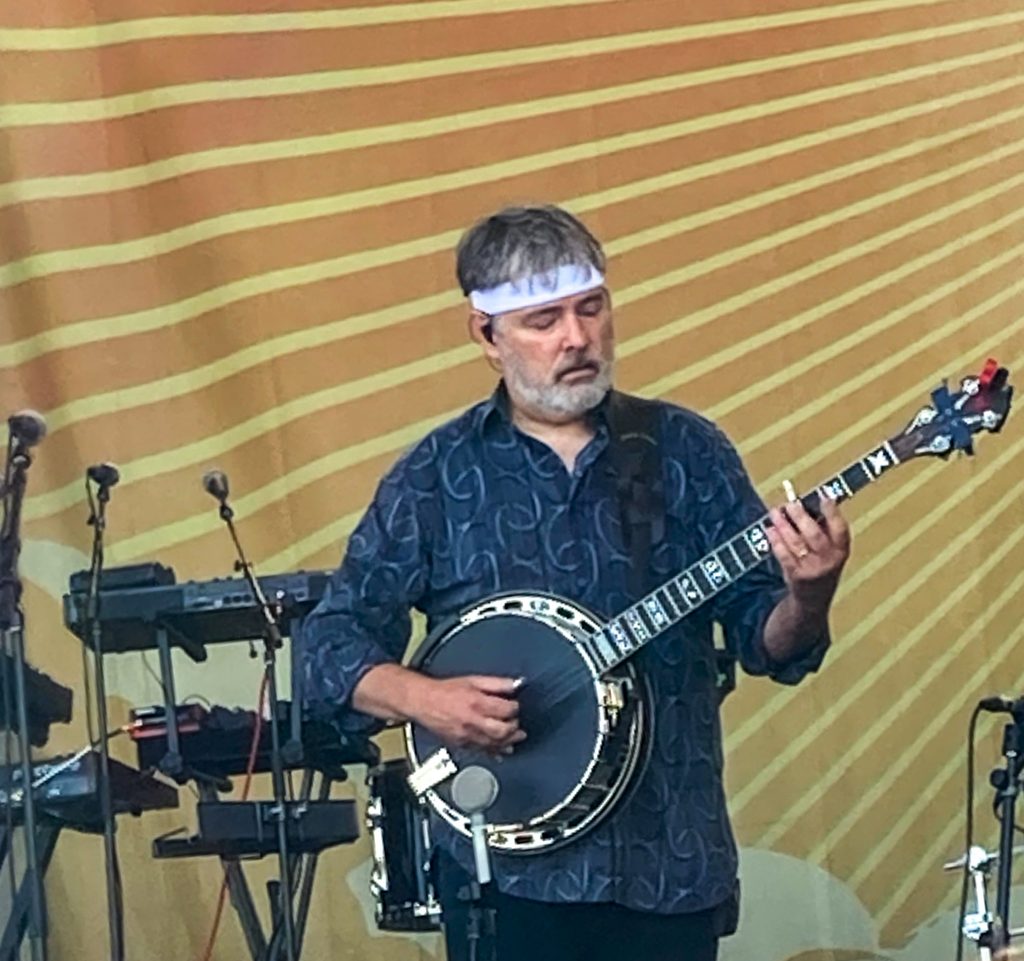 Bela Fleck, joined by Sam Bush, Jerry Douglas and five other all-stars on fiddle, banjo, mandolin, wowed with a fast-paced bluegrass set that was totally unplugged and totally wonderful.

Dinosaur Jr’s J Mascis probably set a record for the most-ever amps on a Newport stage. Folk music and Dinosaur Jr are seldom mentioned in the same sentence, but it worked. Courtney Barnett joined for a song, and the band finished with a burst of furious punk.

Goose is the band of the moment and it’s easy to see why. The jam band has graced the cover of numerous music magazines, but hype be damned. These guys can improvise and play with the best of them. Excellent!