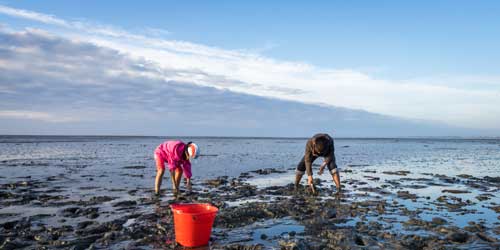 REGIONAL – Forget sitting down to a bowl of fresh local clams for a few weeks. Thanks to the drought, the red tide harmful algal blooms have closed all North Shore beds to clamming.

Gloucester, Newburyport, Essex, Ipswich, Newbury, Rockport, Rowley and Salisbury were notified that as of June 16 that “the Massachusetts Division of Marine Fisheries has closed all bivalve shellfish and carnivorous snails in shellfish growing areas N1 through N14.”

In addition, other North Shore communities, including Beverly, Danvers, Manchester-by-the-Sea, Marblehead, Peabody, Revere, Salem and Swampscott, were notified as of June 23 that areas were closed indefinitely to the harvesting of blue mussels due to red tide.

“We are in a full closure of all of the North Shore of Massachusetts,” Gloucester Shellfish Warden Peter Seminara wrote on Facebook.

The unavailability of local shellfish is disappointing for diners, but is financially devastating for clam diggers unable to earn their summer living.

Red tides are colonies of microscopic algae that grow out of control, produce toxins that kill fish, make shellfish dangerous to eat or make the air difficult to breathe. They often turn the water red, according to the website of NOAA’s National Ocean Service.

The toxins produced by red tides accumulate in shellfish. When consumed, they can cause paralytic shellfish poisoning in people.

Symptoms include tingling and numbness of the lips, tongue and extremities; drowsiness; giddiness; unsteadiness, vomiting and diarrhea. In extreme cases, it can cause respiratory arrest and possibly death.

But don’t worry about the shellfish. The toxin does not harm it. When the bloom goes away, the shellfish rids itself of the harmful toxin.

When biotoxin levels exceed 80 micrograms per 100 grams of shellfish meat, affected areas are closed to shell fishing and sampling continues, according to the state Division of Marine Fisheries’ website. Once three consecutive samples are below 80 micrograms, the area reopens, the state says.

Experts with the Ipswich River Watershed Association said drought conditions in Massachusetts and upstream water use are limiting the flow of freshwater reaching the town of Ipswich, where it would normally help push the blooms out to sea.

“The water levels in our rivers are so low,” said Erin Bonney Casey, of the watershed association. “That’s going to impact everything downstream from here including the clam flats.”

“It’s a natural occurrence, it happens. We’ve just got to hope for the best,” Damon said. “That’s all you can do, when the state says you can’t dig, you’re not going to fight the state.”

Long-time restaurateurs like Woodman’s of Essex, which has been serving the battered and fried clams for more than 100 years, have learned to weather the red tide.

Maureen Woodman, the restaurant’s director of catering sales, said, “Woodman’s has constantly been preparing the clam supply whether it be a rain closure or red tide” to ensure its supply for the summer season. Other clam suppliers on the Eastern Seaboard “help us tremendously.”