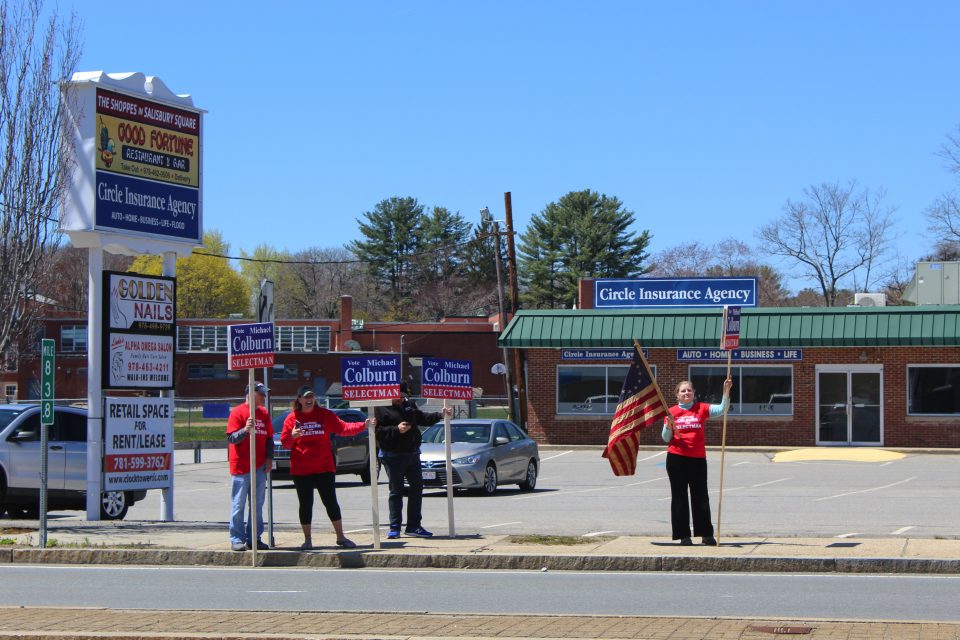 SALISBURY — Three candidates, including two who have served several terms, are vying for two seats on the town’s Board of Selectmen.

Freeman Condon, former owner of the Beach Plum Farms, is seeking his fourth three-year term. Ronalee Ray-Parrott, a social worker, is running for her third term as a selectman.

Salisbury Lions Club president Michael Colburn, who owns a property maintenance business, is also running for the highest office in town for the first time.

Only two of the three candidates can be elected.

Condon said he is running for reelection because, “I feel the town can benefit from my experience and acquired knowledge of municipal government and finance. There are current projects nearing completion that I have supported and would like to see finished.”

Raised in a family that he said was expected to do public service, Condon served on the library building and police station building committees. He has been involved in some of the town’s biggest issues, including the decision not to approve a slots parlor.

“I want to keep Salisbury moving forward and continue the progress we have made in our community,” Condon said.

Ray-Parrott said she wants to serve another term on the board because, “I love being a Selectman in Salisbury.”

With a master’s degree in social work from the University of South Carolina, Ray-Parrott is a school social worker the Northshore Education Consortium.

In addition to being on the Select Board, she serves on the parks and recreation commission and is the chair of the Affordable Housing Trust.

A native of Salisbury, she said she believes she has helped move “this amazing town” forward.

Like Condon, she said she has worked hard on several projects and wants to see them finished. She listed as her were building another affordable housing project, improving parks and recreation and identifying another option for our Triton alternative assessment.

Her biggest fear is that Salisbury will become too expensive for future generations to own homes there. She also deplored the condition of the town’s roads and said it needs a plan to improve all roads.

Colburn, who owns 5 Elements Property Maintenance, said he decided to run for selectmen because many residents have asked him to.

“I have an uncanny ability to get people involved,” he told an election forum last month. “It’s one of my specialties, I engage, engage, engage and I do it with kindness. The one thing that I would do best is engage the people.”

In addition to heading the Lions Club where he and other members were among the first to help those displaced by the beach fire, Colburn serves on the town’s Charter Review Committee, the Conservation Commission and with Ray-Parrott as the vice chair of the Parks and Recreation Commission. He is also the vice president of the Salisbury Baseball, Softball League.

A resident of Salisbury for 30 years, Colburn said his family dates to the founding of the town. “I wake up every day with that fire, leading the next generation of leaders is my goal, bringing new people into our boards and commissions to help all voices be heard,” he wrote in a candidate’s questionnaire.

His biggest concern for the town was its loss of green space. “Large dense multi-unit developments in historically residential areas of town not only burden our resources, but also create a less desirable town to live in,” he wrote.

Colburn said his biggest fear is that Salisbury’s growth will eradicate the town’s history. He is also concerned that Salisbury will turn into a city.

“That’s not where we should stop, it never meets the needs of, not only of affordable housing, but for the people who need to be able to age and stay in Salisbury and afford that,” she said.

Condon said he would like to have the town negotiate with real estate developers in the early stages of permitting to include more affordable housing.

As the father of identical twins, Colburn said he believes that the town should weigh in on the matter once it hits the 10 percent goal.

Condon has been the target of criticism he and his wife, Maureen, have agreed to sell 28 acres he owns at 6 Forest Rd. to developer Steve Paquette for 56-unit condominium complex. He said he and his family have been attacked with misleading statements about his role in the project.

The plan is approved by the town, but now faces an appeal in Essex County Superior Court.

Condon said they have owned the land as an investment for 35 years and has had no role in the decision by the Zoning Board of Appeals to approve the project.

Ray-Parrott and Colburn agreed that selectmen played no role in the Forest Road project, although she is opposed to the project. Colburn said there was no conflict of interest, but he understands how residents could be confused.

Voters will also have to choose a new town moderator, who presides over the Town Meeting, and for Salisbury’s seat on the Triton Regional School Committee.