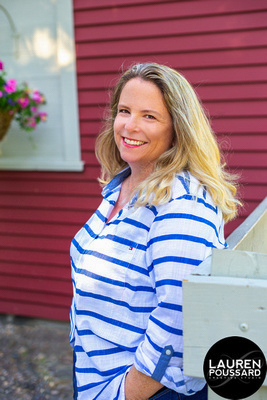 It was a literary debut 25 years in the making for North Shore author Sue Thomson, who published her first novel, “Trevor,” on March 21.

Thomson, who writes as S. Hilbre Thomson, and is a sixth grade teacher in Middleton, grew up in Topsfield and makes the most of the North Shore locations she knows and loves in the suspense tale.

“I started writing this before I got married, before I had three kids, and before I was a teacher,” said Thomson.

Thomson said she spent ten years as a stay-at-home mom and never had the time to really dive back into the story.

But fostered by a love of reading instilled in her by her mother, Thomson didn’t give up on her dream of writing a book, and came back to the story in bits and pieces over the years.

The turning point to hunker down and make it from Chapter One to The End came a few years ago with a lot of encouragement from Thomson’s husband, North Shore public relations maven Dave Thomson.

“We were walking in New York, and I was narrating what was going on around us, and Dave said, ‘What are you doing? You need to write this down,’” Thomson said.

They talked about finishing the book Thomson had started years ago, and Thomson said she also wanted to keep the promise she had made to her mother before she died that she would finish her book.

As Thomson dove back into the story, she found that as she spent more time with the characters, they had evolved from the time she began piecing the mystery together.

“They slowly evolved over the years as I’ve met new and different people,” Thomson said. “I was also able to see life more through the eyes of a parent, and saw relationships in the novel that were more important and that I wanted to highlight.”

“Trevor” begins with Matt Stone, a man Unable to escape his past who heads North leaving behind the memory of his dead wife and son. His journey takes a turn when he comes across his late son’s doppelgänger, Trevor Reed.

Blinded by the resemblance, Matt becomes obsessed and begins stalking him. Little does Trevor know, he becomes wrapped up in Matt’s delusions. Concerned, Trevor’s mom, Jesse, enlists the help of the local authorities to keep him safe. Despite the involvement of police and eventually the inclusion of the FBI and an enthusiastic reporter, Trevor disappears. The Reeds will do anything to get their son back which results in a chase starting in the suburbs of Boston to an island on Lake Winnipesaukee in New Hampshire.

In addition to strengthening the motivations of the characters, there were also some other changes Thomson had to account for over the course of nearly a quarter of a century.

“There were so many things with the terminology,” Thomson said. “Before everyone was used to smartphones, I referred to them as ‘cellular devices.’ There were those kinds of little technological things that were different.”

Thomson said she has always read as an escape, especially in the mystery and suspense genre that “Trevor” falls into. The biggest challenge moving from reader to writer, she said, was undergoing an extensive editing process to make sure the manuscript was ship-shape for publication.

“The editing process wasn’t really a surprise, but I had no knowledge of just how many edits it would go through,” she said.

Thomson credited her teaching experience with helping lay some of that groundwork to keep the structure of the novel tight. And while Thomson said she still enjoys reading for pleasure, there are also times when she can pick up a novel to get some writing pointers and dig beneath the hood to examine the craft and effort that went into it.

Currently, Thomson said she is looking at opportunities to promote “Trevor,” and is mapping out a second potential novel where some of the characters from her debut novel continue to unwrap the mysteries before them.

“Trevor” is available for sale on Amazon and Barnes and Noble’s website, and is also available directly from Thomson’s website at www.shilbrethomson.com.