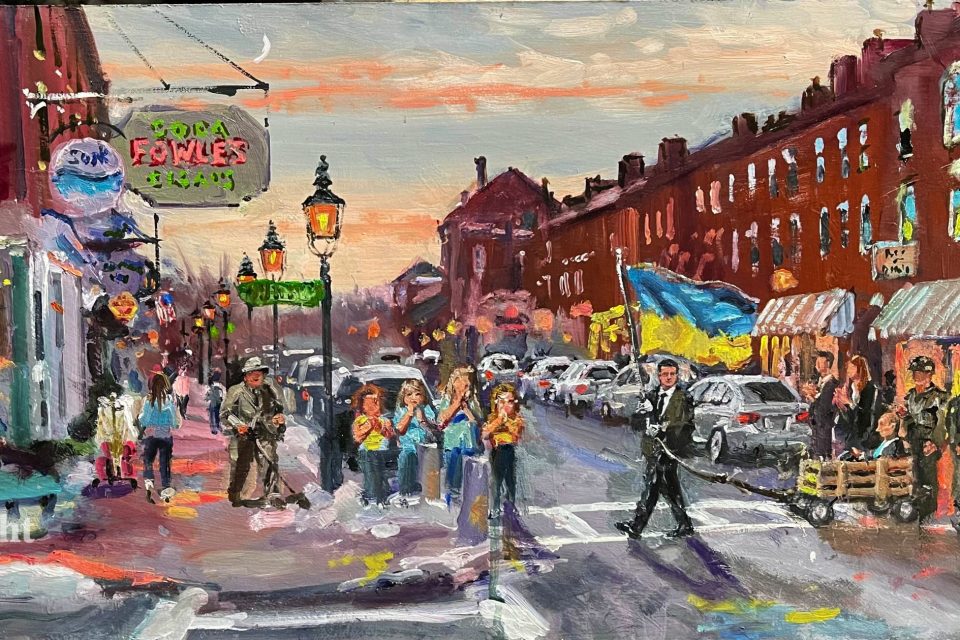 REGIONAL — The war in Ukraine is closer than it may seem.

Dylan Collins, who grew up in West Newbury, is a news correspondent for the Agence France Presse, covering the war in Kviv.

Jarrod and Nadiia Sadowski, who live on Plum Island, continue to raise money to buy food and medicine that is being delivered by a team of volunteers in her hometown of Nova Kahovka. The city of more than 40,000 people in Southern Ukraine has been overrun by Russian troops.

And in a statement against the war, local artist Richard Burke Jones painted Ukrainian President Volodymyr Zelenskyy waving the Ukrainian flag at the downtown Newburyport intersection of State and Pleasant streets.

The Nova Kahovka For Life Campaign

“Earlier this week, we processed another $8,000 transfer to Ukraine for a larger purchase of food and medicines,” Jarrod Sadowski wrote to supporters last week. “To date we have purchased about $31,000 in food, medicines and essentials and (are) delivering as we go.”

In addition to food and medicine, which is being delivered by two volunteers, using three cars, the funds raised by the Sadowskis are now packaging our delivery bags to last the recipients for 10 days. That saves on gasoline and increases the number of people the volunteers can reach per week.

They also expanded the list of essential items being delivered to include radios, candles, flashlights and power banks to keep people who have no power.

Dan Healy, founder of ARC Technologies in Amesbury, has offered to match up to $100,000 in donations to the Sadowskis’ fundraising efforts in the Nova Kahovka for Life. Every dollar is being used to buy and distribute food and essentials to the people of Nova Kahovka.

The Sadowski have been supporting friends and family members in Nova Kahovka since the war began Feb. 24, when her town and surrounding towns were occupied by the Russian military, Jarrod wrote. “They have been bombing surrounding towns and parts of her town. Some people have fled to other villages, but most have nowhere to go, and they are all running out of money to purchase food and medicine.”

More than 1,000 Ukrainians to date have received food and essentials from the Sadowskis’ efforts, Jarrod wrote.

At the end of last week, he wrote: “The last four days since our March 20th update have certainly had their ups and downs. Our volunteers are continually getting stopped by Russian Military check points throughout the city, asking questions and reviewing cellphone photos and messages for information that may point to organized protesting or other information. Thankfully, this is only a small interruption for our volunteers.”

Russian soldiers in an armored truck threatened one of the suppliers they have been buying food from. The supplier closed for several days, but the volunteers had built partnerships with other food warehouses. The food deliveries continued, Jarrod wrote.

Of his oil painting Burke wrote, “Winston Churchill walks down State Street as a symbol of defiance in difficult times. Young girls applaud the Ukrainian effort to survive. Some GIs stand on the right – because it feels like 1944 all over again!”

Collins lived in Beirut for a decade, reporting on the Syrian civil war. He was cut by flying glass in the massive Beirut dock explosion on Aug. 4, 2020.

“I stand in awe of Dylan Collins, the quiet blond kid I coached in soccer turned war correspondent. Dylan, now in his mid-thirties, has been staying in Kyiv, and posted over the weekend from the suburb of Irpin where American journalist Brent Renaud was shot and killed,” Dodge wrote.

Posting on social media, Collins has traveled between the war-torn cities of Kviv and Karkiv in the northeastern part of Ukraine.

His mother, Caroline Collins, who lives in Vermont, told Dodge she understands why her son is in Ukraine. “He loves what he does.”

“I spoke with him on Sunday, thankfully, and he was his customary calm and focused self,” Caroline wrote. “He was very close to the incident in Irpin and shot some footage, but continues to feel that he was in more active danger when he was in Gaza than he is now. Not sure that I agree from where I sit, but I respect how it feels on the ground.”

In Ukraine, Collins had electricity, hot water, heat and easy access to food, none of which was true when he lived in Beirut, his mother wrote.

His news agency is rotating journalists in and out of Ukraine through Lviv, but Collins has been reluctant to leave. He has combat preparedness training, which other journalists do not. He has stayed near the fighting to help orient the incoming journalists.

“This is what he trains for, and I believe his eyes and heart are where they need to be,” his mother wrote.

To donate to the Nova Kahovka for Life campaign, visit https://novakahovka.life/donate-now/.

You can follow Dylan Collins as he reports from Ukraine at www.collinsofdyl.com. Or follow John Dodge’s reports at https://dodgeretort.com/media/dylancollins.