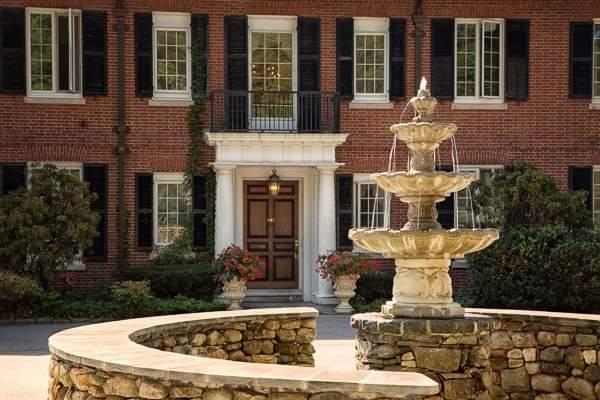 ROWLEY –Sea View Retreat, the stately brick building that was home to thousands of elderly residents for almost 70 years, is being reinvented as a social club and wedding venue, maybe a restaurant and Airbnb.

After months of wrangling with the Commonwealth over Covid-19 procedures and enforcement, Stephen Comley Jr. closed the facility he has headed for 30 years.

During the dispute with the state Department of Health (DPH) in recent months, he escorted out of the building several state officials, employees and contractors, including the acting DPH director Stephen Davis. Assistant Atty. Gen. Maryanne Reynolds left the facility voluntarily saying she was “uncomfortable” being there.

In a four-page explanation of recent events at Sea View, Comley wrote, “On September 1st, 2021, Sea View administration along with its loyal, dedicated and exhausted staff made a very emotionally painful decision to close its doors and relocate all of its residents to other facilities for the safety and well being of not only those residents but its employees.”

Shortly before Christmas, the last resident was transferred. “It was a very sad, painful and angry last week for all involved, watching the people that we loved and cared for so long leave their home and face an unknown future elsewhere. Some we would never see again,” Comley wrote.

Since then, the 44,000 square-foot building at 50 Mansion Dr. has been largely empty.

“I have to find a new use for the building or sell it,” Comley said last week. “I’m working hard not to sell it.”

The social club, open for two months, already has 35 members, most of whom pay $100 a month. “They are paying the heating bill, which is considerable,” Comley said.

It has not been decided what the membership fees will be in the future, Comley said. Like other private clubs, the annual fees could be in the thousands.

He and the members are also considering installing a restaurant in the building. And they may lease out the private bedrooms, many of which have private fireplaces.

For weddings, Comley said he would use the dining room, drawing room and sunroom. The grounds outside would be a beautiful setting for wedding photos.

The building on 300 acres was built originally in the early 1900s as a grand summer “cottage” for Bostonians seeking to enjoy the Atlantic Ocean breezes as an escape from the city’s summer heat. Guests then and now can enjoy the building’s grandeur with brass chandeliers, arched hallways, ornate grandfather clocks and fireplaces.

It was the setting for the 1946 World War II spy film, 13 Rue Madeleine, starring James Cagney, and later a short film, House of Usher.

In 1954, Rubylyn and Winthrop Comley turned the mansion on the hill into a home for the elderly. Over the decades, Sea View Retreat has cared for more than 3,000 people.

“In March of 2020 before Covid reared its ugly head, Sea View employed over 100 employees. Within six months, staffing dropped to 50 employees and the facility could no longer accept any new clients and still maintain the quality of care, and, as a result, a self-imposed freeze was required,” Comley wrote.

To fight Covid, the state imposed new regulations on the nursing home industry, which included required social distancing and staff working from home. Comley said those regulations, which the staff followed, “simply were not workable.”

Sea View had no Covid outbreaks until the DPH sent in contracted workers as part of a Rapid Response Team, Comley said.

The team was composed of “uneducated individuals,” who were going from one facility to another, Comley said. They came in Sea View “without following testing guidelines and Covid protocol, ignoring DPH regulations.”

He said in an interview, “It did not help. Everything went awry.” Comley blamed the Rapid Response Team for Sea View’s first outbreak of Covid, which soon spread to 14 cases.

And the state levied thousands of dollars in fines on Sea View, which Conley called “outrageous.”

Comley and the staff escorted the state team out of the building and informed DPH of its reasons and concerns.

“Within one week of terminating the Rapid Response Team involvement, Sea View staff were able to treat the remaining infected patients and bring the cases under control,” he wrote.

The facility remained Covid free for more than 10 months during the worst of the Pandemic, he wrote.

Despite concerns about the vaccines, Sea View administration offered to vaccinate its staff that chose to take it.

“The turning point came in August of 2021, the Commonwealth mandated that all healthcare workers be vaccinated by October 1st,” he wrote. “Our heroes were not being stripped of their right to choose their medical path and what goes into their bodies after risking their health over the last year and a half to provide care to their residents.”

In February, a month after Sea View had been closed and DPH had been notified, the fight with the state escalated.

On Feb. 1, DPH acting director Stephen Davis was told that it appeared Sea View was closed, both accounts agree. He made a surprise visit to the facility and was told he must schedule a time with Comley. He came again the next day.

“Mr. Comley refused to permit me to enter,” Davis wrote in an affidavit.

According to the state’s account, Comley agreed to allow Davis to enter the facility with a police officer. Once inside the building, Comley refused to allow them to walk out of the entryway. Davis and the officer then left the facility.

According to Comley, Davis arrived with a police escort and entered the facility. He was screened by the staff, and he and the police officer were questioned about their exposure to Covid. Temperatures were taken.

Comley said Davis was not wearing an acceptable mask, saying it was his personal mask. Asked when he had last been tested, Davis said he could not remember. So, the staff administered a test at its expense.

Davis was not allowed to enter the facility because of his mask.

Comley said he told him there were no residents and that the facility was closed.

“As of two months ago, we were empty. They refused to believe me,” Comley said.

State law allows inspection agents to visit and inspect a licensed long-term health care facility at any time for any reason. The next day, the state filed a complaint against Comley for violating that law.

Comley wrote that Attorney General Maryanne Reynolds was also there.

“Comley refused to open the gate for them, unless they complied with his unauthorized demand to sign a waiver of rights document for the benefit of an unknown persons that Comley referred to as ‘members,’ the state asserted.

The members are of the new private social club, which requires any outsider to sign a waiver of liability for insurance liability purposes.

Comley’s account of the incident states: “The DPH inspectors refused to sign the waiver and were refused access. However, the Assistant Attorney General signed and was allowed into the facility along with Chief Dumas.”

The staff attempted to screen them for Covid symptoms, taking Dumas’ temperature, but were not able “to get a temperature from the Assistant Attorney General.”

“After a short conversation and full disclosure as to Sea View’s current status, Ms. Reynolds left of her own accord, despite full access being granted, stating that she was uncomfortable,” Comley wrote.

DPH filed suit against the Sea View Skilled Nursing & Rehab Services in Salem Superior Court. The state agency requested the court issue an injunction against Sea View, which it did on Feb. 18.

“The department has made multiple attempts to access the facility without success due to tactics employed by Comley. When a licensee refuses to allow the department entry, as in the case with Sea View and Comley, the commonwealth is reasonably and deeply concerned about what is happening out of sight of the regulator,” Reynolds wrote the court.

On Friday, Feb. 18, the Nursing Home Administrators Board also notified Comley that he must forfeit his license or face a disciplinary hearing. An hour later, the Essex County Sheriff’s Department, Reynolds, two DPH inspectors and Chief Dumas served a temporary restraining order and conducted a search warrant at Sea View.

“Sea View’s doors were not closed voluntarily,” Comley wrote. “Our ability to safely care for our residents was taken out of our hands, and we could no longer ensure individual choice in healthcare decisions could be made as it was being dictated by the government.”

He is looking forward to hosting weddings at Sea View, using the sunroom, drawing room and dining room.

“After dealing with death and dying for so many years,” he said, “it will be nice to watch new lives starting out.”