Looking for Something ‘Rewarding’ to Do? 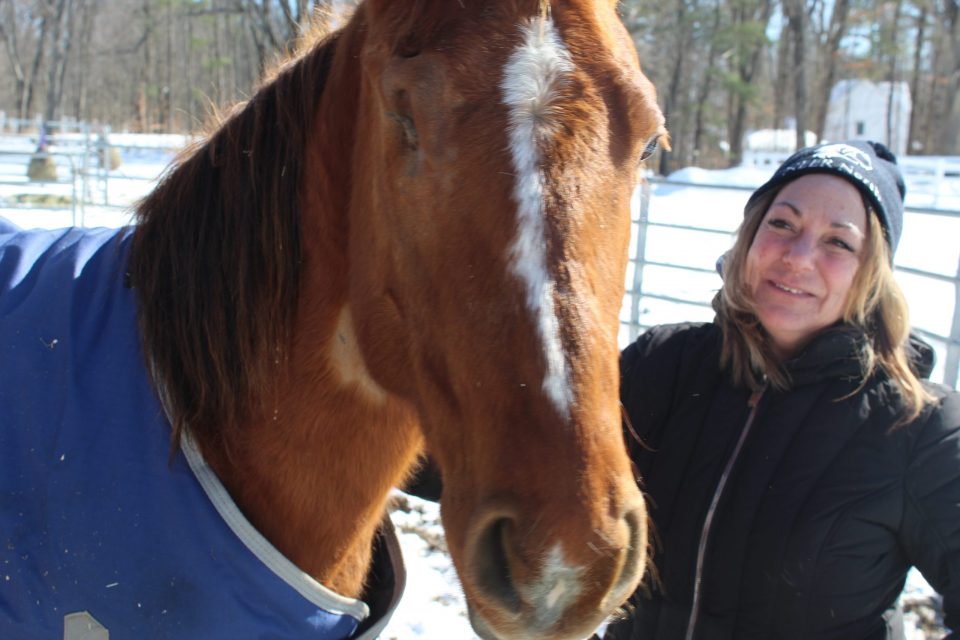 WEST NEWBURY – On a cold morning last week with snow piled under the feet of the horses and humans, Andrea Moore-Dickison had just finished combing out the mane of a miniature horse at the New England Equine Rescue North (NEER North).

“It was all matted,” she explained to president and founder Mary Martin, who introduced her as one of her volunteers.

Asked how often she helps out at the 13-acre farm, Moore-Dickison said, “Almost every day. I love it. It is very rewarding.”

She is not alone. There are more than 30 men and women who come regularly to help Martin care for 25 horses and donkeys, two sheep and a dozen or more chicken and ducks.

But more volunteers are needed.

Blaming it on the economy, divorce or death of caregivers, NEER North is fielding a growing number of requests to “surrender” horses.

“Over the last 12 months, we’ve received 113 surrender requests and taken in 36 horses and donkeys,” Martin wrote in NEER North’s end of the year newsletter.

Since April 2008, NEER North has been helping horses and owners in crisis, primarily in Massachusetts and New Hampshire. Operating to the mission of “rescue, rehabilitate and rehome,” NEER North is a haven where horses and donkeys are cared for, given medical treatment and trained or retrained in hopes of finding them a good home.

The end goal is adoption. “I’m proud to say we placed 42 of our rescues in terrific forever homes this year. Thanks to the generosity of our donors and the hard work of our volunteers, trainers, fosters, community partners, and professional helpers, these horses and donkeys – each with a backstory that could have ended in tragedy – are now thriving with adoptive families who are excited about giving them the happy lives they deserve,” she wrote.

In the revolving door of surrenders and adoptions, last week there were 11 full-size horses, three miniatures and seven donkeys. That doesn’t count horses that are being cared for in foster and retirement homes. Or ones that are being fed out of a separate Feed Fund until they can be placed.

NEER North also works with horse owners to prevent crisis situations by networking with other rescues and educating whoever will listen about equine abuse and rescue.

What Martin does not have enough of are two-legged animals of all ages, but the younger the better, as long as they are at least 14 years old. Volunteers are needed to keep the barn and stalls clean, haul manure to the front of the facility where it is picked up and do general yard maintenance.

Ann O’Sullivan, the rescue’s treasurer, keeps up with the finances, but Martin said she desperately needs more people to help in the office, write applications for grants, organize fundraising, compose the monthly newsletter and keep the website up to date.

Martin lives on the farm so she can be on call day and night, but she said she could not care for the animals without the help of a team of volunteers, trainers and dedicated board members, including Dr. Derek Cavatorta, a large animal veterinarian and owner of Black Brook Veterinary Services in Hamilton.

She said, “I have a good board,” which is headed by Denise Mootafian.

NEER North is certified by The Thoroughbred Aftercare Alliance, the Global Federation of Animal Sanctuaries and the EQUUS Foundation. It is top rated by the GreatNonprofits organization in 2021 and received the Platinum Seal of Transparency from Guidestar, the world’s largest source of nonprofit information.

“That takes a lot of paperwork,” Martin said.

Volunteers, headed by Caroline Matterson, run the tack room, a large thrift shop in one wing of the main barn. From 1 to 3 p.m. on Saturdays and Sundays, it sells off donated saddles and halters, blankets and clothing, almost anything that is donated that cannot be used in the rescue’s operation.

The tack room is a big source of operating revenue for the non-profit rescue. Funds from the shop pay for hay and grain and other operational costs.

“The shop saves us,” Martin said.

Some animals come to NEER North ill or injured, overfed or starved. Dayzi, a year and a half-old quarter horse came after she was kicked in the face. The rescue had to remove her eye.

Martin oversees each adoption, evaluating the needs and capabilities of an adoptive family with the horses’ personality and condition. Some horses, which have been abused, may not be right for a family or may just need a few months of care and training, she said.

Martin has been around horses most of her life, getting her first horse when she was eight. Her grandfather bought and sold horses, and she got to have a horse if she took care of two others.

After serving as a board member of a Rhode Island-based rescue, she started her own Massachusetts rescue in 2008. A licensed riding instructor and member of multiple horse-related organizations, Martin works with other equine rescues locally and nationally to advocate for equine welfare and raise public awareness of and support for rescue activities.

A self-described “penny pincher,” Martin is alarmed at rising prices for hay and shavings. She has learned to buy shavings by the truckload to cut costs. She also operates a feed fund, headed by Sarah Robinson, to help feed local horses in crisis and keep them in their homes.

NEER North purchased the farm several years ago when the barn where it was operating went up for sale. Two philanthropists donated $400,000 and $175,000 as a down payment. To buy the farm, NEER North took out a mortgage, which it is still paying on.

Martin has a long wish list, which this year includes a utility terrain vehicle. Its Kubota tractor died and has been replaced by a donated new tractor, she said.

The biggest item on her wish list, a sand arena, is also about to become a reality. Thanks to major contributors, the arena will be finished this summer, which allows better footing for the horses in demonstrations and evaluations by the veterinarian. Martin is looking for more arena sponsors, which would allow them to hang their banner on the arena.

NEER North also hopes to bring back open houses. “People love those,” Martin said. They were stopped during the Covid-19 shutdown.

The non-profit NEER North has several ways to help the effort. Supporters can make a tax-deductible donation, contribute to the Feed Fund or sponsor a horse, stall or corral. To learn more, visit neernorth.org.