Looking for a Home? Good Luck 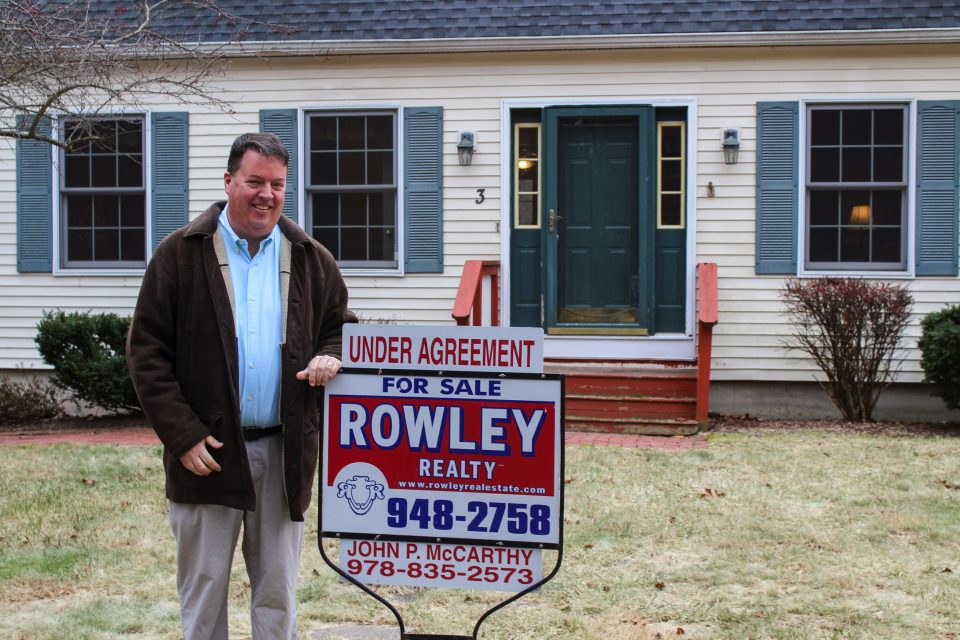 Photo: Stewart Lytle / The Town Common. John McCarthy in front of a home whose sale is under agreement.

REGIONAL – If you want to buy a home on the North Shore in 2022, two veteran Realtors have three words of advice: patience, persistence and most of all perseverance.

“Everything is cyclical,” said Katheryn O’Brien, who has sold more than 1,400 homes in her 35-year career. “We need to exert some patience.”

John McCarthy, owner of Rowley Realty, said, “There’s not anything out there to sell. There are lots of buyers. It’s a sellers market like I’ve never seen before.”

Home prices rose last year in almost all North Shore communities, some by a lot. West Newbury, Rowley and Ipswich saw prices rise between 35 and 40 percent. Georgetown had a 15 percent jump. Newburyport and Newbury had almost a 9 percent increase. Only Amesbury and Salisbury experienced a decline in home prices.

Every community was ranked by the real estate website Redfin as very competitive. Many homes on the market received multiple offers, and the buyers often waived some usual contingencies.

“Last year was one of the best in 20 years,” McCarthy said. In his two decades of selling homes on the North Shore, he said, “I can’t remember a better year.”

McCarthy does not expect this spring’s housing market to be as crazy as 2021, although mortgage interest rates remain low. “For 2021, I don’t see anything holding us back.”

He is seeing some buyers drop out of the hunt for a new home. “They are weary,” he said, of going to open houses and making offers that are outbid. “Some are just taking a break.”

Hardest hit are young buyers, looking to buy their first home, and Baby Boomers, who want to downsize from large homes, the experts said.

The big challenge is the lack of houses, particularly smaller, affordable homes, coming on the market. A balanced market between buyers and sellers has about six months of inventory. Houses on average in communities from Salisbury to Ipswich are going to the pending status in less than two weeks.

The Covid Pandemic is to blame in part, the experts say. The virus is pushing some homeowners out of larger cities and into smaller communities, driving up demand along the North Shore. Other homeowners, feeling uncertain about the crisis, are waiting to sell their homes and move.

Seniors, who make up probably the largest group of homeowners in our area, normally sell their homes after the children move out and downsize or move to warmer climates, O’Brien with RE/MAX Partners said. “That is not happening.”

Homeowners, fearing they may not find another home to buy or even rent, are staying put. “They are not willing to take a risk. New Englanders are by nature risk adverse,” she said.

The real estate crisis of 15 years ago is also still fresh on the minds of many buyers and sellers. That recession in housing was driven by mortgage companies requiring little down payment and poor qualification of buyers.

“I don’t see that now,” McCarthy said. “Buyers are putting up 20 percent down payments.”

Smaller, more affordable homes, many built in the 1950s, are not coming on the market like they once did, O’Brien said. Those are the homes that both first-time buyers and Baby Boomers are looking for.

Can you believe, she asked, that a $400,000 house is considered affordable.

One homeowner in his 90s put his small house on the market last year at a price under $400,000. He loved his home and wanted to pass it on to a new family, O’Brien said. He had several offers and agreed to sell the home at that price to a family. But before the deal could be closed, the homeowner died. The house went into a trust, managed by a bank that insisted the house should be sold for $100,000 more. The first buyers did not get the home, but it was sold for the higher price.

The housing market “will all come back,” O’Brien said. “Just be patient. Buying a home is still the best investment.”