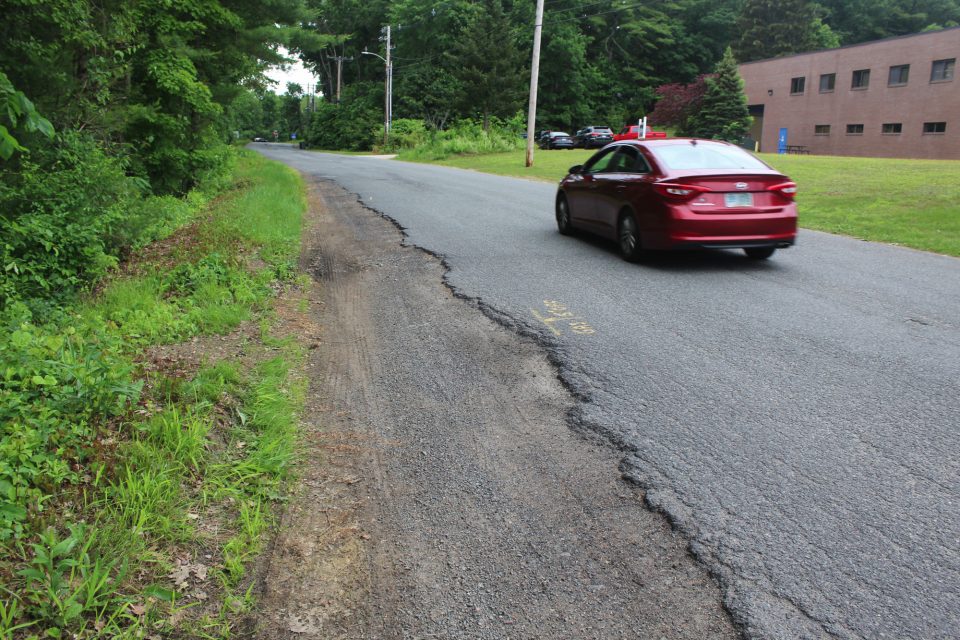 Photo: Stewart Lytle / The Town Common. Carleton Road which would have to be rebuilt for the trucks serving the proposed transfer station.

GEORGETOWN – G. Mello Disposal Corp. is batting 0 for 2 with town regulatory boards to win approval for its proposal to build a 500-ton transfer station on Carlton Drive.

Mello has appealed the Planning Board’s denial to the state Land Court. The long-time trash company must wait 21 days for the ConCom to file its decision before it can appeal the latest denial.

On a motion by ConCom members Rachel Bancroft and seconded by Chris Candia, the commission rejected the application because the resolution said Mello’s plan did not comply with the special conditions for not disturbing the property’s wetlands. The commission also said Mello failed to provide additional information requested.

Mello wanted to build a new road for the transfer station through wetlands. It proposed to replicate the disturbed wetlands by constructing new wetlands elsewhere on the property. An existing road was rejected because it would have required that the proposed trash processing building face neighboring homes instead of the highway.

There was little discussion among the conservation commissioners, who regulate only environmental issues for proposed projects.

The Planning Board members outlined significant challenges the proposed transfer station presents to the town.

Calling the proposed transfer station “a really big nightmare,” Planning Board Chair Harry LaCortiglia said, “For the last year or so, I have been pounding my head to see how we could make it work. I can’t come up with a solution.” He said the transfer station was “too intense” for the 3.5-acre site at the end of Carleton Drive next to Interstate 95.

Board member Joanne Laut agreed. “There’s just too many negatives that there is no solution for.”

The key issues board members cited were the increased truck and vehicle traffic at the intersection at Carleton Drive and E. Main Street (Rte. 133), which is already rated a dangerous level. It also balked at having Georgetown taxpayers pay part of the costs of rebuilding the narrow Carleton Drive.

The road that serves three businesses and one home would have to be torn out to a level three feet down and rebuilt with proper drainage, Mello’s engineers said.

“It’s completely unreasonable to ask the town taxpayers to fund the costs,” said Planning Board vice chair Bruce Fried, who sponsored the motion to deny Mello a site plan approval for its 500-ton transfer station.

The transfer station may also have to go before the Board of Health if the state Department of Environmental Protection (DEP) determines that the site is suitable for operating a 500-ton station.

The Zoning Board of Appeals may also have to rule on whether it will permit Mello to build the station on a water resource, but that would happen only if the Land Court rules that the Planning Board was wrong in denying the site plan approval.

It appears that the issue of the transfer station will go well into the new year. Mello, which leases city owned land at 203 Main St. for its current transfer station, faces an order from the DEP that may require it to enclose the current facility by next July or cease operations.