S&H Green Stamps Are Back 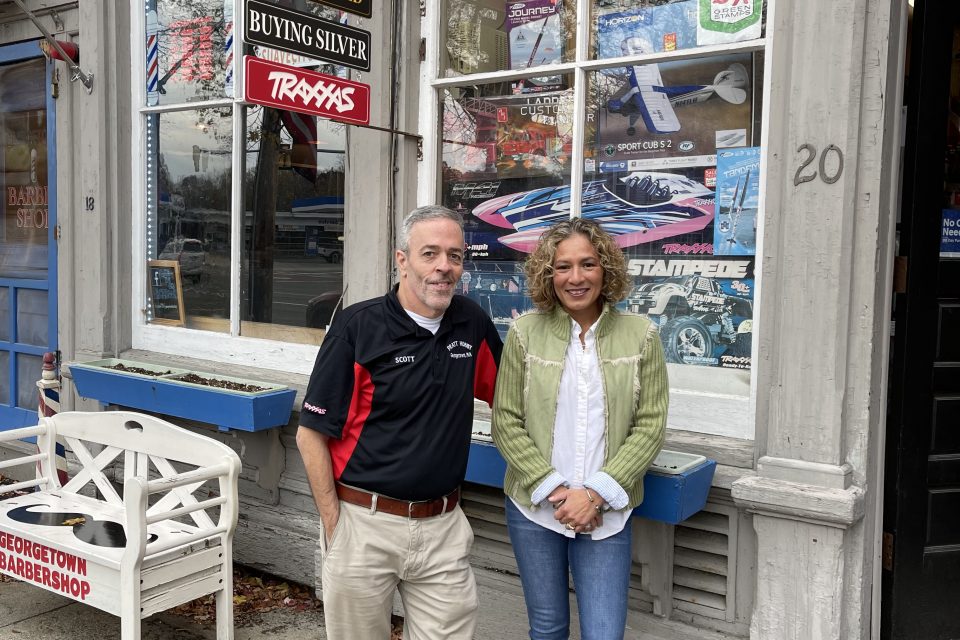 REGIONAL – If you are over 50, you probably remember helping your mother paste S&H Green Stamps in the little books and waiting excitedly for the new catalog to arrive to pick out what cool item the stamps could be redeemed for.

If you are under 50, you are probably like many of Scott Paganelli’s customers at Pratt Hobby Shop in Georgetown, who ask “Hey, what’s this?”

Michael Goolkasian, owner of The Natural Shop at 174 Newburyport Tnpk. in Rowley, said “People are inquisitive (about the stamps). We try to educate them. We’re giving them out to everybody.”

One of the things Goolkasian likes about giving out the S&H Green Stamps is that they give him and his team “something to talk to the customers about.”

Dawn Price’s Natural Dog at 155 State St. #5 in Newburyport along with Goolkasian’s Natural Shop and Paganelli’s Pratt Hobby Shop at 20 E. Main St. in Georgetown are part of a pilot program of rewarding customers with a rebirth of the S&H Green Stamps.

Yes, S&H Green Stamps, the nation’s first retail customer loyalty program, are back. The revival of the once super-popular Green Stamps is the brainchild of Carl Norloff, a Georgetown resident, who created and ran a community internet site called Local Mana before relaunching Green Stamps.

He and his wife, Lynn, who owned Lynn’s Vintage Flair in Rowley, are traveling across the country promoting Green Stamps nationwide in a “We’re Coming Back Tour” with Stucky’s, another iconic brand that once was a nationwide store chain.

“S&H Green Stamps, a brand established in 1896, set the standard for not only being a premier loyalty program, but also how a company can bring merchants, families and communities together in a fun and valuable way,” Norloff said.

“Not many loyalty programs can make that claim today,” Norloff said. “I am bringing back S&H Green Stamps to carry on that legacy of bringing together the community, merchants and families to make a difference and get rewarded for doing so.”

S&H Green Stamps was a rewards program operated by the Sperry & Hutchinson company (S&H), founded by Thomas Sperry and Shelley Byron Hutchinson. During the 1960s, the company promoted its rewards catalog as being the nation’s largest publication and claimed it issued three times as many stamps as the U.S. Postal Service.

Customers received stamps at checkout in supermarkets, department stores and gasoline stations among other retailers. They could be redeemed for products in the catalog. The program died in the 1980s.

Norloff, in relaunching the stamp loyalty program, has changed the meaning of S&H to Sustainability and Health. A computer software expert, he is developing a mobile app for stores and customers to track their stamps and rewards.

To join in the loyalty redemption program, stop in the Natural Dog Store, Pratt’s Hobby Shop or the Natural Shop, buy products as diverse as pet and human food items or model car parts and be rewarded a certificate for Green Stamps that can be traded for free products.

Goolkasian has a special display set up where Green Stamps can be traded for candles, protein products, toothpaste and other of his natural products. Paganelli gives out Green Stamps for purchases of remote-controlled model cars, rockets and parts.

Each merchant determines the value of the stamps in redeeming them for products.

Asked why the owner of the popular Pratt Hobby Shop would join the S&H Green Stamp program, Paganelli said, “It’s an iconic brand. People have fond memories of the stamps.”

He said he remembers his parents saving up on green stamps to get a grill.

At the Natural Store, Goolkasian said, “People really like it. We enjoy making a connection with our customers. We have good people.”