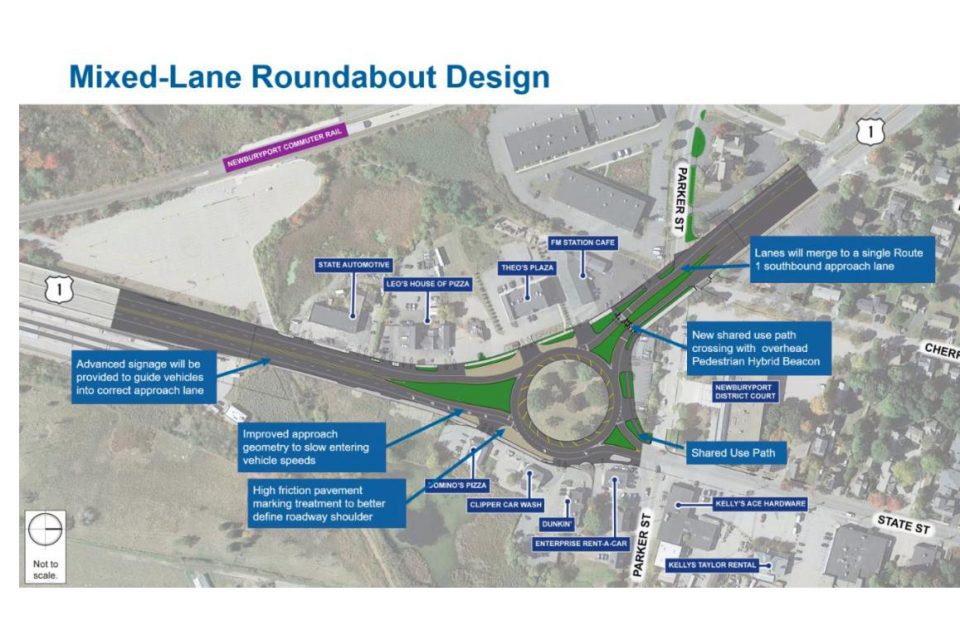 REGIONAL – Commuters who use Rte. 1 daily face a few tough years as MassDOT redesigns and rebuilds the highway, including the heavily traveled Newburyport Rotary.

By 2025, when the repaving project is complete, pedestrians and cyclists who travel on the Clipper City Rail Trail as well as the growing number of residents in the nearby Smart District high-rise residences will benefit by being able to cross Rte. 1 at the Rotary without risking their lives.

And maybe the most excited beneficiaries of the $12.5 million Rte. 1 repaving project will be those who drive on Bridge Road north of the Merrimack River bridge. Salisbury Selectman Chuck Takesian was adamant last week that motorists on Bridge Road needed MassDOT to make repaving the highway section in Salisbury a priority in its upcoming remake of Rte. 1.

“Drivers on Bridge Road have suffered enough,” Takesian said at a MassDOT public meeting where details of the project were discussed for the first time publicly.

For months, the heavily traveled highway has been bone-jarring for motorists who risked ruining tires and front-end alignments to drive the road that has been in Third World conditions after new water lines were laid under the street.

MassDOT Engineer Brian Fallon told Takesian that the state plans to grind up the asphalt and pave the Salisbury section of Route 1 next summer.

“We are going to make a special provision in our contract that the contractor addresses Bridge Road as its first item of business when they start their work,” Fallon said.

In a virtual meeting, MassDOT project manager Eric Nova outlined the repaving of almost 7 miles of Route 1 from the Newbury/Rowley town line through the Newburyport Rotary and north to School Street and Rte. 1A in Salisbury. Also, part of the project is the reconstruction of the intersection of Route 1 at Middle Road and Hanover Street in Newbury.

The project, which will be funded with federal and state monies, will begin in June and be completed by March 2025.

While most of the work will be a repaving project, MassDOT is redesigning the Rotary to lower speeds, keep motorists in designated lanes and improve pedestrian and bicyclist safety. The new Rotary will channel motorists into well-marked traffic lanes. New curbing will be added at the Rotary.

Route 1 south will be reduced to a single lane to slow traffic entering the Rotary, Lizza said.

There will also be a new shared pathway that will be protected by a High-Intensity crossWalk (HAWK) beacon to stop traffic when pedestrians and cyclists push a button. A HAWK beacon is used to stop road traffic and allow pedestrians to cross safely.

The city of Newburyport already has a HAWK light at the intersection at a crossing on State Street just north of the Rotary.

In the state’s design of the Rotary, it also is making the safety for users of the Clipper City Rail Trail a priority. The now-completed trail runs from the MBTA Rail Station north to the Merrimack River, across the waterfront in the proposed Market Landing Park and through south-end neighborhoods to Parker Street near the Rotary.

That left a gap between Parker Street and the rail station, which this redesign seeks to close by improving safety features around the Rotary. The same safety features will also benefit the growing number of residents of the new apartments built by Minco Corp. at the train station and on Rte. 1 where Haley’s Ice Cream now stands.