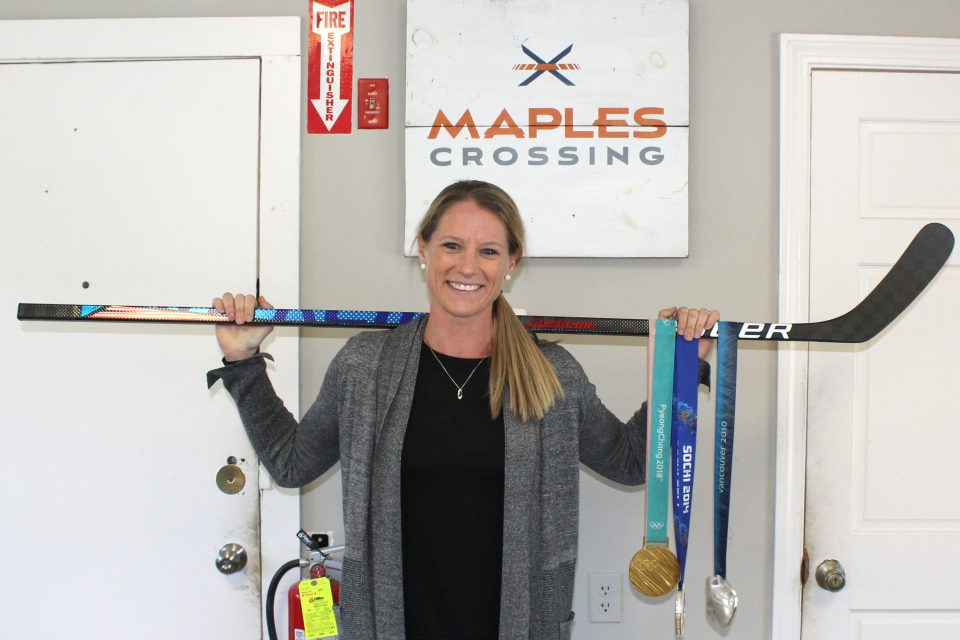 AMESBURY — It would seem that Kacey Bellamy has lived a charmed life. From the time she strapped on skates and picked up a stick, she has excelled at playing hockey.

Bellamy, 34, won three Olympic medals – a gold and two silvers – between 2010 and 2018 with the USA Women’s Ice Hockey Team. She was a star athlete in high school in several sports at the Berkshire School, a hockey defensive star at the University of New Hampshire and a seven-time International Ice Hockey Federation World Women’s Championship winner.

But the first thing Bellamy talked about when she sat down for an interview with The Town Common was the adversity she had to overcome to achieve her success, and what the new director of athletic development for Maples Crossing learned from it.

“I’ve personally experienced more failure than success in my career, and how I reacted to those failures ultimately set me up to finally reach my lifelong dream of winning a gold medal,” she said.

Losing to Canada in the Olympic gold medal game twice only propelled her to work harder and improve her conditioning, nutrition, leadership skills, and most important, her mental abilities.

As a college sophomore, when she failed to make the USA Women’s Hockey team, she asked the coach what improvements she needed to make to qualify for the team. She used the list the coach gave her as a training guide. In a few months, she made the team.

As the first-ever head of athletic development for the $70 million Maples Crossing sports complex here, Bellamy is bringing what she has learned from winning and losing at the highest levels of competition to motivate and teach North Shore youth athletes in all sports.

“Maples Crossing is exactly what I dreamed of doing after my playing career was over,” Bellamy said. “I wanted to be a part of an environment where I could share advice and use my experiences to help inspire and develop the next generation of athletes.”

The 410,000-square-foot Maples Crossing sports complex will include six ice rinks, office buildings for sports and fitness businesses, a hotel, restaurants and a reconstructed multi-sport turf field where the old New England Sports Park at 12 South Hunt Rd. once stood.

Opening day for the outdoor field is probably a few weeks away – depending on the weather. The ice rinks and other buildings on top of the hill overlooking Interstate 495 will probably take another couple of years.

“Maples Crossing is fortunate to have the skills and capabilities of Kacey Bellamy as an important part of our team. Kacey will bring excitement to the sports programming that will be unparalleled,” said Mike Gorman with Maples Crossing.

Bellamy’s vision is to create programming built on four pillars of player development — technical, tactical, physical and psychological. Her philosophy is work hard, stay humble and be kind.

“It takes complete buy-in to get to the next level and to achieve your goals as a team, and as an individual,” she said. “I want to incorporate these pillars at a young age to prepare these young athletes for a better future, in and out of the game.”

Bellamy said her favorite saying is: “If I had known then, what I know now …” She said she continues to learn every day and wants to share those lessons with youth athletes.

When the USA Women’s Hockey team lost in the final game of the 2014 Olympics in Sochi, she and her teammates took a new approach to training for the Olympics four years later in South Korea. They did not focus on beating Canada, their nemesis to winning a gold medal in the two previous Olympics. They focused on improving themselves, particularly their nutrition and mental skills.

“Our goal was to get 1 percent better every day,” she said. “That’s how we won.”

“In some ways, the actual sport is the easy part,” Bellamy said in the announcement of her new position. “Getting a child to listen and buy-in to the other side like nutrition, mental skills, team building, leadership are the areas in which you simply separate good from great. Those are the day-in and day-out habits I want to embed into these athletes.”

Since she arrived at Maples Crossing in mid-August, she has been designing her programs and making contacts in the community. She and Gorman have bonded, often seeming to finish one another’s sentences.

“We just want to make a difference in a child’s life,” Gorman said at the interview. Bellamy added, “We want to be a child’s best memory.”

She plans to give talks to youth sports teams and in schools. If interested, contact her at Maples Crossing.

Bellamy has much to teach. Until she was 14, Bellamy played hockey on boys’ teams, making friends with some, intimidating others and being tough enough to take their hardest checks, she said.

At Berkshire in her senior year, she lettered in not only hockey, but field hockey and softball.

She ranks third all-time at UNH in career points by a defensive player.

In 2017, Bellamy scored two goals in the IIHF world championship gold medal game against Team Canada and was named U.S. player of the game. She was an alternate captain for USA world championship teams in 2013, 2016 and 2017. She was co-captain of the team in the last Olympics.

Bellamy announced her retirement from USA Hockey in May 2021 and played professionally for the Boston and Calgary teams.

“Kacey’s accomplishments speak for themselves,” said Joe Callahan of Global Property Developers in Bridgewater, the developer of Maples Crossing. “Kacey understands what is required not just of great athletes, but great people. She is an integral part of our vision here at Maples Crossing, and we are lucky to have her on the team. Bellamy understands the challenge ahead, and, as per the usual, is excited to embrace it.”

As important as her success is to inspire, Callahan said, “her vision for creating a better approach to preparing young athletes to be successful human beings is even more important to us.”