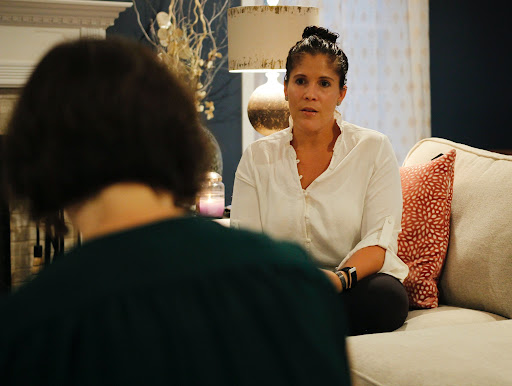 Jennifer Gately, a retired Massachusetts National Guard Sgt., sits down for an interview to share her personal experience regarding the Afghanistan War. Photo credit: Libby O’Neill / The Town Common

ROWLEY — On Aug. 30, the U.S. ended evacuation flights from the airport in Kabul, Afghanistan, effectively completing its withdrawal from a conflict that stretched across two decades.

Rowley resident and retired Massachusetts National Guard Sgt. Jennifer Gately was among the first wave of troops sent to Afghanistan in the wake of 9/11. When the twin towers of the World Trade Center were hit only six months into her service career, she was 19-years-old and working at her local pizza shop.

“I did not join for this idea of going off to war. It was not in my mind,” said Gately, who is originally from New Bedford and was raised by a single mother. The National Guard was initially a means to pay for college. When she enlisted, the U.S. hadn’t been at war in years. “I knew right then and there that was going to be changing my life dramatically,” Gately recalled about the attack on 9/11. “I cried, cried for everyone who lost their life. Cried for myself, because I signed that dotted line and I was going to have to go.”

From that point on it was a waiting game. Gately spent her time glued to the television and house phone until the call to serve inevitably came. Her unit, the772nd Military Police Company, was summoned first to Camp Edwards on Cape Cod, and then on to Kabul by June, 2002. “There were no expectations, other than it was really scary,” said Gately of her memories of those early days in Afghanistan. A fire fight derailed her flight from landing for a week. Bagram Airfield was still in the process of being set up; there were no bathrooms or showers when Gately first arrived. “Not that we were winging it, but it felt like we were kind of establishing how it was going to go.”

Gately’s unit was split into different platoons, with hers sent on to the military training center in Kabul to protect Afghan nationals as they were being trained. She felt the mission had a useful purpose, and it made her appreciative of freedoms she once took for granted. “Women were covered head-to-toe,” said Gately. “You didn’t really see them out unless they were bathing with their children right outside their house.” She eventually had to be pulled from her role as a gunner during missions since it put her in a publicly visible position as an uncovered woman. “You know, we weren’t rich,” Gately reflected of her life back in the U.S. “But I had a car, I had friends, I could go out to Friendly’s.” Slowly but surely, Gately watched as her unit went from living on cots and blown-out buildings to a more established structure. Over the months, living arrangements became a little more comfortable. 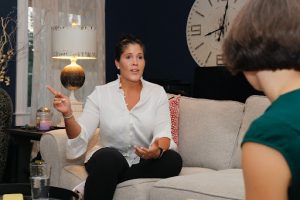 Jennifer Gately, a retired Massachusetts National Guard Sgt., sits down for an
interview to share her personal experience regarding the Afghanistan War. Photo credit: Libby O’Neill / The Town Common

Gately’s deployment ended in April, 2003, but the war in Afghanistan continues to have reverberations as far afield as Massachusetts, even after the last American service members have departed from Bagram. Emma Tobin, chief program officer at International Institute of New England (IINE), said during a phone conversation that their agency is expecting 150 evacuees in the immediate weeks. Until recently, Afghan people came to IINE as either refugees or on Special Immigrant Visas (SIVs). However, Tobin said that due to the urgency of the current situation, many evacuees are arriving via different channels. Each person who arrives on the ad-hoc State Department program receives a one-time stipend of $1,250 and is not currently eligible for additional direct funds.

Tobin said the majority of IINE’s Afghan clients come to New England as young families, with an average group size of five and many parents in their 20s and 30s. Tobin was very hopeful that people will continue to arrive past the Aug. 31 deadline set by the Biden administration. “I can’t let myself believe it will be a hard cut-off on the thirty-first,” she said. In a written statement, Diane Shohet, director of development and communications at IINE,confirmed that there are almost 88,000 Afghan allies and family members in the SIV process who are in grave danger, and an additional 50,000 evacuees now slated to arrive. Shohet wrote, “IINE is preparing to expand its capacity even further to respond to an exodus on a scale not experienced since the U.S. evacuation from Vietnam 45 years ago.”

Tobin emphasized that it’s crucial the public understand that the current evacuees aren’t receiving traditional resettlement services. She said refugee service agencies are going above and beyond, but it’s still not enough to fill the pressing need for assistance. IINE has resettled over 330 Afghan people since 2014; the largest community of Afghan refugees in New England resides in Lowell. “I hope these communities will welcome them,” Tobin said.

Gately expressed mixed feelings when asked about the timing of the withdrawal from Afghanistan. “We have enough going on in our own country. I walk down Mass Ave and see hundreds of people that need our resources…So it’s a little frustrating for us to be in conflicts that don’t seem to end.” On the other hand, she wondered aloud at the point of the last 20 years and worried about the oppression of women in the country as it moves forward under Taliban rule.

“I think the love for the military and law enforcement is strong when bad things happen,” Gately added. “There’s a lot of support. But then it dies down, and people do forget. They forget that we had tens of thousands of troops over there until very recently.”

Robert Breaker, chairman of the Rowley Veterans Committee, is working on two projects to help ensure that those who served are not forgotten. The first is the cleaning and restoration of the stone monuments at the town offices, a process that should be completed next year. The second project was to enroll the Rowley Burial Ground in the Wreaths Across America program, which kicks off in December and will allow supporters to go online and sponsor wreaths for the 500 or so veterans buried in the cemetery.

Asked if he’s concerned about veterans of the war in Afghanistan, Breaker replied, “Absolutely. The conflict, the stress, the things they’ve seen, the PTSD, is quite evident in the suicide rate.”

He stated that the committee is available to help veterans find the services that they need. They have access to a county veteran’s agent, for instance, and there are always coffee socials going on.

“I stress to people, don’t keep the secret,” he said, noting that the recent focus on Afghanistan has brought back painful memories for some. “If you see someone who’s hurting, who needs help, give us a call.”