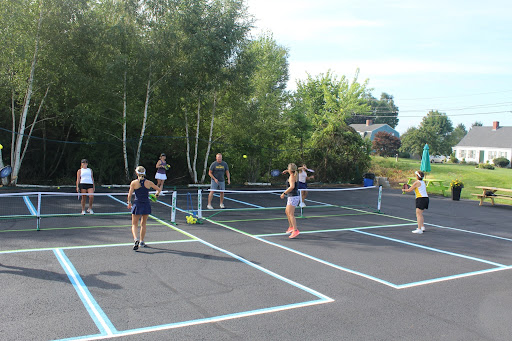 REGIONAL – If your feet are moving a little slower, but you still love to play competitively, you may want to try one of the country’s fastest growing sports, known by the odd name of pickleball.

Pickleball games are fast, played only to 11 points (you must win by two). It is easy to learn, although the scoring system makes tennis scoring (what is love-40?) look easy. In pickleball, you have to run and have good reflexes like tennis, but a pickleball court, at 44 feet by 20 feet, is about a third the size of a tennis court.

And “It is highly social,” said Deb Binder, who has been playing and teaching pickleball for four years. That’s probably because players are closer together.

Pickleball is played in several North Shore communities, and the demand for courts is fierce. 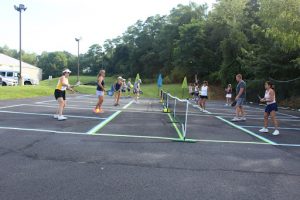 The Newburyport Tennis Club, which has six popular indoor tennis courts, has added three new pickleball courts on a largely unused parking lot on Low Street. On a recent Saturday morning, the club attracted 12 enthusiastic players to a free clinic who came to learn to play pickleball from Binder.

“It’s so big. So huge,” said Mike Perrota, the club’s general manager. “It’s growing by leaps and bounds.” He believes pickleball may someday become an Olympic sport, as skateboarding, karate and surfing have.

For those who winter in Florida, learning to play pickleball is almost a must. The game has become very popular in the sunshine state.

To meet the growing demand for pickleball, the tennis club is holding a pickleball open house at the courts from 10 a.m. to noon on Sept. 4.

“We are beyond excited to add pickleball to Newburyport Tennis Club’s sports roster. Our three new courts are ready for you,” the club wrote in its newsletter.

The tennis club’s parking lot, which it plans to resurface next year, is surrounded by colorful umbrellas over brightly painted picnic tables for players to relax and watch games while waiting their turn to play.

Joanne Gay, a tennis player who came to learn pickleball at the clinic, said, “It is a great game as you get older and can’t cover the court as well.” 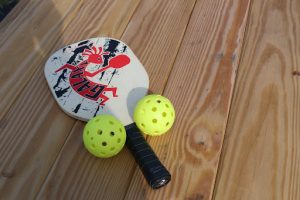 Pickleball was dreamed up in 1965 by Joel Pritchard, who was elected to Congress seven years later, along with two friends, William Bell and Barney McCallum. As the story goes, they decided to play badminton one afternoon, but could not find the shuttlecock (another weird sports name) or rackets. So, they improvised, using ping pong paddles and a whiffle (yet another weird sports name) ball to play on the badminton court.

A different version of its origins, told by Bell, was that Pritchard’s children were getting on his nerves one afternoon, so he gave them ping pong paddles and a ball and told them to go play. When the children did not return in an hour, he found them having a blast hitting the ball on the badminton court.

The badminton net was later lowered and the game evolved from there.

Pickleball today is played on a court with a low net, using a graphite paddle ($120 – $150) to hit a wiffle ball across the net to one or two opponents. Unlike a tennis ball, the wiffle ball does not bounce high or in a predictable way, so footwork (taking lots of small steps) is required, and hitting the ball in the air from just outside “the kitchen” can often win points.

What is the kitchen? A pickleball court is laid out opposite of a tennis court. The service boxes are at the back line, not close to the net. The area between the net and the service boxes is called the kitchen. Just like when your mother was cooking Sunday dinners, you are supposed to stay out of the kitchen.

The game is played like volleyball. If a server wins a point, he or she keeps serving. And you can only score a point if you are serving.

Maybe the most important shot in pickleball is a dink. In tennis it is the same as a drop shot. A dink lands close to the net, forcing the opponent to run into the kitchen to hit it and then retreat behind the service line.

“If you are a good dinker, you can rule the world,” Binder told the players who attended her clinic.

The serve is underhand, and there are no second serves.

Scoring is complex. The description the U.S. Pickleball Assn. (Yes, there really is a Pickleball Association) gives on its website how to score in doubles takes almost 500 words. For example, to start a match, the score is called: zero – zero – two. At least zero in pickleball is not called love.

Visit the national pickleball association’s web page to learn all the rules at usapickleball.org.

So how did this game come to be called pickleball? Again, it depends on who is telling the story.

Pritchard’s wife, Joan, started calling the game pickleball because the combination of different sports reminded her of the pickle boat in crew, the last boat to finish, according to English yachting lore, because it stopped to catch and pickle herring.

The more credible story is that the game was named after the family’s cocker spaniel, Pickles, which loved to catch the ball and run off with it, stopping play. Thus, it was Pickle’s ball.