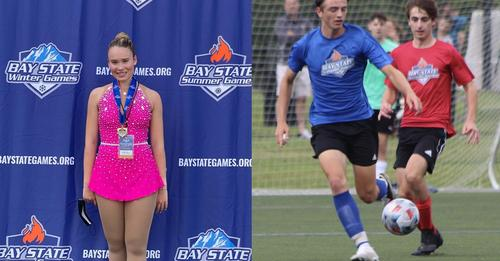 After holding Summer Games for the first time since 2019, Bay State Games has selected its Athletes of the Year. This award is based on participation in the Games and other athletic achievements. The 2021 selections for Athlete of the Year are Jordan Talty, Female Athlete from Reading and Brady O’Donnell, Male Athlete from Newburyport.

Brady O’Donnell is a rising senior at Newburyport High School. Brady has been playing soccer for 15 years. This past summer, he played on the Northeast team in the Boys Soccer Showcase. He scored every goal for the team in the tournament.

When he was born, Brady was diagnosed with a very rare syndrome as parents Carrie and Chris were told to prepare themselves to raise a child with significant disabilities. At age 3, defying his diagnosis, Children’s Hospital Boston named him its 2007 Children’s Miracle Network (CMN) Champion for Massachusetts. By age 3, Brady endured several surgical procedures to remove precancerous lesions, had overcome a brain abnormality and legal blindness in his left eye to thrive as a student-athlete.

Brady made the varsity soccer team as a freshman at Newburyport High School and continued to grow over the next two years, becoming not only the leading scorer as a junior this year for his high school team but second in overall points in the entire conference. His efforts led Newburyport High School to its first ever Cape Ann League Championship in the fall of 2020. He was named team captain as a junior and was also named Most Valuable Offensive Player this past season. Other soccer accolades include being named to Cape Ann League All-Star First Team and Daily News All-Star Team. Brady plays club soccer for Rush North Shore and just returned from Barcelona where his team placed 3rd in a European tournament after they trained at FC Barcelona, Espanyol Girona, and Villareal.

A well-rounded student-athlete, Brady has excelled academically as well. He was inducted into the National Honor Society last year, has made the honor roll every semester of high school, garnering an impressive 4.3 grade point average.

Outside of playing soccer, Brady volunteers to coach players aged 3-5 with Newburyport Youth Soccer, 5th-8th graders with Elite Week. He also volunteers for Christmas Tree Santas, distributing free Christmas trees to area families in need. Since was little he has been a snow angel, shoveling and raking for his elderly next-door neighbor.

Jordan Talty is a resident of Reading who has been competing in figure skating for 14 years. This past year Jordan was diagnosed with postural orthostatic tachycardia syndrome. Determined not to let that interfere, she has persevered in her skating by passing her senior freeskate in December and qualifying for the Excel National Festival where she competed in August.

Jordan competed in Bay State Games for the first time in 2012 and won gold in pre-preliminary test track. Most recently, Jordan won gold in senior ladies short program and silver in senior ladies freeskate in the 2021 BSG figure skating competition. In 2017, she was also a show performer, which she earned by winning gold in the open freeskate. Jordan has competed at two State Games of Americas and has won several medals. In 2017, she won two medals, and in 2019, she followed up her performance by winning 5 medals (3 gold and 2 bronze).

Jordan also spends time as a Reading Kids Connect Mentor, a Reading Recreation Special Skates Volunteer, and a North Shore Skating JR Club volunteer where she teaches Learn to Skate where she is a great role model and mentor to the younger skaters just starting their journey. Jordan is headed to Michigan State University this fall.