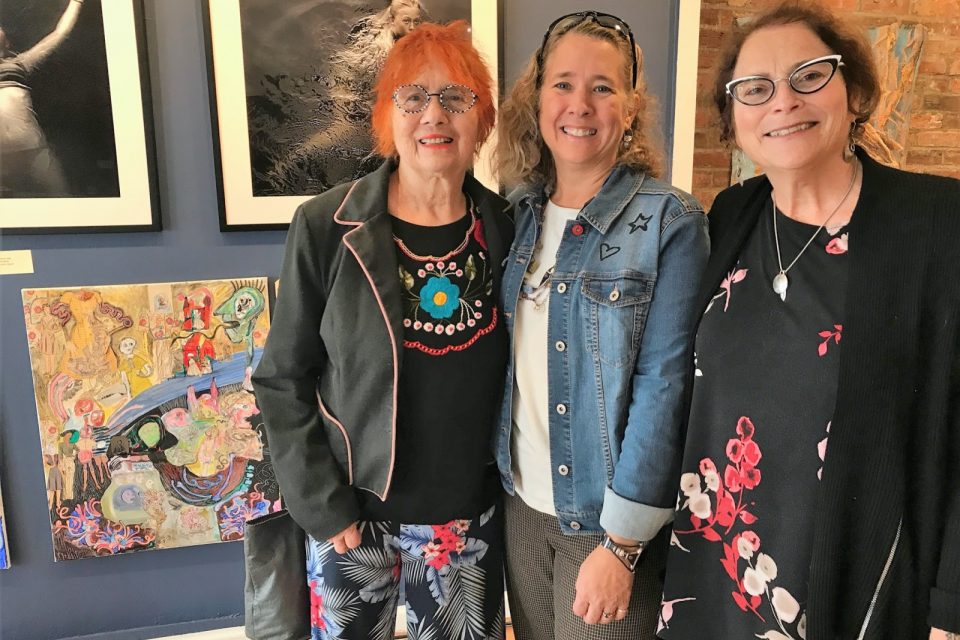 Newburyport – The PEG Center for Art & Activism will host a memorial exhibition of art by Erika Marquardt entitled “Bunker Art” from August 10-28 at the Paula Estey Gallery located at 3 Harris Street in Newburyport. There will be a special reception and remembrance of the beloved artist on August 19 from 6-8 p.m. with remarks by her daughter Taika Brand and Susan Erony, a fellow artist who collaborated with Marquardt. Colleagues, friends and the public are invited to attend the event.

“Erika was one of a kind and I treasured having her in my life,” said Paula Estey. “Many people knew her from her walks around Newburyport with her dog Charlie. With her blazing red hair and kaleidoscopic clothing, she brightened the lives of everyone she met and inspired many to embrace art in their lives.”

Erika Chrystal Marquardt was born in Potsdam, Germany and emigrated to Canada, then the United States in her twenties. She lived in New York City before settling in Massachusetts. A self-taught painter, she worked as a graphic designer, then weaver before she picked up brushes and a myriad of materials to communicate her inner world and ideas in mostly multi-color collages.

Her work, described as “outsider art,” is expressionistic in style, raw and powerful. Over decades she exhibited in Europe and several states in the U.S. Her courage, zeal for life, and humor was reflected in the canvasses she covered with color and artifacts. Her paintings about her childhood in Berlin during WWII were particularly graphic as she strove to capture the brutality of war in the symbolic imagery of pregnant skeletons, ghostly angels, bomber aircrafts, and infamous “penis men.”

Marquardt wrote: “I see myself as an intuitive painter. When I paint my figures, I feel that they are a part of a tissue I pull out of myself slowly, like pieces of skin that rip in the process. I grew up in the company of women and children, trying to survive a war I couldn’t understand.”

Marquardt celebrated her eighty-fourth birthday in April and died on April 30, 2021. She had dozens of art exhibitions in America and Europe and authored several books of art and poetry chronicling her memories of the war and her fight against ovarian cancer in “Memories of A War to Come” and “Memories of a Cancer to Come.” Her paintings also appear in a dozen art books.

For years, she collaborated with Jewish painter, Susan Erony of Gloucester, to create more than a thousand canvases in recognition of The Thousand Year Reich. Her most recent paintings captured the culture and beauty of Oaxaca, Mexico, where she lived during the winter months.

Managing Editor of Berkshire Fine Arts Astrid Heimer shared a review of her friend’s work by novelist Gregory Maguire, author of “Wicked: The Life and Times of the Wicked Witch of the West.” “The artwork is raw and accomplished at once, the stuff of real life. The poetry seems to compliment the strength of the artwork beautifully by being a bit more formal in some ways, a bit reticent in others. It is hard for me to imagine how this good hard work will be welcomed in the world. I hope fulsomely as it is welcomed here! I am honored to have a copy,” Maguire said.

Marquardt is survived by her children, Anika, Taika, Alex, and Joshua; by her sister, Anne, and her brothers, Rainer and Peter; by her grandchildren Ani, Jackson, Carli, Diego, Elias, William, Tyler and Emily; by her first husband Dan Brand; and by many nieces, nephews, and cousins. A service in celebration of her life will be held on September 18, 2021 at 2 p.m. at The First Religious Society, Unitarian Universalist Church at 26 Pleasant Street in Newburyport.

The Bunker Art exhibition can be viewed during regular gallery hours at Paula Estey Gallery: Tuesdays through Thursdays from 12-5 p.m.; Fridays and Saturdays from 12-4 p.m. 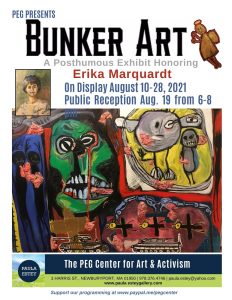 Flyer for the event