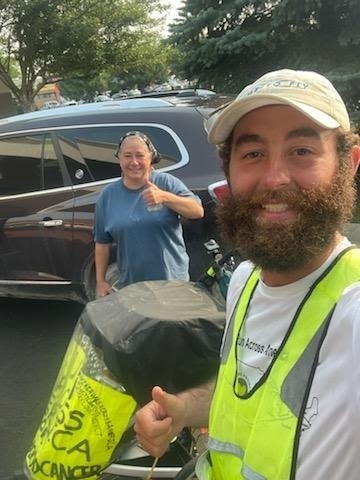 Mike with another new friend on the Lincoln Highway. Photo by Mike Wilson.

OSWEGO, IL – Mike Wilson lost a tooth as he ran across Illinois last week. It was not the first time he had lost that tooth. Twenty years ago, he fell off a boat and knocked out it and two other teeth.

As Mike runs the last 1,000 miles of his Run Across America, he found a dentist here next to the hotel he was staying at for the night. The dentist and his staff were so amazed at his story of running from Oregon to Newburyport to raise money for charity, they shot his photo and posted it on Instagram and his web site.

Mike is running across the country to raise money for two organizations, Lucy’s Love Bus in Amesbury and MaxLove Project in California. Both non-profit groups help people cope with cancer.

Making the run solo with no support team in a car or trailer, Mike hopes to arrive in Newburyport in about four weeks. He is still looking for a new running stroller. The one he uses to carry his gear, food and other supplies is getting worn.

Mike’s route follows the historic Lincoln Highway, U.S. Highway 30, which was the nation’s first coast-to-coast highway. By the time you are reading this story, he is probably halfway across Indiana, which he thinks will take him three days.

He is looking forward to reaching the Atlantic and running up Route 1 through New York, Connecticut and Rhode Island into Boston before heading to Newburyport and a welcome home party on the Merrimack River waterfront.

As he ran through Illinois, two cars stopped to ask what he was doing and where he was going. Both carloads warned him to bypass Joliet. Their concern worried him enough that he called a friend, K.J., who grew up in the area to ask his advice. K.J. said he would probably be fine, but Mike was considering calling the Joliet police to ask for an escort through town. 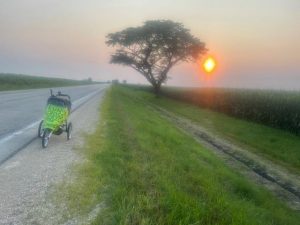 Mike Stroller on a highway in Illinois. Photo by Mike Wilson

To join in Mike’s historic journey, consider making a donation to Lucy’s Bus. 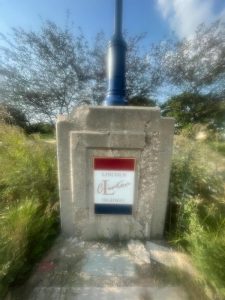 Pick up The Town Common or follow him on the thetowncommon.com each week to track Mike’s progress across America.