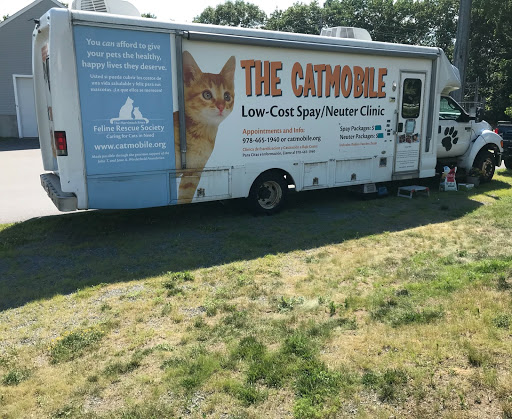 SALISBURY —The Merrimack River Feline Rescue Society (MRFRS) is getting a new Catmobile thanks to a replacement reserve, many donations from loyal supporters and a $70,000 emergency grant from the John T. and Jane A. Wiederhold Foundation. The Catmobile is a mobile spay/neuter medical facility housed in a specially outfitted 33’ truck.

It houses a surgical suite, exam area, anesthesia service and accommodations for up to 30 cats, and is staffed by a veterinarian and technician. The truck is currently on the road four days a week, traveling to more than 20 locations to make it convenient for individuals to spay or neuter their cats. In addition to surgery, each cat receives a brief exam, rabies vaccination (for cats over 12 weeks of age) and FVRCP (distemper) vaccination. 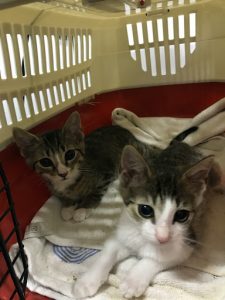 The Catmobile recently performed its 70,000th spay/neuter surgery on Catmobile 2 via its successful Catmobile program which began in 2008. MRFRS’s first Catmobile was lost to a fire at the end of 2017 (no one was in the vehicle at this time so no people or animals were harmed). MRFRS began to rely on the second Catmobile which was purchased in 2011 to expand spay/neuter efforts. Unfortunately, over the past seven months, the now ten-year-old Catmobile 2 was unable to operate for 55 surgical days due to mechanical issues like generator failure and fuel leaks and has reached the end of its life as MRFRS’s primary mobile unit.

In anticipation of this, MRFRS together with many of its donors have been working over the last 12 months to raise the money needed for a new Catmobile. Thanks to a replacement reserve set aside by MRFRS, many gifts from donors and a grant from the John T. and Jane A. Wiederhold Foundation, MRFRS now has 100% of the funds to purchase a new mobile spay/neuter clinic. “Catmobile 2 is far from finished contributing to helping us achieve our mission and generate real impact to those cats and caretakers who need access to affordable spay/neuter and wellness services in the greater Salisbury community,” said Dave Betournay, MRFRS’s Interim Director. “The new Catmobile will continue to operate as a mobile unit in Eastern and Central Massachusetts. We are truly gratified to be able to continue to bring affordable lifesaving and quality-of-life-improving services to those cats and their caretakers who desperately need them in Massachusetts and Southern New Hampshire.”

Each month, the Catmobile visits about 20 different towns in Eastern Massachusetts, from as far north as Salisbury, as far west as Hopkinton, Gardner, and Fitchburg, to as far south as Attleboro. The fee for male cats is $100, and female cats, $150, and frequently, reduced pricing is available, due to grant dollars. Betournay noted, “Our clients are all seeking to do the right thing and provide good care for the pets they love, but there are real challenges with accessibility to vet care. Bringing affordable care directly to their communities makes all of the difference.”

“We could not have reached this milestone without the help and support of our loyal donors, animal rescues and welfare organizations around Massachusetts,” stated Betournay. “They are on the front lines of identifying areas where the cats and caretakers that need our help are, and they partner with us to promote the Catmobiles’ schedule and availability to those who need our help the most.” Kit Burke, Shelter Director of Quincy Animal Shelter, declared, “The collaboration of the Catmobile and Quincy Animal Shelter to curb the overpopulation of cats in South Shore communities makes a difference. So many owners want to do the right thing and have their animals fixed but are unable to afford the surgeries at a practice-based veterinarian. Their grassroots approach to providing a mobile option for underserved communities has helped immensely. Combined with proactive spay and neuter programs within our shelter, the Catmobile has helped the population of homeless cats within Quincy and the greater South Shore area to steadily decrease. We are lucky to have them as a resource to our community.”

The Catmobile’s monthly schedule and information about reserving a spot are located on MRFRS’s website by visiting: mrfrs.org. Cat owners can also email catmobile@mrfrs.org or call 978-465-1940.