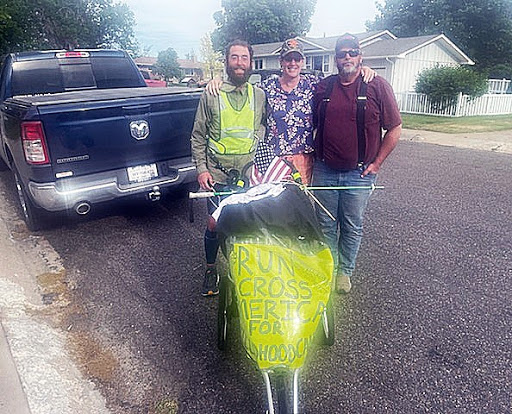 SIDNEY, NE – When Mike Wilson was in the first grade, he made a friend, Rhea, who shared the same birthday in January. Fast forward 20 plus years and Rhea’s parents. who live in Pine Bluffs, WY, drove about 60 miles to Nebraska to bring Mike water and sports drinks to help him press on in his quest to Run Across America.

Mike, a professional trainer in Portsmouth, MA, is running from Oregon to the Merrimack River waterfront in Newburyport, a journey of more than 3,000 miles. He is running about 40 miles per day. For those of us who think running one 26.2 mile-marathon would be amazing, Mike is running a marathon and a half every day.

He has only his running stroller. There is no chase car, no one watching over him. And no one to talk to when he gets tired.

When the Town Common caught up with him this week just outside of Sidney, he was excited to leave the high mountains of Wyoming and begin his run across the American prairie. The terrain is flatter, surrounded by wheat fields, but it is also warmer. One day last week it hit 93 degrees.

How does he maintain the pace day after day? He said he trained to be a long distance runner on the 10 percent rule. He started running a mile the first day, then added 10 percent the next day and 10 percent the following day until he reached his goal of running dozens of miles every day.

Mike is running across America to raise money for his favorite charity, Lucy’s Love Bus, a non-profit organization in Amesbury, that fights cancer by offering free integrative therapies such as acupuncture, reiki and massage to help balance the effects of traditional treatments.

The shirts can be purchased for $20 by visiting lucyslovebus.org.