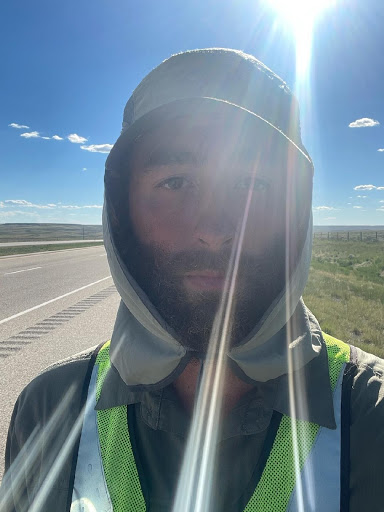 RAWLINS, WY – The owner of the Sunset Inn in Wamsutter, WY, gave Mike Wilson a free room for the night when he heard Mike’s story about his running across America to raise money for two worthy charities in Massachusetts and California.

Mike, a professional trainer in Portsmouth, NH, is running from Oregon to the Merrimack River waterfront in Newburyport, a journey of 3,000 miles. He has only his running stroller. There is no chase car, no one watching over him. And no one to talk to when he gets tired.

When the Town Common caught up with him, he said he had been running a regular 40 miles a day, much of it on inclines through the high Wyoming territory. And it had been lonely. In more populated areas, he had run into college students, families and store owners who befriended him.

Last weekend, he was heading into cowboy country, about 100 miles from Laramie and another day’s run to Cheyenne, he said. He was looking forward to crossing the state line into Nebraska, where the terrain is flat, and he will be running past fields and fields of corn.

To ease his loneliness, Mike would love it if you could post a few words of encouragement on his Facebook page. It will remind him that many friends and fans back here in Massachusetts are thinking about him as his sacrifice during Mike’s Run Across America.

Mike is running to raise money for his favorite charity, Lucy’s Love Bus, a non-profit organization, that fights cancer by offering free integrative therapies such as acupuncture, reiki and massage to help balance the effects of traditional treatments.

The shirts can be purchased for $20 at lucyslovebus.org/mikesrun. The MaxLove Project is a California-based program like Lucy’s Love Bus.