‘The Golf Gods Will Strike You Down’ 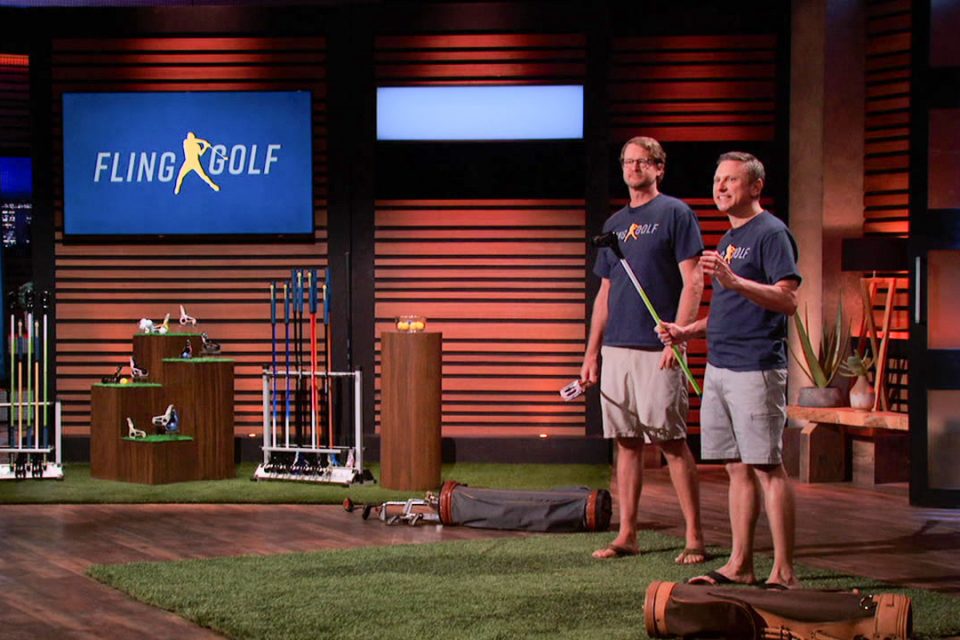 REGIONAL – Walking down the hallway and through the double doors into the Shark Tank , Alex Van Alen and John Pruellage were “pumped” to present their new, fast-growing sport of FlingGolf to the five investor-sharks and to the rest of the world on the popular television show.

“Our nerves were cranking. Our adrenalin was flowing,” Van Alen said. The presentation to the sharks last August in the Las Vegas Venetian Hotel had been months in the making. They had practiced their pitch dozens of times, calculated how much to ask the sharks for and even pre-boxed dozens of FlingSticks to fulfill orders. As the show broadcast to the mammoth ABC audience at 8 p.m. on Friday, May 14, their cell phones started going off, telling them their lives were about to change. Orders for FlingSticks poured in.

In the four days after the show aired, sales matched all the FlingSticks the company had sold in the first four months of 2021. To their surprise, most of the orders were for the premium FlingSticks, priced at $204 each, rather than the entry level sticks, priced at $119 each, which were already waiting to be shipped out. “I saw you guys on Shark Tank and ordered my stick the same night,” wrote Tom S. from Chino Hills, CA. “I have to say, this is a blast. FlingGolf just may be the answer to getting back on the course.” Jim C. agreed. “I bought 2 and I love them. Lots of curious eyes at the driving range. Let people try them, and they love it. They are a blast to use.” With the colorful FlingStick, a FlingGolfer hurls the ball and shapes each shot from tee to hole. 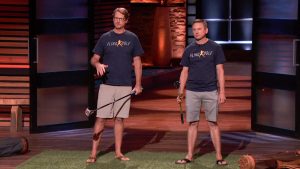 SHARK TANK – A pair of entrepreneurs from Industry, California, pitch their innovative system which helps create a custom pillow based on your unique sleep profile. Two entrepreneurs from Ipswitch, Massachusetts, believe they`ve hit a hole-in-one with their natural and fun alternative to a traditional sport. Entrepreneurs from Plymouth, Michigan, take outdoor dining to another level when they float their grilling product idea by the Sharks, while a husband and wife duo from Boise, Idaho, stretch the boundaries of what it means to wear functional shoes with ease on Shark Tank, FRIDAY, MAY 14 (8:00-9:01 p.m. EDT), on ABC. (ABC)
JOHN PRUELLAGE, ALEX VAN ALEN

From offices at CIWorks in Amesbury, FlingGolf can be played alone, with other FlingGolfers or with traditional golfers. Van Alen and Pruellage asked the sharks for an investment of $300,000 for 10 percent equity in the company. “You never know how they are going to react,” Van Alen said. Their valuation of the company at $3 million put off two sharks, Kevin O’Leary and Lori Greiner. O’Leary, a Massachusetts resident, was also turned off by the new “iteration” of golf. Calling FlingGolf “poopoo on a stick,” O’Leary said country clubs will never allow FlingGolf to be played on their golf courses. Van Alen delighted in telling O’Leary, known as “Mr. Wonderful” on the show, that FlingGolf has been played at the Brookline Country Club, where O’Leary is believed to be a member, and on more than 1,000 other golf courses. “The golf gods are going to strike you dead with that stick,” O’Leary said. To which, Van Alen responded, “We don’t care.”

Last week in an interview with The Town Common, Van Alen was thrilled that his answer to O’Leary made it into the show. The segment is about 8 minutes long, but the actual presentation was edited down from an hour of banter and negotiations between the presenters and the sharks. He said O’Leary was a great foil for the sport. He epitomized the “snooty” world of golf that has fought FlingGolf being played on their courses, Van Alen said. There are about 24 million golfers, but most play between one and five times a year, Van Alen said. In the last decade, more than 1,800 courses have closed, Pruellage told the sharks. “The average golfer gets older every year,” he said. “Young people think it is too expensive, too hard to learn, too many clubs, takes too long, and many find it boring.” Van Alen said FlingGolf is the “antidote to boring.”
Pruellage said the company’s goal is not to convert traditional golfers to FlingGolf, but to persuade them to add the relatively inexpensive FlingStick to their bag of other clubs. “You should try it,” he said. A Wyoming firefight emailed, “Your Shark Tank episode sure sparked my interest as a non-golfer in getting out on the course.” And Eric from Anaheim, CA, wrote, “Absolutely an amazing product. After the third hole on a 9-hole course, I got into my grove and started throwing over 170 yards. So much faster and more enjoyable than traditional golf.” Since the show aired, several golf courses have told the company that they are getting lots of calls from FlingGolfers asking if they can play with a FlingStick on their course. Shark Mark Cuban, owner of the Dallas Mavericks, took himself out, saying he liked the product, but felt they had not sold enough FlingSticks “to get traction.”

That left Robert Herjavec, who described FlingGolf as “lacrosse on a golf course,” and Daniel Lubetzky to compete for an investment with FlingGolf. They both offered to invest the $300,000, but wanted 33 percent ownership. Pruellage tried to persuade the two sharks to make the investment together – a part of the presentation that was edited out. But Herjavec wanted at least 20 percent, which was too much to share. Lubetzky, the owner of Kind Bars, lowered his ask from 30 to 25 percent in exchange for the $300,000 and gave Van Alen and Pruellage five seconds to agree. They agreed after four seconds. Asked why they chose Lubetzky, Van Alen said they felt he was an entrepreneur and would take a more active role in helping them develop FlingGolf. In the months since they shot the show, Van Alen and Pruellage said Lubetzky and his team have been very helpful. Another of Herjavec’s comments that ended up on the editing room floor was his comment that FlingGolf was one of those investments he would later wish he had made. “It was a fantastic experience,” Van Alen said. “It took me two weeks to come down.” Pruellage said it was fun and the hour presentation went by quickly.

All the sharks were having fun, talking over each other, he said. When the show was aired, the edited version made the sharks seem more skeptical about FlingGolf than they were, Pruellage said. “It is the shark tank, not a dolphin pool.” The best result from being on the show is the credibility it brings to FlingGolf, Van Alen said. “People are not sure it’s real,” Pruellage said. “Being on Shark Tank is like having an infomercial. You get opinions from seasoned investors. That kind of credibility is priceless.” 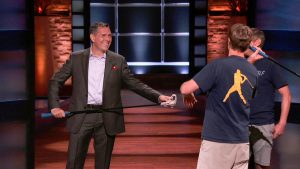 SHARK TANK – A pair of entrepreneurs from Industry, California, pitch their innovative system which helps create a custom pillow based on your unique sleep profile. Two entrepreneurs from Ipswitch, Massachusetts, believe they`ve hit a hole-in-one with their natural and fun alternative to a traditional sport. Entrepreneurs from Plymouth, Michigan, take outdoor dining to another level when they float their grilling product idea by the Sharks, while a husband and wife duo from Boise, Idaho, stretch the boundaries of what it means to wear functional shoes with ease on Shark Tank, FRIDAY, MAY 14 (8:00-9:01 p.m. EDT), on ABC. (ABC)
DANIEL LUBETZKY