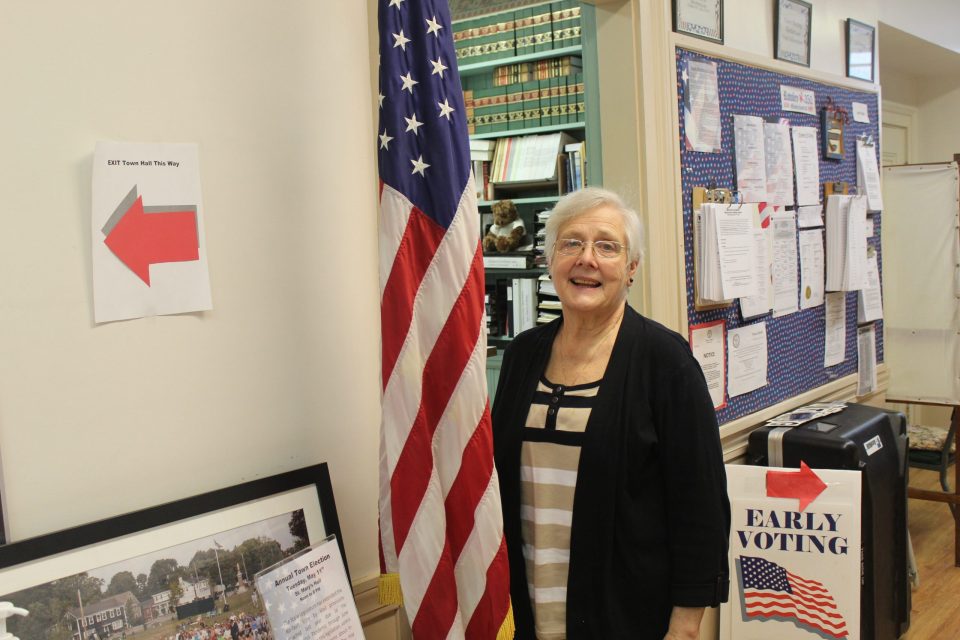 ROWLEY – A pillar that has held up Town Hall in this historic town will be gone next week.

But fear not, Town Clerk Susan Hazen, who is retiring after 21 years, is not going far. She lives across the street from Town Hall.

Last week, Susan, who has an encyclopedic knowledge about Rowley, took notes and helped her friend, town moderator Joan Petersen, run the spring Town Meeting. This week she is administering the Town Election.

Running elections and assisting with Town Meetings are only the most visible activities that keep the energetic clerk on the go all day long.

As the Town Clerk, she is certified by the Massachusetts Town Clerks Assn. to sell dog and shellfish licenses, issue incorporation papers for new businesses, swear in all paid and volunteer employees, including police officers like her son, Sgt. Charles Hazen, and generally keep Town Hall running smoothly.

“It is a wonderful job,” the 71-year-old Hazen said. “You never know what you are going to be asked for next.”

Hazen started working for the town in 1996, leaving a job with a bank to join the office of the town’s treasurer. “Banking is great training for the Town Clerk’s office,” she said. And she admits, “It also helps to be a little OCD (obsessive compulsive.)”

A good example: although she has run as many as four elections in a year for more than two decades, she woke up last week in the middle of the night, worried that she had forgotten to do something for the current town election. Early voting started that morning.

When the previous town clerk retired in 2000, she had been working in the treasurer’s office for four years. She ran for the position, defeating the only opponent she ever had. She has run unopposed in each election since.

“It is a little stressful,” she said about having to run for election. But when she was offered the chance to convert the position to one appointed by the Selectmen, she readily declined. She said she preferred to be accountable to the town voters.

Susan’s favorite part of being Town Clerk is hearing the stories of people coming into her office. She admitted she does not know every resident, but can call most by name, she said. Her 10-year assistant, Sue Leach, who died last year, knew every dog in town.

She confesses to having mixed feelings about retiring. Covid-19 and the national political tensions helped make the choice for her. Other elections have been stressful and challenging, including her first when President George W. Bush narrowly defeated then-Vice President Al Gore, but nothing has compared to running a contested presidential election in the middle of a Pandemic.

Covid did not take a day off for the Massachusetts elections, she said. To keep election workers safe, she spent many hours planning every detail. Because many of the election workers are seniors, about half opted not to work the 2020 election. She had to recruit and train new workers plus add people to clean and sanitize.

She also began to hear complaints from residents questioning if their vote was going to be counted. “If you put it in my hand, it does,” she said she told them.

Others questioned why they had to sign the outside of their drop-off ballot. People thought it was because she wanted to see how they voted. “When you open 2,000 ballots, you don’t care how someone voted,” she said.

“I realized that it was because they were paying attention to the national news,” she said. At that point, she began to question whether she wanted to keep on being Town Clerk.

She considered staying until 2024. But that would have made her successor have to run a presidential election during her first year, which Susan knew hard that was from her own experience. By leaving this year, her assistant, Catie McClenaghan, who is running unopposed to succeed her as the next Town Clerk, will be able to administer several smaller elections before facing the big one in three years.

Asked what her plans are when she leaves on May 18, she said, “I’m not sure what I’m going to do.”

Susan is also president of the Rowley Historical Society, which because of Covid has been dormant for about 18 months. She is looking forward to revitalizing the society, resuming teas and holiday events.

It is not officially part of her job, but because the Town Clerk issues official copies of birth and death certificates, Susan found herself helping track down relatives who might have lived and been buried in the town. She said she relishes genealogy, which seems fitting in a town founded in 1639. Her husband’s family traces its history to Rowley in 1649.

She was Town Clerk when Hollywood came to town, using Rowley as a stand in for Edgartown, during the filming of the Netflix series, Chappaquiddick.

One of her favorite memories was heading the parade committee for Rowley’s 375th anniversary celebration. She volunteered for the assignment. “I’ve always loved parades,” she said.

It was a learning experience. “When you put on a parade every 25 years, its hard to get good at it,” she said, admitting the committee had to ask Newburyport for advice.

Born in Salem, Susan grew up in Danvers and graduated from Danvers High School. She met her husband, Charlie Hazen, and they settled first in Ipswich, then in Rowley. Charlie retired two years ago and is looking forward to having Susan at home more, she said. Their children, Sgt. Hazen and daughter, Elizabeth Morris, a Triton Middle School math and science teacher, have given them two grandchildren each.

“That’s what I will doing on Fridays,” she said. And if Town Hall needs her, she’s only a short commute away.