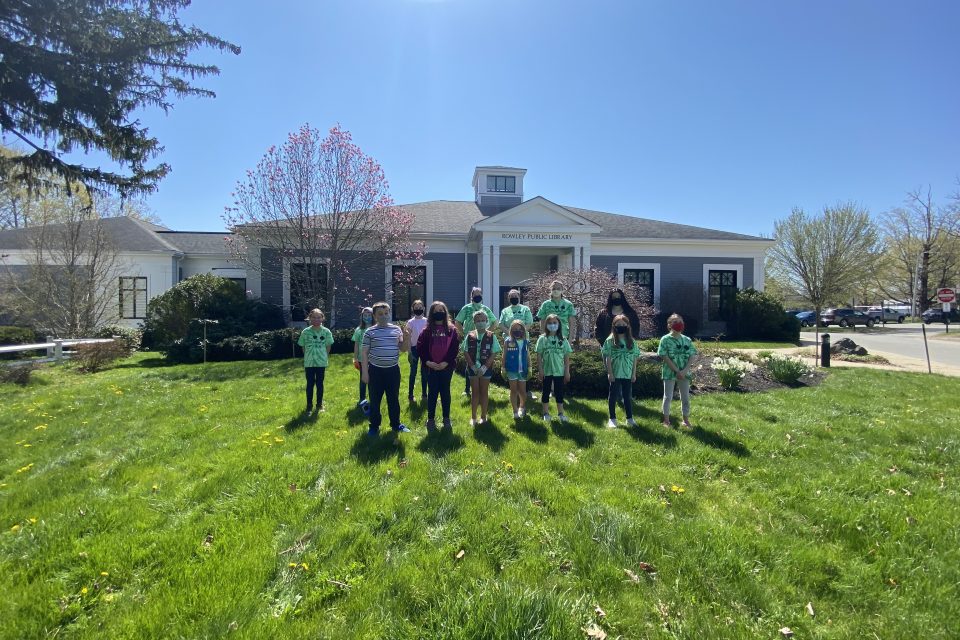 The Annual Library Clean-up started in 2011 as a thank you to the library staff for letting Troop 75124 have their meetings at the library. The troop was composed of kindergarten-aged girls and run by Jane White, a long-time Rowley troop leader. Jane’s troop of now tenth-grade girls has led and participated in the annual tradition of cleaning the gardens at the Rowley Public Library for the past ten years, except for last year due to COVID-19, and began inviting other Rowley troops to participate in 2012.

The Girl Scouts support the community in several programs throughout the year. In October, Rowley Girl Scout troops carved and decorated pumpkins and lined the stone wall of Sea View Retreat in Rowley to raise the seniors’ spirits who live at the property.

This past December, due to COVID-19, they organized a “pandemic pivot,” in the form of a holiday car parade celebrating the annual lighting of the Town Common in place of the traditional lighting of the Town Common to provide safe outdoor holiday cheer for the community. They also hosted the first-ever Girl Scout Festival of Trees. The troops individually decorated a tree of their own in themes including Christmas Traditions Around the World, Merry “Meme” mas, Decorated by Nature, Colorful Christmas Cheer, Shiny, and Bright and Recycled Christmas. In all, there were twelve uniquely decorated trees, and the Girl Scouts arranged donations of the trees to residents after the event was over.

“Rowley’s Girl Scouts have a long tradition of community service. I’m thrilled that we’ve been able to keep this project going for so many years. It’s great to see the younger Scouts learning from, the older girls.” Said troop leader Jane White.

Next Saturday, May 1, 2021, after the Cub Scouts Pinewood Derby, the Girl Scouts will participate in their third annual Pinewood Derby on the Town Common racing derby cars in three divisions, Best Food-Themed Car, Most Humorous Design, and Best Car with Driver Design. The Cub Scout’s races will begin at 9 AM and end at approximately 10:30 AM. The Girl Scout’s races will begin at 11:30 AM and commence at approximately 3:30 PM.