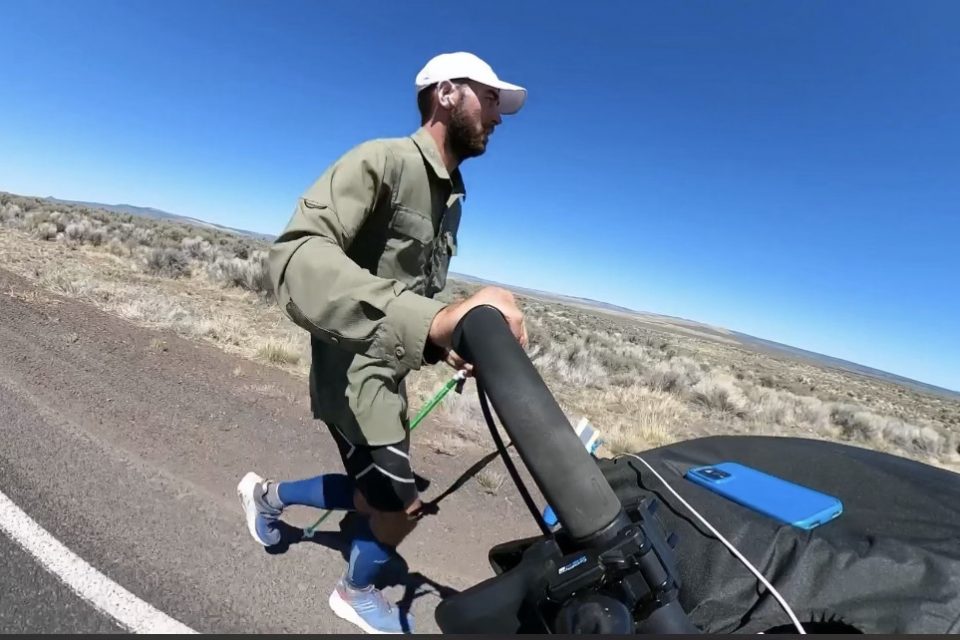 THE OREGON BADLANDS – Mike Wilson took off running last Thursday on his 3,000-mile journey across the country to raise money for his favorite charity, Lucy’s Bus in Amesbury. After a false start from Santa Monica, CA, that led him on a route across the desert, Mike took a bus to Bend, OR, where he replaced a flat tire on his running stroller that carries all his food and gear.

He hopes the more northern route back to New England will be cooler, but requires him to run at a higher elevation and over several mountain ranges, including the Tetons.

When The Town Common caught up with him, he was running through the Oregon Badlands Wilderness, almost 30,000 acres of wilderness and volcanoes managed by the federal Bureau of Land Management. He was approaching the town of Brothers, OR, where he might restock his provisions at the Brothers Stage Stop.

The first day he made 27 miles, as he nursed a sore ankle with massage and exercises. Mike hopes to make 40 miles per day, as he contends with the wind kicked up by 18-wheelers racing beside him on U.S. Rte. 20.

“The wind almost blows the stroller over,” he said.

He spent one night sleeping in a bike park nestled between two jumps. “That was pretty weird,” he said.

The variety of calamities that befell him at the start in California, which included a wrecked car that burned all his equipment, was almost overwhelming, he said. But the 28-year-old personal trainer remains positive.

“No matter what it takes, I will get this done,” he said. That is how much he cares about Lucy’s Bus.

The shirts can be purchased for $20 at lucyslovebus.org/mikesrun. The MaxLove Project is a California-based program like Lucy’s Love Bus.

Mike plans to finish his run on the waterfront of Newburyport in about 80 days. Pick up The Town Common each week to follow Mike’s progress across America.

In addition to the Portsmouth Planet Fitness, sponsors include True North Ale Co. in Ipswich, Wire By Ryan in Byfield, Marge Bar and The Juicery in Newburyport and Vincent Bianco Custom Catering in Peabody.