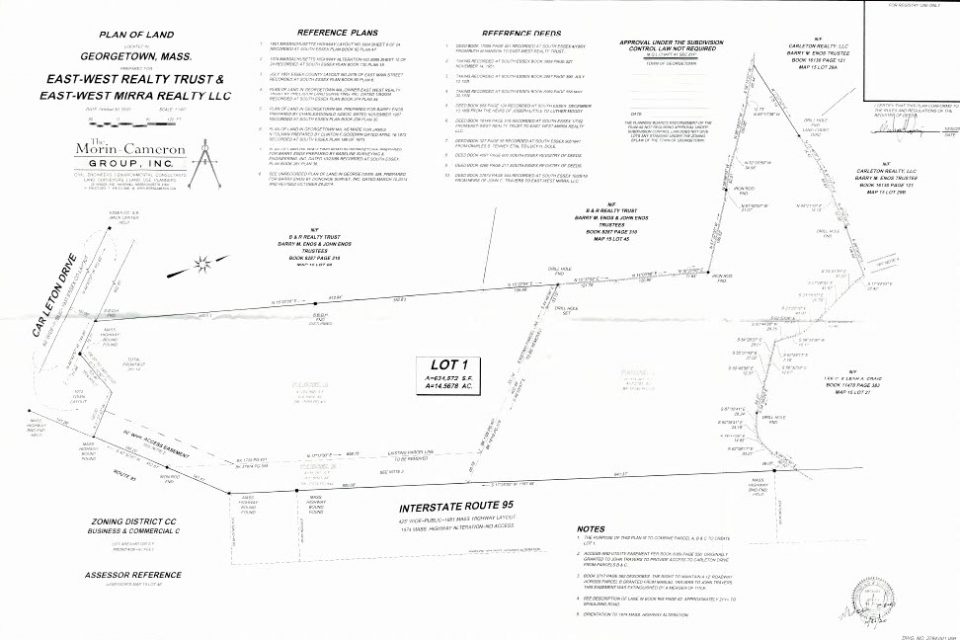 GEORGETOWN – Attorney General Maura Healey ruled on April 15 that the town of Georgetown can limit the size of a trash transfer station to 50 tons a day, but it may not affect the proposal by G. Mello Disposal Corp. to build a transfer station capable of handling 500 tons a day.

Town Planner John Cashell said at a public hearing before the Planning Board last week that the town cannot change the rules in the middle of the game.

The 50-ton bylaw, approved last November at a Town Meeting, and a proposed second bylaw that redefines the size of future transfer stations were approved before Mello applied for approval of its 500-ton/per day transfer station.

“However, the Town may not apply the by-law to prohibit the construction or expansion of a solid waste disposal facility, as defined by G.L. c. 111, § 150A in the Town’s industrial zones, because such a prohibition would conflict with G.L. c. 40A, § 9,” the ruling stated.

The land along Carleton Drive, near Interstate 95 and state Rte. 133, is a patchwork of three different zoning districts, including commercial and industrial. The site of the proposed 500-ton transfer station on vacant land at the end of the drive appears to be in a commercial zone, not an industrial one.

“In addition, the Town may not apply the by-law in a manner that would otherwise interfere with the broad regulatory authority of the Massachusetts Department of Environmental Protection (DEP),” the attorney general’s ruling stated.

The Conservation Commission (ConCom), which is an arm of the DEP, is reviewing the Mello proposal, along with other town boards. As part of its review, the ConCom is conducting a study to determine if the proposed transfer station would negatively impact wildlife on the site.

The Zoning Board of Appeals is also trying to determine if the town should require the Mello project to undergo a Major Development Review. If so, the Planning Board would require Mello to pay for an independent impact study on neighbors and the town its project would have.

Mike Birmingham, an opponent of the Mello project, said at the Planning Board meeting last week that if Mello is required to undergo a major development review by the Planning Board, it might have to start over and refile its request for permits. In that case, Birmingham reasoned, the limit of 50-tons per day under this bylaw could limit the size of the project.

Cashell predicted last week that this project, no matter what the Planning Board, Zoning Board, ConCom and Board of Health decides, will be subject to a lot of litigation. “It may end up before the Supreme Court,” he said.

Healey in her opinion handed off the controversy. She wrote: “The Attorney General does not review the policy arguments for or against an enactment.” Nor did she “comment on the wisdom of the town’s by-law.”

Her opinion continued, “Rather, in order to disapprove a by-law (or any portion thereof), the Attorney General must cite an inconsistency between the by-law and the state Constitution or laws.”

During its review of Article 12, the attorney general received correspondence, “urging our Office to disapprove Article 12 on the basis that the siting, construction and operation of solid waste facilities is assertedly comprehensively regulated by G.L c. 40A, § 9 and c. 111, §§ 150 and 150A and the regulations promulgated under those statutes.”

“We appreciate this input as it has informed our review of the by-law and emphasized the importance of the issues at stake,” the opinion continued. “Based on our standard of review, we have determined that the arguments in opposition do not provide grounds for us to disapprove Article 12. However, we strongly encourage the Town to consult closely with Town Counsel regarding the application of the by-law.”

The Planning Board meets again at 7 p.m. on April 28 to review the traffic impact study at Carleton Drive.