Why Writers and Readers Love the Newburyport Literary Festival 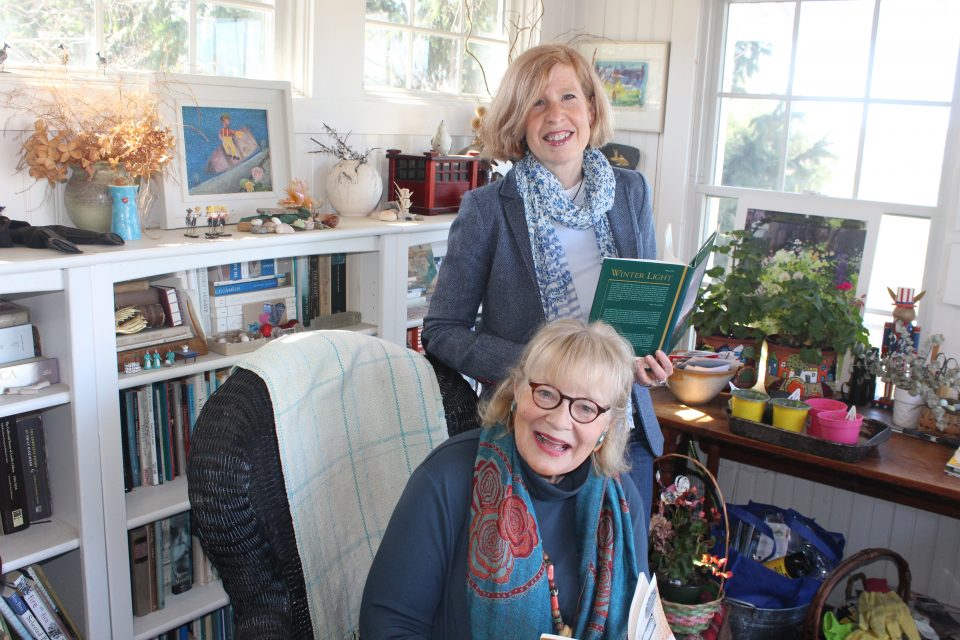 NEWBURYPORT – Crowds of book lovers will not roam the streets of this old seaport again this spring looking for their favorite or soon-to-be favorite authors and poets at the Newburyport Literary Festival.

But that does not mean that the beloved and resilient festival is not going to bring its collection of writers, poets and storytellers to town. Just not in person. They will be streamed live, featuring authors from New England to Oregon to Merry Ole England.

The 16th annual festival will be the largest ever with more than 100 authors and poets. It will feature poetry, but will have a stellar lineup of fiction and non-fiction writers, local historians and writers of young adult books.

“We’re extremely excited about our line-up of authors, from Ann Patchett, who will participate from her home in Tennessee, and Kim Johnson, who will ring in from Oregon, to Ruth Ware, Elly Griffiths and Dorothy Koomson, who will all join from the United Kingdom,” wrote the festival.

As exciting as the festival is for those who come to participate, ever wonder what the authors themselves think of the annual event? The Town Common Newspaper did, so we asked a few North Shore writers.

“This festival is one of the most magical of its kind, with book people taking over the quaintest of seaports to talk about all things literary. Now, as we go virtual, those same people will bring that same magic to the cybersphere,” wrote Alena Dillon, author of Mercy House and The Happiest Girl in the World.

Andre Dubus, author of The Cage Keeper and Other Stories, Bluesman, House of Sand and Fog, The Garden of Last Days and his memoir, Townie, wrote, “Leo Tolstoy said that ‘Art is transferring feeling from one heart to another.’ We’re living through difficult times in many ways, and I cannot think of a more essential time to take part in the community-building, soul-nourishing, and eye and heart-opening enterprise that is the Newburyport Literary Festival and its celebration of readers, writers, and books!”

Meg Mitchell Moore, author of The Arrivals, So Far Away, The Admissions, The Captain’s Daughter and The Islanders, wrote, “When my debut novel came out in 2011, I did my very first reading ever as part of that year’s literary festival. I was so scared my knees were knocking together.

“The festival has been part of my life ever since, both as an always welcoming home for my own work as well as a fabulous opportunity to meet other authors in so many different genres. Now, as a member of the steering committee, I can say I truly recognize the work and dedication that goes into putting this event on. I’m proud to live in this vibrant community that has been able to keep the festival going and thriving through the pandemic, and I can’t wait to see where we go from here.”

Holly Robinson writes novels, essays, and articles under her own name and works “behind the curtain” as a ghostwriter and developmental editor, taking books from the brainstorming stage to a completed manuscript. Her novels include Folly Cove, Chance Harbor, Haven Lake, Beach Plum Island, Wishing Hill, Sleeping Tigers and Gerbil Farmer’s Daughter.

“It isn’t often that writers and book lovers have an opportunity to gather and talk about authors, books and the craft of writing with the same excitement people discuss, say, the latest episode of a binge-worthy TV show, but the Newburyport Literary Festival gives us that chance every year,” Robinson wrote.

“The Festival draws literary heavyweights; sponsors panels about publishing for aspiring writers; and hosts poetry readings and book launches for debut novelists. In addition to attracting new tourists to town, the Festival is a clear statement of Newburyport’s enthusiastic support of writers and artists,” she wrote.

Bethany Groff Dorau, the author of A Newburyport Marine in World War I: The Life and Legacy of Eben Bradbury, and a Brief History of Old Newbury, wrote: “The Newburyport Literary Festival gives me contacts, networks, mentors, support, inspiration, and so much more. The community that has formed around this event means a great deal to me. I get to be an author among authors for a weekend, and I get to spend the rest of the year planning the next one with my friends.”

Dyke Hendrickson, the author of Nautical Newburyport: A History of Captains, Clipper Ships and the Coast Guard, New England Coast Guard Stories: Remarkable Mariners and the just released Merrimack: The Resilient River, has been active at the festival as an author and as a moderator.

“As an author, I liked talking about the book I had just finished, and I enjoyed meeting readers who attended my presentations,” Hendrickson wrote.

“As a moderator, I was thrilled to be on stage at the Firehouse several years ago to interview Sen. George Mitchell. He was talking about his new book, The Negotiator. He provided many insights about international negotiation. Our daughter, Leslie, had been a page for him in the U.S. Senate, and it was good to connect with him again. The Festival has brought many fine writers and historians to Newburyport,” he wrote.

Vicki Hendrickson, who with Jennifer Entwistle leads the festival each year, said she gets letters from people across New England, telling her how grateful they are. “It makes them feel connected even when it is not in person,” she said. 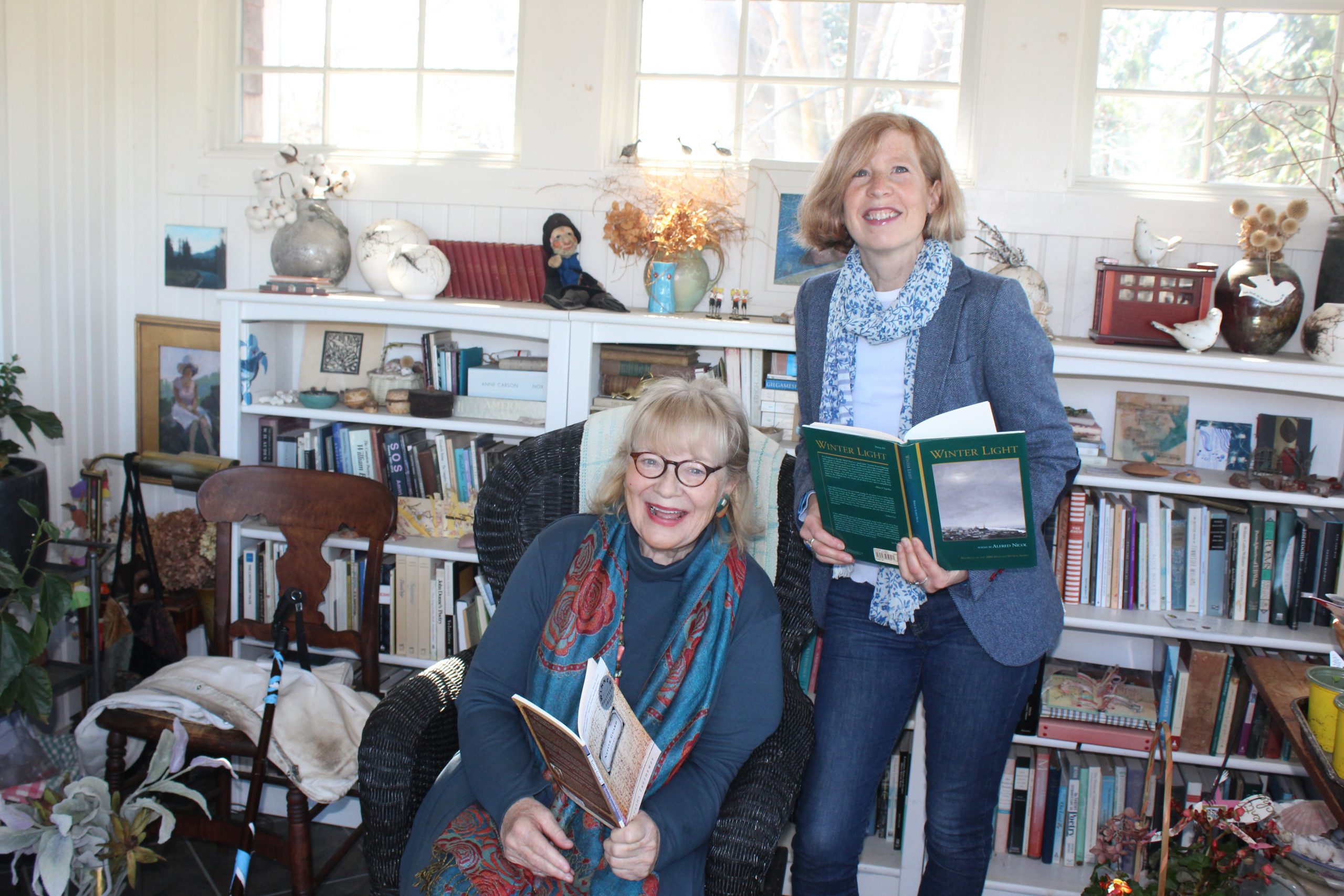 The festival has found there is an advantage to being remote. The audience is worldwide on the Internet, and several poets and authors have not participated in past festivals because they do not or could not travel to New England. Ann Paggett, who has published eight novels and a children’s book, will be a presenter this year from Nashville, TN.

In non-Covid years, the festival schedules events from Friday night through Saturday breakfast and then in 10 venues around the city for authors and poets, ending with a not-to-be-missed Saturday night event.

This year’s festival kicks off at 6 p.m. Friday night with an event honoring all poets, but especially Deborah Warren and her poem Glassblower. She will be interviewed by fellow poet Ernest Hillbert.

“Unfortunately, digital coffee and pastry are a poor substitute for what Gina usually provides us,” the festival lamented. But the poetry, it said, will be of top quality.

At 7 p.m. Saturday, the festival has scheduled the performance of a melopoeia, a combination of music and poetry that will feature poets Rhina Espaillat and Alfred Nicol, guitarist John Tavano and cellist Roger Kimball.

For the first time, the festival will also hold Sunday events, starting at 9 a.m. and concluding at 5 p.m.

Sessions on both days will be approximately 45 minutes to an hour, including time for questions and answers. The festival is free, but participants must register for each event by visiting: newburyportliteraryfestival.org.

The festival is widely supported by companies, public agencies and individuals, but the original founders and supporters were the Newburyport Bank and the Institution for Savings.