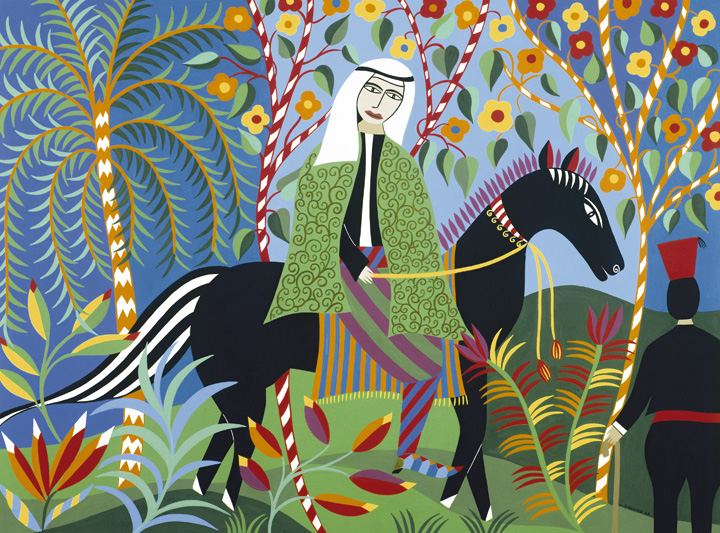 NEWBURYPORT — The PEG Center for Art & Activism is hosting a new exhibition that features a group of strong, diverse, international women artists who share their perceptions and place in the world. “Women Hold Up Half the Sky” opens on Sept. 24 and will be displayed through October 29 at 3 Harris Street in Newburyport.

There will be a special free event on Thursday, October 6 from 6-8 p.m. It will include an artist reception and speaking program featuring the artists. The public is invited to attend in person or participate online at https://us02web.zoom.us/j/88467267127.

“From the aging of feminine bodies to intricate imagery of stories from her family’s beginnings in Lebanon, to a vast and interactive mural about growing up with an American mother and Indian father, to an intricate series of paintings depicting the inner experience of being a Colombian immigrant, this is an exhibition of and by women, whose voices are raised in exploration about roles, choices and determination. ‘Women Hold Up Half the Sky’ is a personal statement, a personal journey for each of these five consummate artists: Angela Alés, Mary Hart, Patricia Miranda, Sarina Khan Reddy, and Helen Zughaib and it expresses the mission of the PEG Center – to elevate the voices of the marginalized in order to further human rights,” said PEG Center Executive Director Paula Estey. “

The exhibition title was drawn from a Chinese saying that Mao Zedong used to rally women to join the labor force, saying “Whatever men comrades can accomplish, women comrades can, too” and proclaiming that “Women hold up half the sky.”

“Given the current situation in the nation, we must all work together to ensure that all citizens of every culture are represented and respected. Women comprise half the population; those who rely on traditional gender roles may occasionally forget this. ‘Women Hold Up Half the Sky’ is a potent reminder,” Estey added. 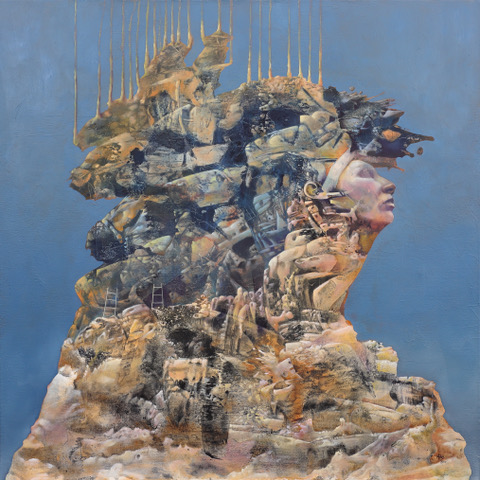 Photo Provided By The PEG Center for Art & Activism. Kali by Angele Ales

of recording this search. Recurring symbols and icons have solidified into her personal language. Her socio-political experiences as a Latin American, immigrant, and female artist have coalesced as a central theme of her artistic voice. Alés’ style is a marriage between Magic Realism and Surrealism, accessing material from the unconscious mind.

• Mary Hart – Hart is a painter and printmaker from southern Maine. Born and raised in Connecticut, she moved to Maine in the 1980’s to teach and paint in the Western Mountains region. She now lives and works in Portland, ME. Hart earned her BA in Art and English from Dartmouth College, and her MFA from the Milton Avery Graduate School of the Arts at Bard College where she was the recipient of the Elaine de Kooning scholarship in painting. Dealing with issues of growth, damage, struggle and beauty, Hart’s work links the natural world with an inner narrative. Her small, sometimes miniature paintings and prints are intensely focused and detailed. Their larger purpose is the formation of visual associations that describe the artist’s place in the world and her emotional response to it.

• Patricia Miranda — Miranda is an artist, curator, and educator. She is founder of The Crit Lab graduate-level critical seminars for artists, and MAPSpace project space and residency program. Her work is grounded in historic material practices, rituals of grief and mourning, and textile as an intimate form that wraps our bodies from birth to death. She works with donated repurposed lace and linens in site-responsive sculptures and installations. The accumulated textiles reflect the hidden labor of care, alongside the economic labor, in the domestic and work lives of women. Notions of mending, remembering, collecting 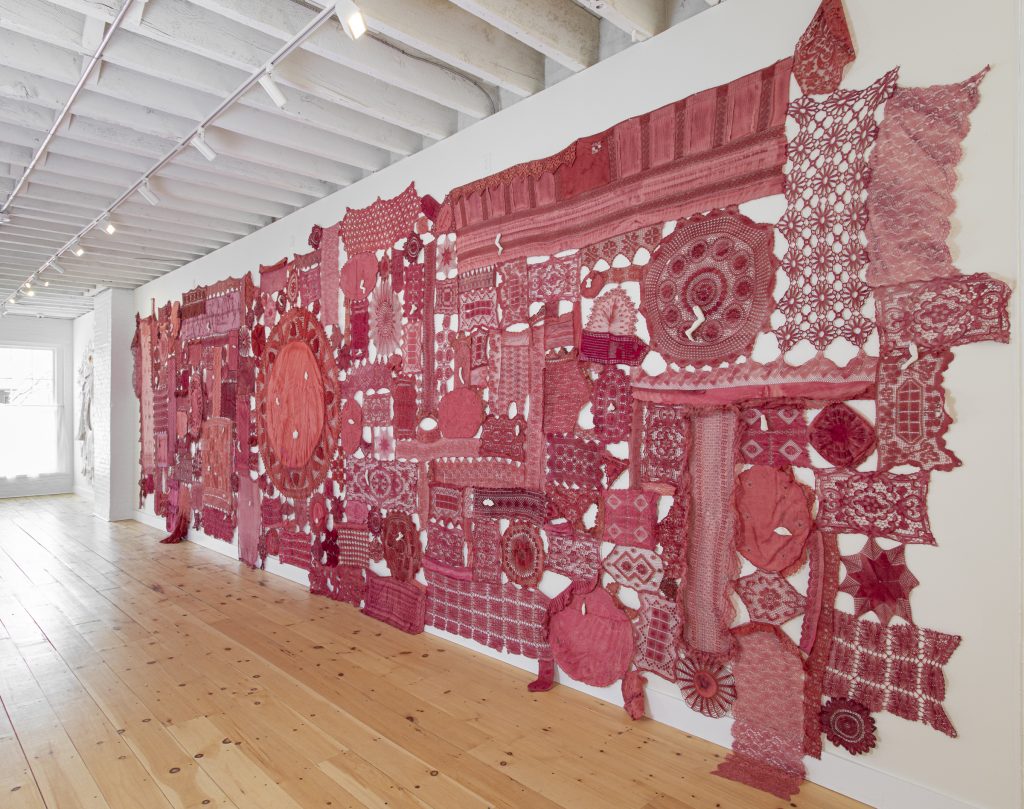 and preserving are present in each action and each work. The lace is alternately hand-dyed and sewn into shroud-like tapestries and installations, layered with objects of lamentation akin to ex-votos, reliquaries, and other ritualized forms traditionally offered to saints. The repurposed bio-degradable materials allow for monumental site-responsive works with a small ecological footprint.

• Sarina Khan Reddy – Khan Reddy’s video, photo, print and installation work explores the differences within her cultural identity as an Islamic-American woman. Through the lens of her Indian heritage, she explores the new colonization embodied in globalization. She focuses on how the economic system is reflected in all social formations and how war and militarization are fueled by corporate globalization. In her video work, she explores the blurred boundaries between news and entertainment. She uses appropriated footage from advertising, news, and Hollywood movies. She juxtaposes these sources to subvert the original meaning to create new and alternative histories.

• Helen Zughaib – Zughaib was born in Beirut, Lebanon, living mostly in the Middle East and Europe before coming to the United States to study art at Syracuse University, earning her BFA from the College of Visual and Performing Arts. She currently lives and works in Washington, DC, as an artist. She paints primarily in gouache and ink on board and canvas. More recently, she has worked with wood,

Photo Provided By The PEG Center for Art & Activism. Charity and Compassion by Helen Zughai

shoes, and cloth in mixed media installations. Her work has been widely exhibited in galleries and museums and jer paintings are included in many private and public collections, including the White House, World Bank, Library of Congress, US Consulate General, Vancouver, Canada, American Embassy in Baghdad, Iraq, the Arab American National Museum in Detroit, Michigan, and the Minneapolis Institute of Art. As an Arab American, she encourages dialogue, understanding and acceptance between the people of the Arab world and the West, especially since 9/11, the wars in Iraq, Afghanistan, and the recent revolutions and crises in the Arab world. Zughaib’s work is ultimately about creating empathy and creating a shared space for introspection and dialogue

The mission of the PEG Center for Art & Activism is to provide clients and visitors with the transcendent beauty of contemporary art and to be a catalyst for conscious change. Paula Estey can be reached at 978-376-4746 or info@thepegcenter.org.