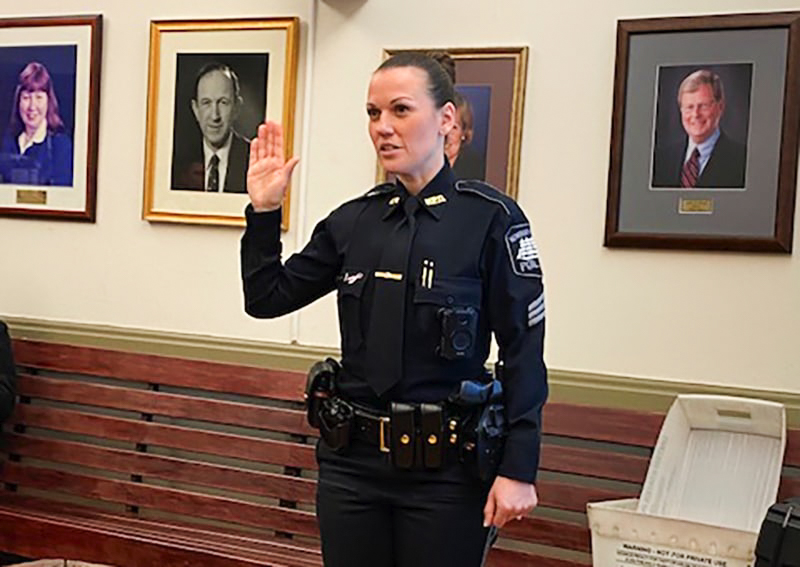 NEWBURYPORT — Sgt. Megan Tierney was promoted recently .Sgt. Tierney began her career with the Newburyport Police Department as a dispatcher in 2010, and became a sworn police officer in 2012. She was assigned as a school resource officer from 2016 to 2020.

Tierney earned a Bachelor of Science in Criminal Justice from UMass Lowell in 2007, and then attended the reserve police academy and worked as a reserve officer and dispatcher for the Newbury Police Department until she joined Newburyport Police. Tierney has also completed the Massachusetts Municipal Training Committee’s Reading Police Academy.

In 2019, she was a recipient of the Newburyport Rotary Club’s Paul Harris Fellow Award for being an Unsung Hero. The honor was bestowed in recognition of Sgt. Tierney’s participation in an international police training program that was hosted by the Rotary Club in 2019. The honor also recognized Sgt. Tierney’s work as a sexual assault investigator, and that she is a breast cancer survivor who has participated in major fundraisers for cancer research.

While she was assigned as a School Resource Officer, then-Patrolman Tierney and officers from three other local departments traveled to the United Kingdom with the Rotary Club and participated in training courses and meetings with law enforcement officers in the U.K. The program allowed officers to share their expertise and knowledge on topics like community-based justice, mental health first aid, school security, substance use prevention and threat assessment.

Sgt. Tierney’s first assignment will be working as a patrol supervisor on the 4 p.m. to midnight and midnight to 8 a.m. shifts.

“I want to congratulate Sgt. Tierney on this well-earned promotion,” said Marshal Mark Murray. “She is a credit to the Newburyport Police Department and an engaged member of our community who has and will continue to set a great example.”