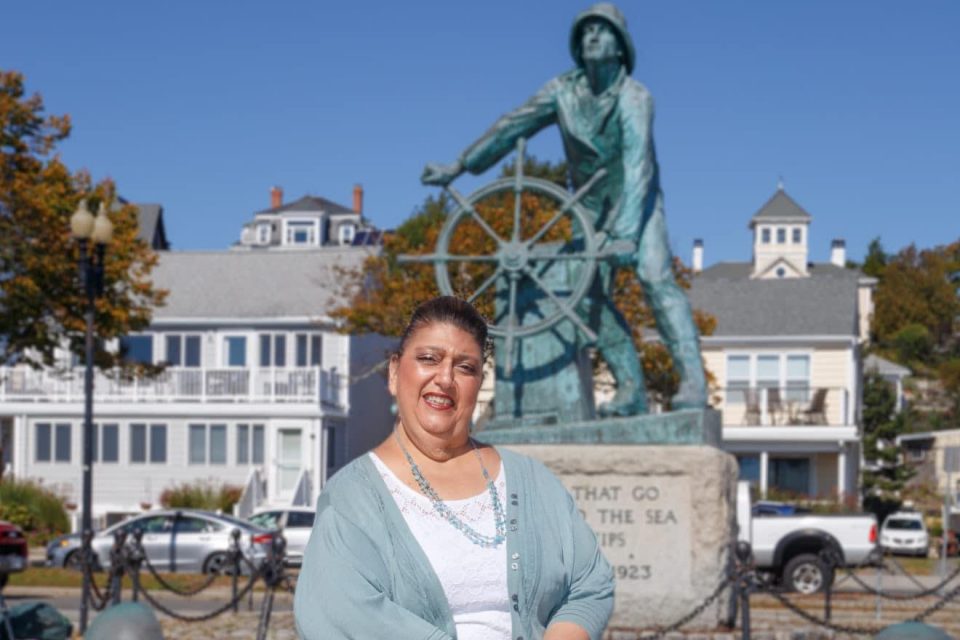 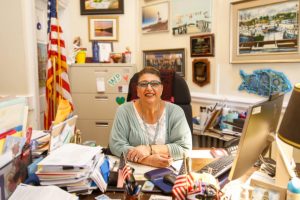 Photos Courtesy City of Gloucester. Mayor Sefatia Romeo Theken is proud of Gloucester’s accomplishments during her tenure as mayor: “The City is in a great place.”

GLOUCESTER – As her time in the corner office draws to a close, Mayor Sefatia Romeo Theken is reflecting on the City’s successes and focusing on the people and organizations that exemplify the spirit of public service. With the successes came a series of challenges, none greater than ensuring the community’s safety during the COVID-19 pandemic. “No one knew about COVID-19 two years ago. We had to fight this as a team. And your team is your community,” Mayor Theken says. That meant ensuring that the City’s homeless population had safe and secure shelters; that vulnerable senior citizens, especially those in care facilities, were protected; that children who could not attend classes in-person still had access to school meals; that residents had access to basic goods; and that local service businesses remained open. “There always will be losses, though one is too many. But it could have been a lot worse. People in the City government and all over Gloucester stepped up,” Theken adds, citing significant support from Gov. Charlie Baker and Lt. Gov. Karyn Polito. “The Governor and Lieutenant Governor showed outstanding leadership.”

Theken joined the City Council in 2001, serving as Council Vice President for several terms. She was chosen as Interim Mayor by the Council in 2015, when the then-Mayor accepted a job in the Baker Administration. Mayor Theken said she originally planned to hold the interim role for a year. Within her first days as the city’s leader, she held a staff meeting and workshop for key City employees on a cruise ship that pulled out to sea in order to hold the attention of the audience. “I said, ‘I want you to bring back the dreaming that you had when you applied for this job. The dreams that you had when you first were interviewed,’”. That workshop became the catalyst for change, improving morale and allowing departments to innovate and grow, thus better serving the Gloucester community. 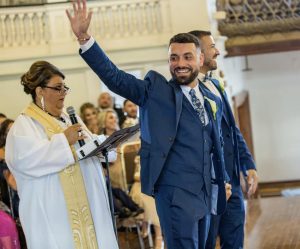 Theken notes her efforts toward creating a more inclusive City Hall, encouraging departments to hire new employees with diversity and equity in mind. Early in her interim term, she purchased a flagpole. The LGBTQ flag was the first to be raised, signaling an era of government access for all. She is proud about creating a government that looks more like the people it serves, for officiating over the first same-sex marriage in City Hall, and of creation of a Human Rights Commission to serve overlooked and underserved groups in the City. “Everyone has the right to be proud of who they are,” she says. Under her leadership, Gloucester became an international model of response to the opioid epidemic which has given rise to a dramatic increase in overdose deaths across the globe. Mayor Theken becomes emotional when telling the story of an acquaintance who was attempting to quit substance misuse on their own because no treatment beds were available. The acquaintance struggled toward sobriety while knowing a relapse could mean death. “He came to us for help, told us what was going to happen if he didn’t get that help,” Theken says, adding that an array of City agencies attempted to find a bed in treatment without success. “Sure enough, we got that call. “I didn’t want to take any more of those calls,” she says. Working with the Gloucester Police Department, the City created a blueprint, connecting those who wish for help with a treatment program, pairing them with a volunteer to assist in their recovery, and working with local businesses to offer job opportunities. In its first 12 months, 376 people sought assistance 429 times from the Gloucester Angel Initiative, and received the help they needed nearly 95 percent of the time. Drug-related crime and property crimes often associated with drug addiction dropped in Gloucester by nearly 30 percent as a secondary result. The work of the Angel Initiative has been highlighted by both the Obama and Trump administrations. Its goals are now national. Its successor, the Police Assisted Addiction Recovery Initiative, is a national network of nearly 600 police departments in 34 states that are committed to non-arrest or early diversion programs that reach people before they enter the criminal justice system. It started in Gloucester. 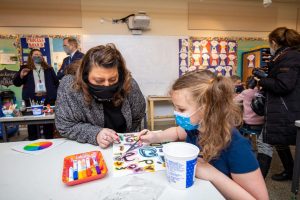 Mayor Theken, whose father was a fisherman and who has owned a fishing boat, has been a strong supporter of the City’s fishing industry. The City now showcases seafood opportunities at regional and national food trade shows. In 2017, Mayor Theken launched “Gloucester Fresh,” which promotes sustainable seafood and the local restaurants that serve it. More recently, Theken launched BioGloucester, which is attracting the life sciences industry and expanding the local economy. Theken credits much of the City’s success to its partnerships, and the willingness of people to come together toward a common goal. She says the City has support of its State House leaders, Sen. Bruce Tarr and Rep. Ann-Marie Ferrante, and great relationships with Gov. Baker and Lt. Gov. Polito. North Shore mayors also work together, and collaborate with time and resources. Before leaving office, Mayor Theken submitted to the state a long list of requests for funding through the American Rescue Plan Act, including road repairs and treatment plant upgrades. High on that list are new public-safety facilities for the Gloucester Police and Fire Departments. “I really want to thank our police officers and firefighters. They haven’t said one word about the conditions they work in. They put the residents first.” Mayor Theken worked as community health and human services liaison at Addison Gilbert Hospital until becoming mayor. She intends to return to the private sector, to a health and human services business she placed on hold while serving as mayor. She is confident that she has left the city poised for future success when Mayor-Elect Greg Verga takes the oath of office on Jan. 5. “The City is in a great place. We’re financially sound,” she says. “The new mayor has the opportunity to come in and finish the things we could not finish. I’m here to help. He will succeed if he takes it one step at a time.”