A beloved farmer and colleague is remembered at the Topsfield Fair 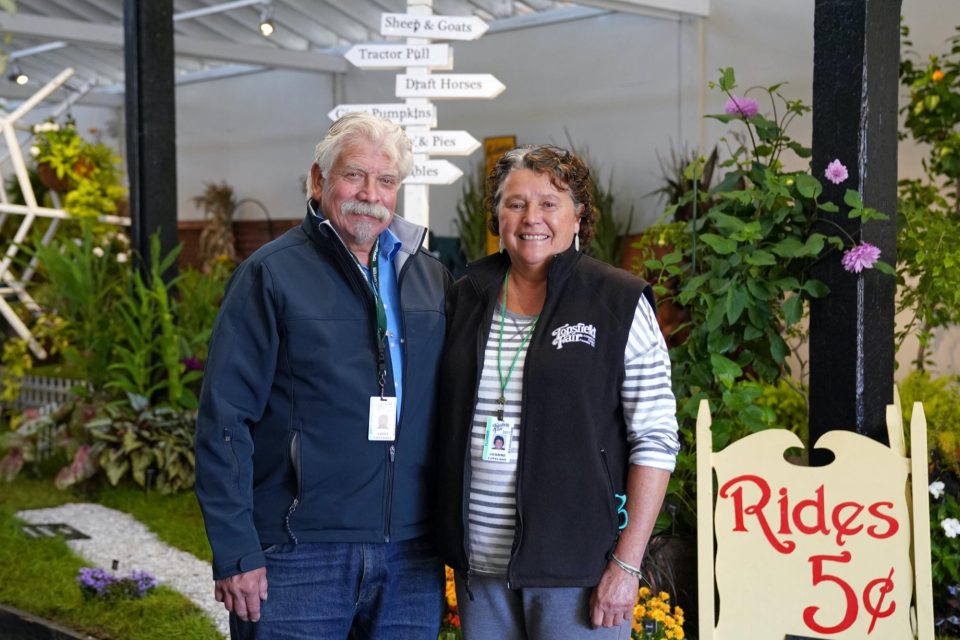 Luigi Costanza and JoAnne Copeland at the Flower Department at the Topsfield Fair. Photo by Bob Carbone

TOPSFIELD — When Lee H. “Peter” Gibney, Superintendent of the Flower Building at the Topsfield Fair, passed away in 2020 at the age of 77 after a six-month battle with cancer, he left some big shoes to fill.

For his successor at the Topsfield Fair, Luigi Costanza and co-chair JoAnne Copeland of the Flower Department, the typical day starts before 7 a.m., when they water all the landscaping designs. Later, they’ll attend a meeting for department heads at the fair and monitor the displays while people come and go, ensuring that they aren’t walked or sat on. Visitors to this year’s busy Flower Show may have also passed a memorial decorated in Gibney’s honor, surrounded by mums and other flowers.

“We can’t replace him, we do our best. It’s teamwork,” said Costanza of the ongoing maintenance of the department. Costanza called Gibney, a founder of Gibney Gardens in Danvers, “A very generous farmer. He’s looking down, chuckling with us, going through things with us.”

Since it was announced that the Topsfield Fair would resume in 2021 after an interruption due to Covid-19, Copeland and Costanza have been working to contact landscapers and let them know that the fair is on. Costanza said there have been some difficulties getting landscapers to commit, mainly related to staffing shortages. In the end, however, everything came together. “Jo and I are very proud of this year. We’ve gotten a lot of compliments,” said Costanza, who clarified that part of the success is the addition of more displays to the show. “To see it nightly progress, and it blossomed.”

Costanza, a lifelong Topsfield resident and Copeland, of Hamilton, each have their own favorite aspects of working at the fair.

“I think for me, I’ve learned more about people. About different kinds of people and getting along with everybody,” said Copeland.

Costanza, for his turn, has been fascinated by questions like, what makes a dahlia so beautiful? To the eyes of most people, each flower is beautiful, but there are little differences that make some entries stand out to a judge. There can be no defects, droppings, or black marks, for instance, and the leaf cannot turn a certain way.

His favorite plants, Costanza said, are mums, a flower associated by some cultures with remembrance. “It’s the colors of the fall. Makes everything more beautiful.”

Both Copeland and Costanza agreed that while the number of farms in Essex County is decreasing, the agriculture component is still a huge part of the Topsfield Fair.

Inevitably, the conversation took a nostalgic turn back to Gibney as the two recollected their favorite stories about their colleague.

“I never saw the man mad. Was always jolly, happy. And he ran his farm right alongside this. He’s sorely missed by us all,” said Copeland. “We’re kind of humbled by following in his footsteps. We’ll never be able to fill them, even with two of us. He was just a good man.”

“He wouldn’t get nervous about it, he was very even-keeled,” said Copeland. “There have been times we’ve been here til midnight helping him build. He had a lot of stories. Sometimes on cold nights, stormy nights, we’d sit back here to get warm. He had so many great stories about farming.”

There was one last piece of information that both Copeland and Costanza wanted to state about the Flower Department; one that Gibney always made clear as well.