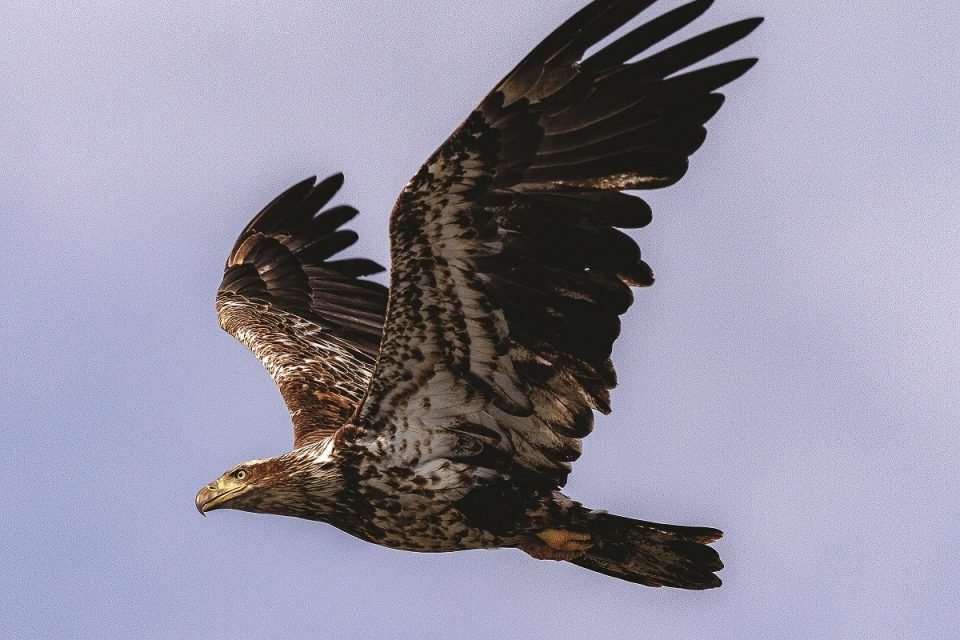 Officials from MassWildlife and wildlife veterinarians from Tufts Wildlife Clinic at Cummings Veterinary Medical Center at Tufts University confirmed that in late July, a young bald eagle succumbed to second-generation anticoagulant rodenticide (SGAR) poisoning. In late July, a female fledgling eaglet in obvious distress on the ground in Middlesex County was transported to and admitted by Tufts Wildlife Clinic in North Grafton. Unfortunately, upon admission to the clinic, the young bird died. A necropsy was performed at the clinic and liver tissue was sent to a lab for toxicology testing. Both the observations from the necropsy and toxicology test results confirmed that the eaglet’s cause of death was due to lethal levels of anticoagulant rodenticides. This is the second documented rodenticide death of an eagle in Massachusetts. The first was an adult bird that died this past March. Over 80 pairs of bald eagles nest in Massachusetts.

Anticoagulant rodenticides are a type of rodent poison that kills by preventing blood from clotting normally, resulting in fatal internal hemorrhage or bleeding. Wildlife can be poisoned by anticoagulant rodenticides in two ways: 1) primary poisoning when an animal directly eats the bait and dies several days later, or 2) secondary poisoning when a predator or scavenger eats prey that has consumed the bait. Studies of birds of prey in Massachusetts conducted at Tufts Wildlife Clinic have shown widespread exposure to SGARs. While bald eagles primarily eat fish, they are opportunistic foragers and will scavenge or prey on a variety of animals.

Given the hunting range of eagles, it’s impossible to determine the exact source of this rodenticide poisoning. Analysis of liver tissue confirmed two different SGARs were ingested by the eaglet. In the past 15 years, the US EPA has taken steps to impose restrictions on rodenticides. SGARs are believed to be most harmful to wildlife and cannot be sold through general consumer outlets for use by the typical homeowner. SGARs can still be purchased online in commercial use quantities for use only by licensed pest professionals and agricultural users. Other rodenticides, called first-generation anticoagulant rodenticides (FGARs) and non-anticoagulant rodenticides, are still approved for residential consumer use only if enclosed within a bait station. It is illegal to place poisons outdoors except under highly regulated permitting conditions.

“Not only raptors, but many other kinds of wildlife have been the victims of unintentional rodenticide poisoning,” said Andrew Vitz, MassWildlife’s State Ornithologist. “Secondary exposure to rodenticides has been documented in other animals such as foxes, bobcats, and coyotes.” He also noted that other predatory wild mammals and unsupervised dogs and cats are vulnerable to unintended exposure.

To minimize harm to wildlife and pets, MassWildlife and Tufts Wildlife Clinic offer the following advice for homeowners and other concerned citizens:

“The choices we make as individuals and communities regarding rodent control and trash management practices can help prevent wildlife exposure to SGARs,” said Dr. Maureen Murray, Director of Tufts Wildlife Clinic. If the animal has clear signs of injury or sickness, it’s best to leave it in the wild. If injury or illness is evident, contact a licensed wildlife rehabilitator for advice before taking any action.

Concerned citizens can also help vulnerable wildlife by sharing this information and advice with friends, family, and others. Connect with groups who are working together to find practical, environmentally responsible solutions to issues relating to rodent problems. “The choices we make as individuals and communities regarding rodent control and trash management practices can help prevent wildlife exposure to SGARs,” said Dr. Maureen Murray, Director of Tufts Wildlife Clinic. (Source: Masswildlife)