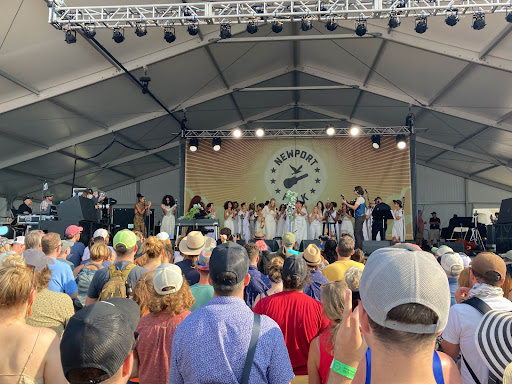 NEWPORT, RI — Be Present. Be Kind. Be Open. Be Together.

Those are the rules for the Folk Family at the Newport Folk Festival, founded in 1959 by George Wein who grew up in Lynn. Newport is unlike any other music event. That was evident this past weekend.

Magic happens at Newport every year. The pandemic year of 2020 was tough for the Folk. The festival was cancelled, as were nearly every public event. It was what I missed most. Newport is unlike any other fest. Attendees actually listen to the music rather than snapping selfies with their friends, looking at their phones more than the performers on stage, or talking through sets. And they relish discovering the stars of tomorrow. Brandi Carlisle, Shakey Graves and countless other stars of today found a supportive audience here at The Fort (Fort Adams State Park).

This is a community. A Facebook group has some 3000 members; This year members shared tips for first-timers and sent out pins and temp tattoos. 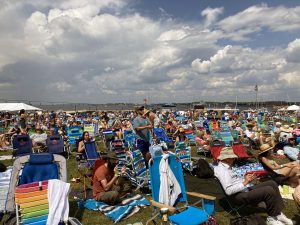 A rejiggered Newport Folk returned Friday with changes: one less stage, half the normal capacity (6000 daily), and six consecutive days instead of three. The name was also shortened: Folk On. Safety protocols were implemented: proof of full vaccinations were required in advance via the CrowdPass app or proof of a negative test 48 hours prior.

Jay Sweet, the Essex resident who guides the Newport fests (Jazz, too), greets early-arrivals before the gates open every day. Sweet now is executive producer of both Newport Folk and Newport Jazz.  In Jay We Trust is the mantra. Tickets sell out months before a single artist has been announced, such is their belief that Sweet and his staff will deliver the goods. 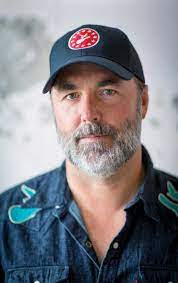 They certainly did this year. This year’s headliners were Americana firebrands Nathanial Rateliff and the Night Sweats, Jason Isbell and rising star Allison Russell.

Friday started out sunny and hot. Late-afternoon threats of thunderstorms shut down sets by Grace Potter, who would return Saturday morning, and Nathaniel Rateliff and the Night Sweats. Fans were screaming SOB.

Civil rights and gender equality have always been hallmarks of Newport Folk. It was an important element this year. The Resistance Revival Chorus, 28 glorious female voices, started the fest with their harmonic hymns of harmony. Sweet requested “What the World Needs Now (is Love)” and the message was embraced by the Folk Family.

“We are here to fight for those who believe in justice,” said the group’s leader to a rousing cheer.

Other Friday highlights included a lively rocking set by Ida Mae, a husband-wife duo from the UK, who were performing their first show in 15 months; the funky, sax-driven Black Joe Lewis band, which delivered one rump-shaker after another; and the highly personal songs of Lucy Dacus  who declared “I’m so nervous. But I think I’m a little less nervous here than if I was playing somewhere else.”

Shakey Graves solo set was Friday’s highlight, armed with a guitar, kick drum and incredible songs. His heart-tugging cover of the late John Prine’s “Mexican Home” brought many to tears. His own “Built to Roam,” “Dearly Departed” and especially “Where is My Mind” were sensational.

Margo Price, with an assist from the Resistance Revival Choir and hubby Jeremy Ivey, was terrific. Her modern country songs and covers (Joan Baez, Dylan and Steven Knudson’s “It Ain’t Drunk Driving if You’re Riding a Horse”) were aces.

On Saturday, Grace Potter, whose Friday set was cut short by the weather-induced evacuation but featured a wondrous “Put a Little Love in Your Heart,” was wonderful, displaying a playful, quirky personality that might have been enhanced by a glass of “breakfast wine.” Her husband, record producer Eric Valentine, served as her guitar tech. Her love songs “Stars” and “I Release You” ignited many crying jags and a raucous run-through of Jefferson Airplane’s “Somebody to Love” and “White Rabbit” had folks hooting and hollering.”

Randy Newman, 77, a national treasure, was sublime, performing his hits “Short People,” “You Can Leave Your Hat On” and “You’ve Got a Friend in Me.” Sardonic and cantankerous (the constant foghorn from a boat in the harbor had him cursing) he was at his hilarious, satirical best (“Sail Away,’ his classic song about a slave trade recruiter.” And his love songs had folks sobbing. 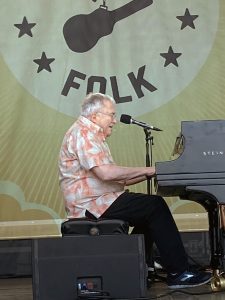 Jason Isbel, is Americana royalty and one of our finest singers and songwriters. He was assisted by wife Amanda Shires (fiddle and vocals) and guitarist Sadler Varden in a brilliant day-closing set.

The Newport Folk Festival … oops, I mean Folk On, continues through Wednesday.